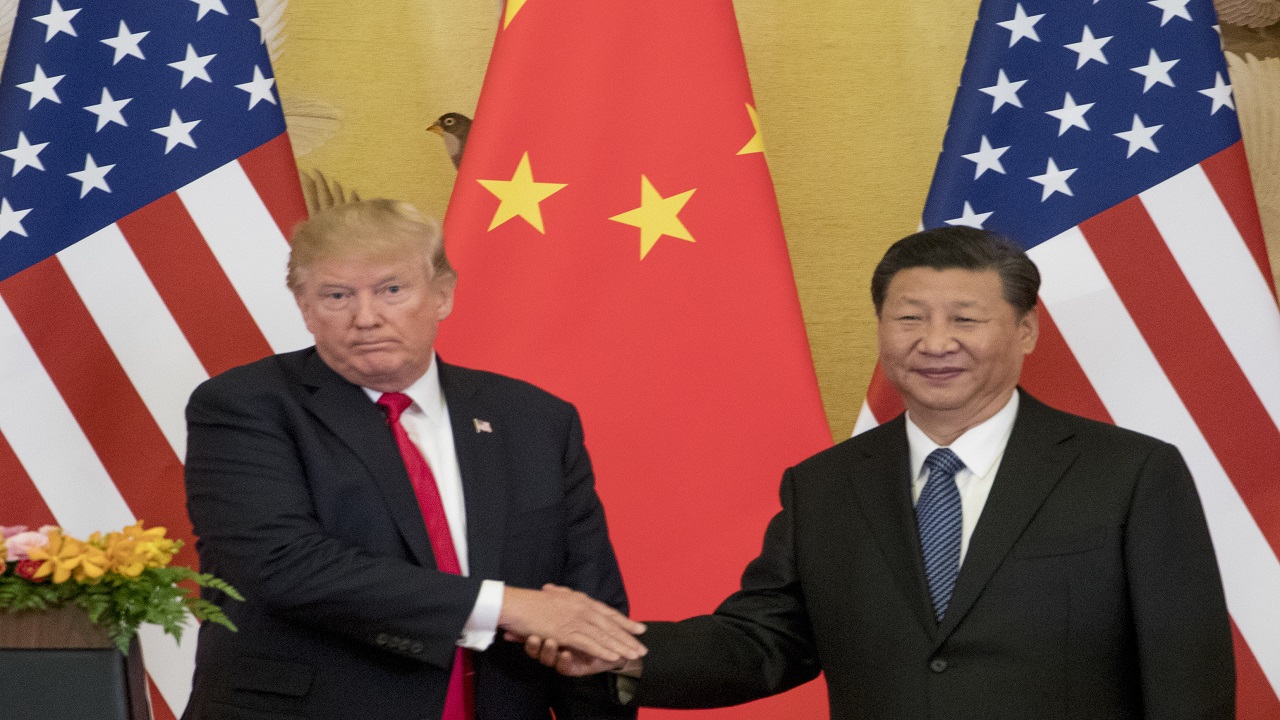 In this Nov. 9, 2017 file photo, President Donald Trump and Chinese President Xi Jinping shake hands during a joint statement to members of the media Great Hall of the People in Beijing, China. (Photo AP).

The Trump administration has renewed its threat to place 25 percent tariffs on $50 billion of Chinese goods in retaliation for what it says are China's unfair trade practices.

The White House also said Tuesday that it would place new restrictions on Chinese investment into the United States and limit U.S. exports of high-tech goods to China.

The threats come just over a week after trade tensions between the world's two largest economies had seemingly eased. Treasury Secretary Steven Mnuchin said May 20 that the trade conflict was "on hold." Mnuchin's comments followed a commitment by China to significantly increase its purchases of U.S. farm goods and energy products, such as natural gas.

Commerce Department Secretary Wilbur Ross is scheduled to visit China on Saturday to negotiate the details of that agreement. Some trade experts said the tariff announcement is likely intended to strengthen Ross's hand.

Other analysts, however, say the newly confrontational stance may be intended to appease congressional critics of a deal the Trump administration made Friday that allowed Chinese telecom giant ZTE Corp. to stay in business. The tariff threat is unlikely to derail ongoing talks, they said.

"This is really about Congress," said Derek Scissors, a China specialist at the conservative American Enterprise Institute. "I don't think it blows up a deal with the Chinese."

China's Ministry of Commerce responded in a mild fashion Tuesday. The Ministry said the White House's announcement "is contrary to the consensus the two sides have previously reached," according to China's official news agency, Xinhua. The statement did not reiterate China's own previous threats to impose $50 billion in retaliatory tariffs on U.S. goods.

Related article :A glance at US products affected by Chinese tariff hikes

Members of both parties in the House and Senate slammed the agreement the Trump administration reached with ZTE Friday, in which the Chinese firm agreed to remove its management team, hire American compliance officers, and pay a fine. The fine would be on top of a $1 billion penalty ZTE has already paid for selling high-tech equipment to North Korea and Iran in violation of U.S. sanctions.

In return, the Commerce Department lifted a seven-year ban on ZTE's purchase of U.S. components that it had just imposed earlier in May. China had complained strongly that the ban would put ZTE out of business, costing 70,000 jobs. Trump tweeted last month that the ban threatened too many Chinese jobs and he wanted to get the company "back in business, fast."

GOP and Democratic Senators attacked the deal as insufficient punishment for a company that defied U.S. sanctions policy.

The White House said Tuesday that it will focus the tariffs on cutting-edge technologies, including those that China has said it wants to dominate as part of its "Made in China 2025" program. Under that program, China aims to take a leading role in areas such as artificial intelligence, robotics, and electric cars.

The list of imports subject to the duties will be announced by June 15, the White House said, and the tariffs will be imposed "shortly thereafter." The list will be based on a previous compilation of 1,300 goods released in April that will be narrowed based on public comments the administration has received. The list includes computer equipment, aerospace parts, medical devices, and industrial machinery.

"If Beijing was under the impression that Trump's $50 billion of tariffs were actually on hold, they may find this confusing," Chad Bown, senior fellow at the Peterson Institute for International Economics, said. "It could very well complicate Wilbur Ross's visit."

Trump has bemoaned the massive U.S. trade deficit with China — $337 billion last year — as evidence that Beijing has been complicit in abusive trading practices. The White House, and many American companies, say that China forces U.S. firms to turn over technology as part of joint ventures with Chinese companies to gain access to its market. China also subsidizes many favored industries.

Trump has frequently focused on the trade deficit, urging China to boost its imports and lower the gap by $200 billion, while China has refused to agree to any dollar amounts.

Many experts and U.S. companies, however, warn that China's efforts to protect its high-tech industries and capture U.S. technology represent the larger threat.

The Trump administration said Tuesday that it plans to shorten the length of validity of some visas issued to Chinese citizens as part of a push to counter alleged theft of U.S. intellectual property by Beijing. The State Department said that under the new policy, U.S. consular officers may limit how long visas are valid, rather than the usual practice of issuing them for the maximum possible length.

Scott Kennedy, a China expert at the Center for Strategic and International Studies, said that many foreign leaders are learning to not overreact to Trump's threats, which are frequently seen as just part of negotiating strategy. That's good for global stability, he added.

"But that means the United States' credibility is incredibly low," he said. "I don't think you can keep doing about-faces, and have everyone pretend the threat is as ominous as it was before."

China-US tariff spat: Mostly losers, but some winners too

A glance at US products affected by Chinese tariff hikes