Trump sides with Saudis, other Arab nations against Qatar 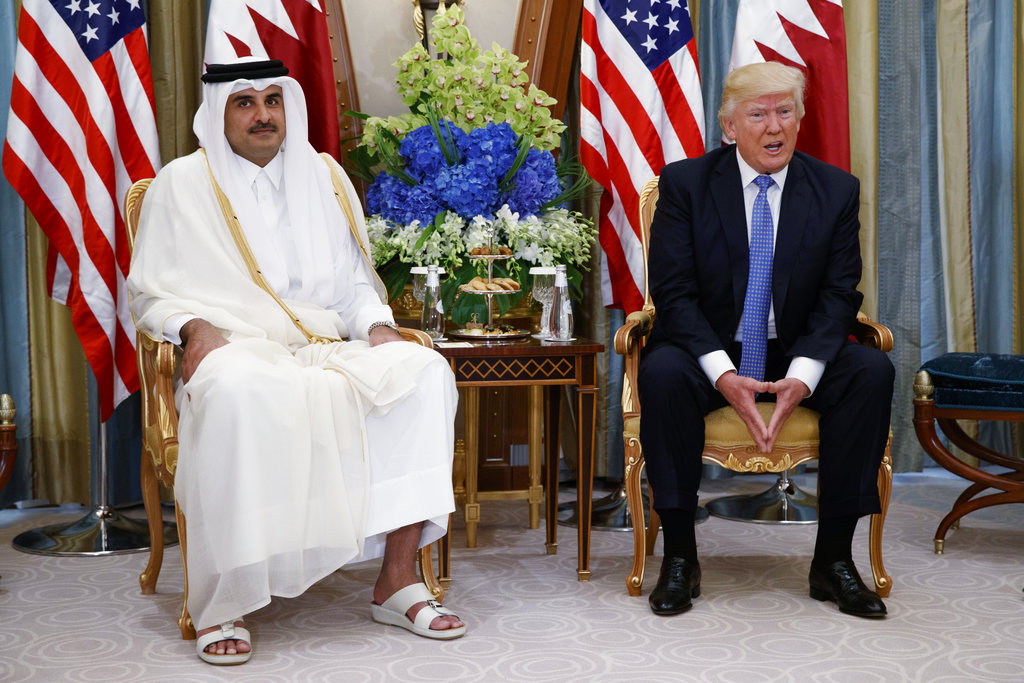 President Donald Trump sided with Saudi Arabia and other Arab countries Tuesday in a deepening diplomatic crisis with Qatar, appearing to endorse the accusation that the oil-rich Persian Gulf nation is funding terrorist groups.

Trump, in a series of early-morning tweets, sought to cast the rift between Qatar and its neighbors as a victory for his trip last month to Saudi Arabia, where he met with leaders from dozens of Arab and Muslim nations, including Qatar's emir. Trump said he'd stated during his trip that funding of "Radical Ideology" can't be tolerated, and added, "Leaders pointed to Qatar - look!"

"They said they would take a hard line on funding ... extremism, and all reference was pointing to Qatar. Perhaps this will be the beginning of the end to the horror of terrorism!" Trump said, arguing that his visit to Saudi Arabia was "already paying off." Qatar denies supporting extremism.

The president's sharp critique of Qatar, which is home to a major U.S. military base, inserted Washington directly into the crisis that has pitted the tiny country against Saudi Arabia, Bahrain, Egypt and the United Arab Emirates. Those countries announced Monday they were cutting diplomatic ties with Qatar, a move that ricocheted across the region as airlines suspended flights, ports closed to Qatari ships and anxious residents started stockpiling food.

Only a day earlier, Trump's secretary of state, Rex Tillerson, had adopted the opposite approach, calling for calm, while avoiding taking sides. During a news conference in Australia, Tillerson said the U.S. was encouraging the countries "to sit down together" and address irritants that he said had "bubbled up" for some time.

"If there's any role that we can play in terms of helping them address those, we think it is important that the GCC remains unified," Tillerson said, referring to the Gulf Cooperation Council, a regional club of nations.

It was unclear how Trump's broadside against Qatar and any resulting diplomatic fallout might affect the U.S. military presence in Qatar, where there are roughly 10,000 American troops and a major U.S. base. Another question was whether the mounting crisis would impede regional unity on fighting the Islamic State group and other extremist threats in the region, although U.S. military and diplomatic officials have thus far insisted they anticipate no change to cooperation on those efforts.

Qatar's neighbors have long accused the country of tolerating or even encouraging support for extremist groups, including al-Qaida's branch in Syria, formerly called the Nusra Front. Those nations have also objected to Qatari support for Islamist groups such as the Muslim Brotherhood in Egypt, whose political ideology challenges the system of hereditary rule in Saudi Arabia, the UAE and other nations.

Trump's harsh words for the Qataris were a departure from his rhetoric during his visit to Saudi Arabia, when he met with Qatar's emir and called the relationship "extremely good."

"We are friends, we've been friends now for a long time, haven't we?" Trump said at the meeting.

Facts muddy Trump's claim that US is cleanest country