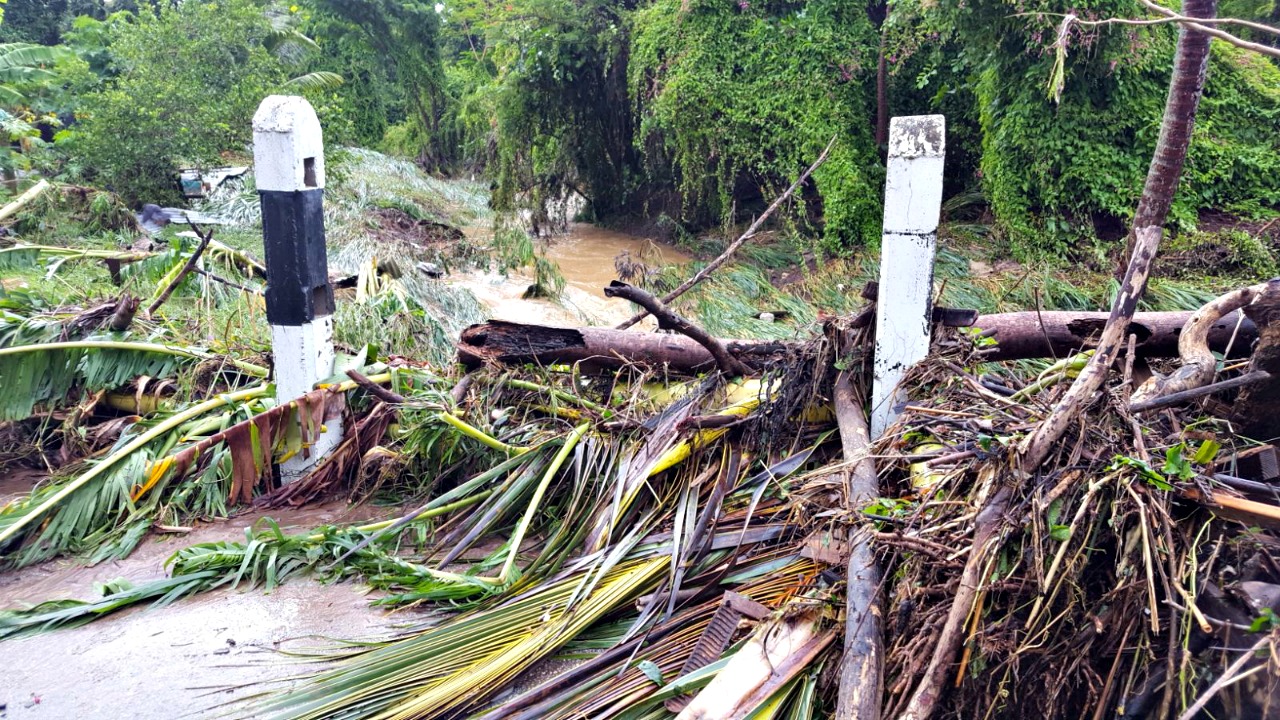 The resumption of business within the public sector and private sector is to be 12:00 pm today.

This just in from the Head of the Department of Emergency Management (DEM), Kerry Hinds.

The DEM and emergency services will remain active as they continue conducting assessments.

Hinds stressed, "we want no casualties" and urged persons to be cautious and take precautions as they seek to go about their business while damage assessment teams carry out their checks with fallen trees and downed power lines.

Meanwhile, employers are reminded to give consideration to the fact that some staff may have been more seriously impacted by the storm. They are also reminded that public transportation may not be fully operational on all routes by the scheduled 12 p.m. resumption of operations.

Until the all-clear is given persons are being called on to put safety first and stay put indoors.

“The tropical storm warning has been discontinued but that is not the same as the all-clear. It is two different things! The removal of the tropical storm warning just simply means that we are no longer under the threat of a storm, however, the emergency services still need to go and do their assessments and make sure that the roadways are clear and that it is safe for persons to go out.”

She advised, “Persons should remain at their current place of shelter until the official all-clear is given and stay tuned to the local media for further updates.”

The Flood warning and Small-craft warning remain in effect for now.

One lady was complaining about going to the Hilda Skeene Shelter in St. Philip last night for safety and it was closed, however, Skeete clarified that “12 Category 1 shelters were opened for this event.  Hilda Skeene Primary School was not one of them.”

The Minister of Industry, International Business, Commerce and Small Business Development, Donville Inniss is encouraging persons to only return to business as usual once the all-clear is given.

Having seen the state of affairs in Speightstown which is partially submerged, the Industry Minister said that persons can expect assistance after the all-clear and inspections have been conducted.

“Depending on the nature and extent of the damage, but we are always willing to assist and assistance doesn’t always have to come in the form of financing. There are other logistical support that we can render either through the ministry directly or through the coordinated efforts of other state agencies, but first you need to do an assessment and see what is. Suffice to say to all Barbadians – individuals and businesses, that the government will render all possible assistance to those in greatest need.”

He highlighted the damage at Providence, and the significant flooding in Speightstown, and he said that they dispatched the Defence Force to Speightstown “in case anyone is trapped”. But he beseeched persons to remain indoors where possible because rescue personnel can’t act thoroughly until water dissipates. “We can’t realistically respond while rains continue.”

In addition, he asked persons to “bear with us for the next couple of hours. There is no all clear given, so cooperate with us and stay safe.”

The AG indicated that there are no reports of opportunity crimes and he echoed the word of caution from the police spokesperson Acting Inspector Roland Cobbler.

Transport Board offline until all-clear

Minister of Transport and Works (MTW), Michael Lashley told the nation that they have mobilised all of resources, “all depots are on standby.”

Lashley was happy to share that before this weather, the MTW had a meeting on Monday and made sure that they had necessary and vital equipment in place.

“Recognising we will have some problems in St. Peter, we will try to respond as quickly as possible.”

In terms of his constituency in St. Philip North, he said that thus far he has received no indications of major damages or dislocation by his constituents. He said, they are just waiting for the all-clear to dispatch a team because “one or two persons had leakages in their homes but minor.”

In relation to the Transport Board, Lashley said that they are waiting on the all-clear as well. “As soon as the all-clear is given, we will express to the travelling public when buses will back out there running.”

AG Lynda Holder told Loop that they are keeping persons updated via Facebook as well.

“Please be advised that the all clear has not yet been given with regards to Tropical Storm Harvey. As such the buses operated by the Transport Board are not yet back on the road. It must be noted that when the all clear is given our services will be resumed in a staggered manner as is the normal procedure.”

Damien Catlyn, Officer with the National Petroleum Cooperation (NPC) said that their system island-wide was not damaged as far as they know and gas pressures are consistent and normal. However, he stressed that once the all-clear is given the teams will go out and check the entire network but with an initial concentration on the North as that part of the island was severely impacted.

“We recognise that there has been heavy flooding in the North so we will be concentrating our efforts in the North for now, but we will be inspecting our network. If you have any reports of leaks you can call us at 430-4000 or 430-099.”

Some persons complained of power outages throughout the night and there has been a reported burst pipe in Kendal, St. John, in terms of utility disruptions. The Barbados Water Authority also indicated that some pumping stations are going to be closed down this morning.

CARIFESTA XIII opening ceremony and parade will be rescheduled according to the Minister of Culture, Sports and Youth, Stephen Lashley. The event was to be held this evening.