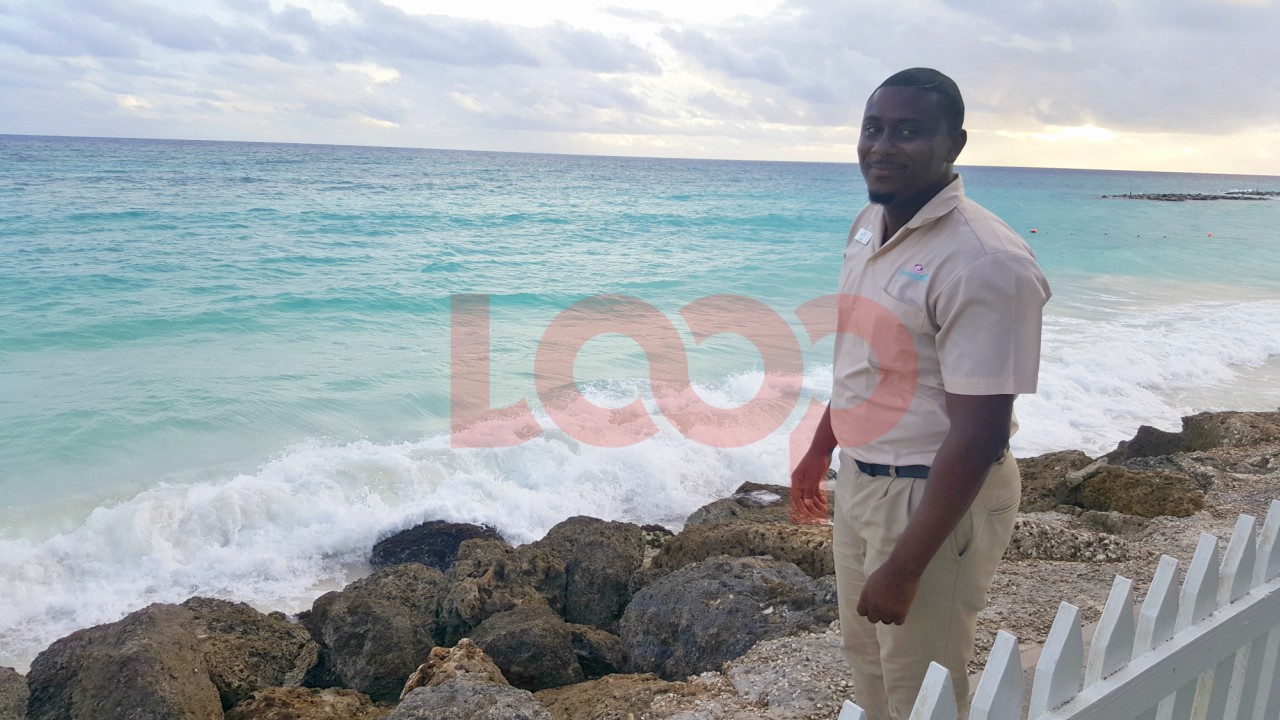 Shay Durham standing by the boulders where the women got trapped by the waves.

Quick thinking and action by a 25-year-old security guard at the Bougainvillea Hotel saved two tourists from being maimed, seriously injured and even possibly death.

Security guard, Shay Durham foresaw danger and put himself in a strategic position to help save the lives of the two women who eventually got into danger at sea.

October 21, 2017, will always live on in Shay’s memory because it was one day when his quick response time and reflex actions saw him spring into action and save two lives.

The Garrison Secondary graduate said that he saw the two women while on his normal patrol and something said to him, keep an eye on them and their boogie board. He went with his gut and observed the two women for a time. As he was proceeding from his post by the Conchita Point, walking along the coastal perimeter of the hotel towards the Siam Restaurant, he heard the ladies yell, “We can’t get back in!”

Without hesitation, Shay jumped over the fence and made his way onto and down the huge boulders at the water’s edge. He told the ladies to get off of the boogie board and they did but then out of panic, they tried to climb back aboard. However, one lady was caught in the swells and currents and the wave action pushed her straight onto the rocks near where he stood. With her face down the waves were hammering her from behind, so Shay quickly extended his hand to her begging her to grab hold and help him pull her up to safety. Fearful and anxious she finally held up her hand and he quickly hauled her up. Then he consoled her and got her up to the boardwalk platform. 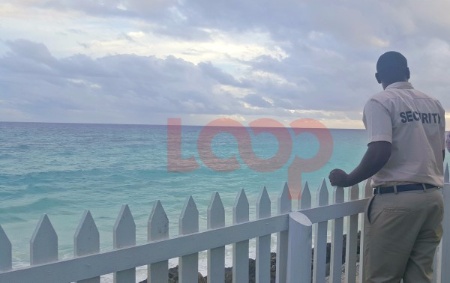 Next up was her friend who was balancing on the boogie board but not out of harm’s way. Moving swiftly he got himself in line with her and watched as the waves brought her straight to him by the jagged rocks. Calling on her to give him her hand, she cried, “I can’t!” Shay kept a level head and urged her saying that she had no choice as the waves were coming fast and furiously. Eventually, she extended her hand and he pulled her up but they were not to safety yet. Encouraging her to take a step up the rocks, she was panicky and shaking her head ‘no’. When he convinced her to put one foot in front of the other, she took one step and cried out, ‘No! The rocks are too pointy!” Shay said that they couldn’t stay there and eventually, drawing on some willpower, the two made their way across and up the rocks to safety.

Shay said he never was in such a situation, on duty or otherwise, but he was glad that he kept his cool and confidence throughout the tense, stressful moments.

The two women who appeared to be in their early 30s had American accents and were staying at a neighbouring property, but that did not stop Shay from attending to their needs and working to ensure their safety. They walked back to their hotel after the ordeal with bruises and constantly saying, ‘Thank you, thank you, thank you!’ to Shay. Shay said all he wanted to do afterward was make sure that they were “good” and he watched them depart.

On learning of Shay’s daring rescue, the management and owners of the Bougainvillea Hotel were “very, very happy” about his courageous efforts.

Jamal Griffith, Group Sales and Marketing Manager said that the team was glad that Shay had the foresight to look down and watch the pair come down.

Griffith said that when caution flags are up on the beach, regardless of the colour – whether yellow or red, at Bougainvillea Hotel it is their policy not to distribute water sports equipment because not only can it put the tourists or users in danger, it could put their guys, like Shay, in danger as well.

Sea bathers urged to use beaches with lifeguards