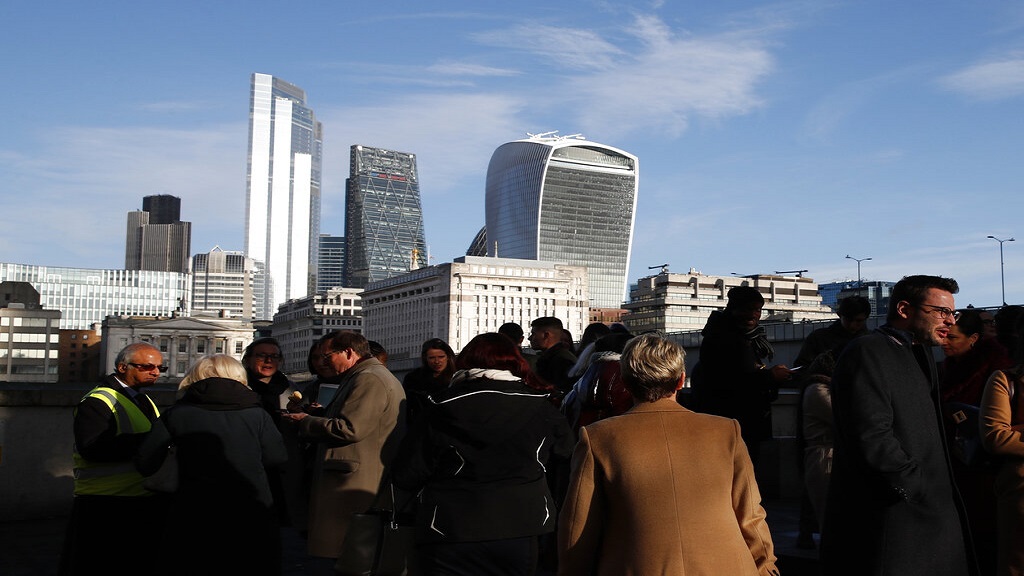 While Johnson's triumph buoyed optimism that he would end the country's long-running political stalemate, it virtually guarantees the UK will leave the European Union on January 31 and starts the clock on efforts to negotiate a trade deal with the bloc by the end of 2020.

As prime minister prepares to outline his government's priorities Thursday in a speech to lawmakers, the financial industry is seeking assurances that service businesses like theirs won't lose the unfettered access to European markets that has underpinned growth for more than four decades.

“Services are the lifeblood of the UK economy and vital to its growth," said Catherine McGuinness, policy chair at the City of London Corp., the historic base for the UK financial services industry. “Politicians across the spectrum should recognize that financial and professional services make a significant contribution, employing 2.3 million people across the country – two-thirds outside of London.''

The UK financial industry, whose roots stretch back to the investors who financed the British Empire and insured its ships, has flourished as a gateway to Europe for companies from around the world. That helped make London the world's top financial center before Brexit eroded its advantages.

New York moved past London into the top spot last year, according to a ranking of 114 financial centres compiled by Z/Yen, a London-based commercial think tank, and the China Development Group.

In the most recent rankings, published in September, London dropped further behind New York, with Hong Kong just behind in third place. The Global Financial Services Index is based on information provided by more than 3,300 financial professionals around the world.

"Respondents in London continue to be less optimistic than those in other centres, reflecting the continuing uncertainty about future trading relations with the EU and the rest of the world after Brexit,'' the report said.

Rather than wait to see the outcome of future discussions, firms ranging from the global investment bank Goldman Sachs to British insurance company Aviva have announced plans to relocate some operations to other EU countries to ensure they maintain a toehold in the bloc.

At least 332 firms in the UK banking and finance industry have prepared for Brexit by relocating part of their business, moving staff or setting up new entities in the EU, according to a study by New Financial, a London-based think tank. It also identified some 5,000 staff moves or local hires made in response to Brexit, stressing that the figures are likely to rise when the terms of Britain's departure become clear.

“Financial services have resigned themselves to have a fairly hard Brexit from their point of view," said Jonathan Portes, a senior fellow at The UK in a Changing Europe, a non-partisan think tank at King's College London. “What we will essentially see is a slow drift away from London being by far the most dominant financial centre in Europe."

Johnson's Brexit deal covers only the so-called divorce issues, including payment of the UK's financial obligations and citizen's rights. The future relationship between Britain and the EU, including a potential free-trade agreement, will be the subject of a second round of negotiations that the government wants to complete by the end of next year.

TheCityUK, which represents Britain's financial services, said that so far Brexit talks have largely focused on trade in goods, neglecting the services sector, which accounts for 80 per cent of the economy.

“Ministers should seek to rectify this, consult widely, and focus their efforts on how the UK.’s global leadership in services industries like ours can be sustained and enhanced over the course of this Parliament,” Chief Executive Miles Celic said.

Financial services alone accounted for 6.9 per cent of the UK economy and generated 29 billion pounds ($38.6 billion) of tax revenue in the 2017-18 fiscal year. Related professional services such as accounting and legal services push the industry's total contribution to 10 per cent of GDP.

The EU has already rejected Britain's continued participation in the bloc's ``passporting'' system, which allows financial firms that are authorized in any EU country to do business across the European Economic Area, which comprises all 28 EU countries plus Iceland, Norway and Liechtenstein.

That leaves Britain and the EU to determine so-called "equivalence'' agreements, which would permit limited access to specified areas if both sides agree to align regulations. Such agreements can be cancelled by either side, however, and are subject to wider political considerations.

“This is going to leave loads of uncertainty because these things are not going to be negotiated in a hurry,'' said Vicky Pryce, chief economic adviser at the London-based Centre for Economics and Business Research.

Johnson's government has said it is seeking a ``Canada-style free-trade agreement,'' stressing that the EU's deal with Canada covers trade in services.

But experts question whether the UK can hammer out a similar deal by the end of next year. It took Canada more than five years to negotiate its agreement with the EU, plus two more for it to be approved by each EU country.

Johnson says he won't ask for an extension and will introduce legislation to rule one out, leaving open the possibility that Britain could still leave the EU without a trade deal in a little over a year. Economists forecast this would have tough consequences for jobs and investment.

“The most important thing to remember is that Brexit may get done from a legal point of view on Jan. 31, but that does not get Brexit done from an economic point of view,'' Portes said. “British businesses are going to have to face the fact that uncertainty is going to continue.’’

That has weighed on financial markets.

The FTSE 100, Britain's benchmark stock index, has gained four per cent since last week's election, beating the S&P 500 in the U.S. and Germany's DAX. But the long-term picture is less positive. While the FTSE 100 has risen 14 per cent since Britain voted to leave the EU in June 2016, the S&P 500 jumped 51 per cent in the same period and the DAX 31 per cent.

The pound jumped briefly after the election, adding to a rally that began in August on optimism Johnson would secure a deal with the EU. The currency is still down almost 10 per cent since the referendum.

“Anyone hoping that the election would draw a line under Brexit was sadly mistaken,'' Craig Erlam, senior analyst at market research firm Oanda.com, said in a note to investors headlined ``Christmas Gift or Exquisitely Wrapped Lump of Coal?''

UK's Johnson seeks to rule out Brexit delay beyond 2020