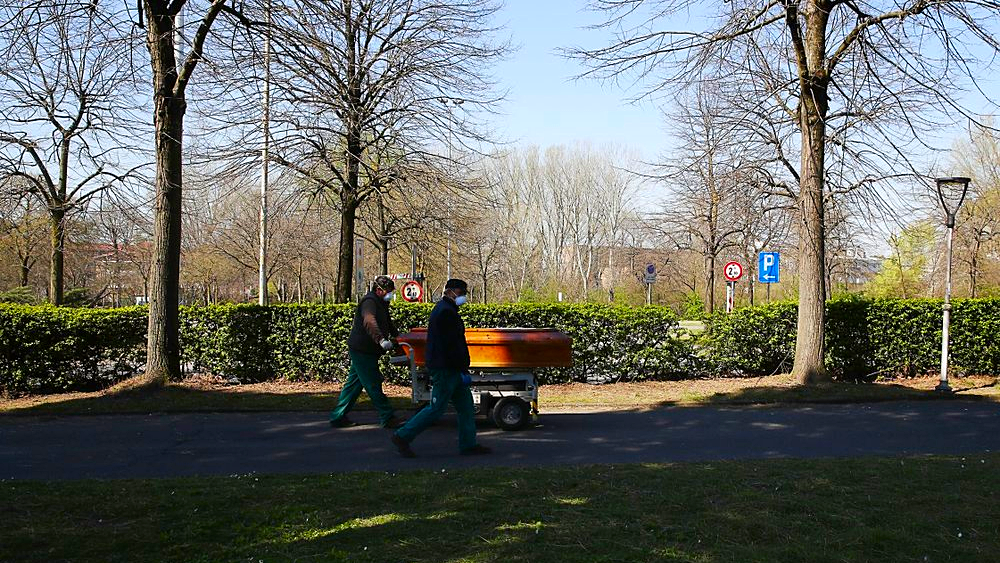 Two men carry a coffin to the Melegnano cemetery's morgue, outskirts of Milan, Italy, Tuesday, March 24, 2020. For most people, the new coronavirus causes only mild or moderate symptoms. For some it can cause more severe illness, especially in older adults and people with existing health problems. (AP Photo/Antonio Calanni)

Infections and deaths globally from the coronavirus are expected to increase "considerably" when global figures are published later Tuesday, the World Health Organization (WHO) said.

Overnight reporting showed 85% of the new cases are being reported in Europe and the United States, said Dr Margaret Harris, a WHO spokeswoman.

On Monday, WHO counted more than 334,000 total cases globally.

Harris said: "but in fact, the outbreak is accelerating very rapidly and the case numbers we received overnight will put that up considerably."

Spain began storing bodies in an ice rink converted into a makeshift morgue, as virus deaths rose in the country. 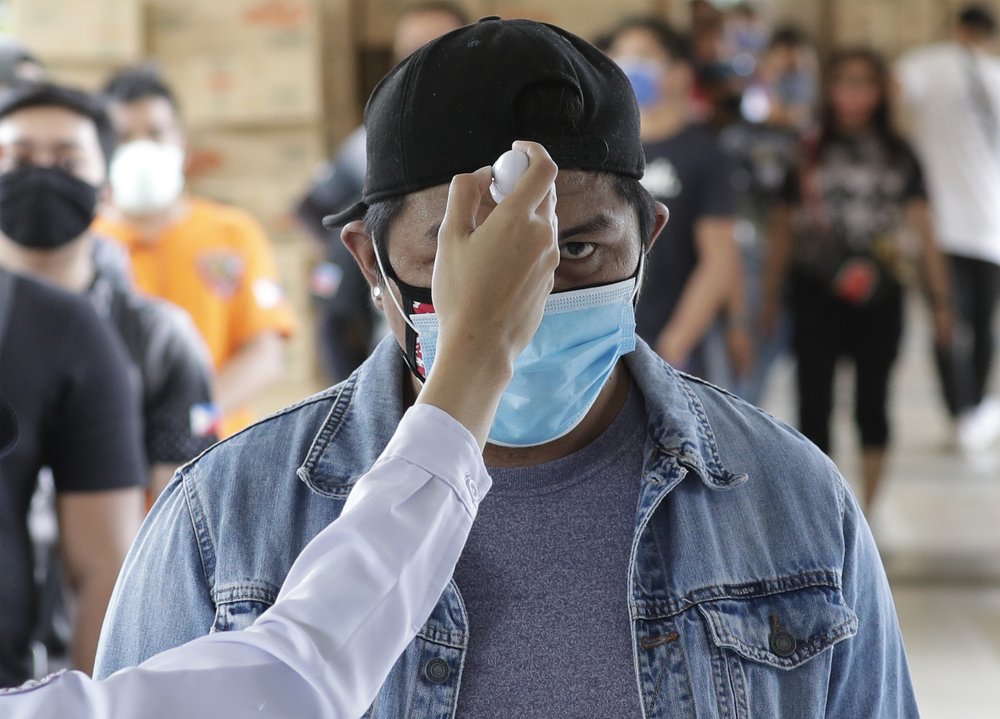 (Photo: Temperatures are checked before people enter a local city hall during a community quarantine aimed to prevent the spread of the new coronavirus in Manila, Philippines, Tuesday, March 24, 2020. For most people the new coronavirus causes only mild or moderate symptoms, but for some it can cause more severe illness. (AP Photo/Aaron Favila))

As virus deaths mounted and Americans hoped for some economic relief from their divided government, health officials and leaders warned that the world was entering a critical period that would determine just how deeply the pandemic slices through their nations.

While Chinese authorities said they would finally end a two-month lockdown in hard-hit Hubei province where the coronavirus outbreak first began, nations in Europe, North America and elsewhere pressed harder to enforce the stay-at-home restrictions placed on 1.5 billion people worldwide.

Those measures could significantly impact the trajectory that the virus will take as it spreads across the world.

"We can change the trajectory of this pandemic."

On Capitol Hill, a nearly $2 trillion plan that would prop up businesses and send checks to American households has stalled in Washington for days, but officials said they expect to reach a deal later Tuesday.

Democrats have argued that it was tilted too much toward corporations rather than helping American workers and health care providers.

It appears that it will be soon that the US, which has more than 46,000 infections and 530 deaths, overtakes hard-hit Italy in the number of infections. 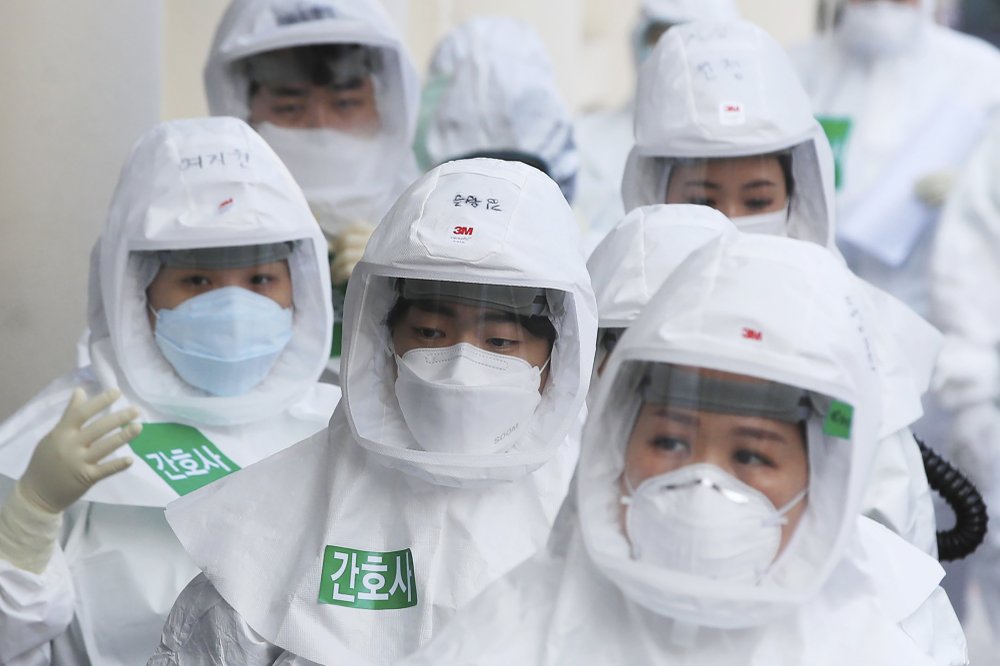 (Photo: Medical staff members arrive for a duty shift at Dongsan Hospital in Daegu, South Korea, Tuesday, March 24, 2020. For most people, the new coronavirus causes only mild or moderate symptoms, such as fever and cough. For some, especially older adults and people with existing health problems, it can cause more severe illness, including pneumonia.(Han Jong-chan/Yonhap via AP)

Authorities say the US is on track to eventually overtake China's nearly 82,000 infections and how soon that happens depends on how seriously Americans take the state-at-home restrictions.

In New York, now one of the world's biggest virus hot spots, authorities rushed to set up the thousands of hospital beds they will need in just weeks to protect the city's 8.4 million people.

More than 12,000 people have tested positive in the city and 125 have died. A state-wide lockdown took effect Monday.

The mayor warned that the city's hospitals are just 10 days away from shortages in basic supplies, while the state's governor announced plans to convert a New York City convention centre into a hospital.

"This is going to get much worse before it gets better," New York Governor Andrew Cuomo said.

British Prime Minister Boris Johnson tightened all travel restrictions, demanding that people do not visit family members or friends and stick with only the people they live with.

Nearly 384,000 people worldwide have been infected and more than 16,500 have died from the virus, according to by Johns Hopkins University.

In Italy, Spain and France, the pandemic pushed national health systems to their breaking points.

The outbreak has killed more than 6,000 Italians, the highest death toll of any country.

Officials said Monday the virus had claimed just over 600 more lives, down from 793 two days earlier, offering some glimmer of hope.

The risks remain for doctors, nurses and others on the front lines: Italy has seen at least 18 doctors with the coronavirus die. Spain says 12% of its cases — more than 3,900 health care workers — have become infected. 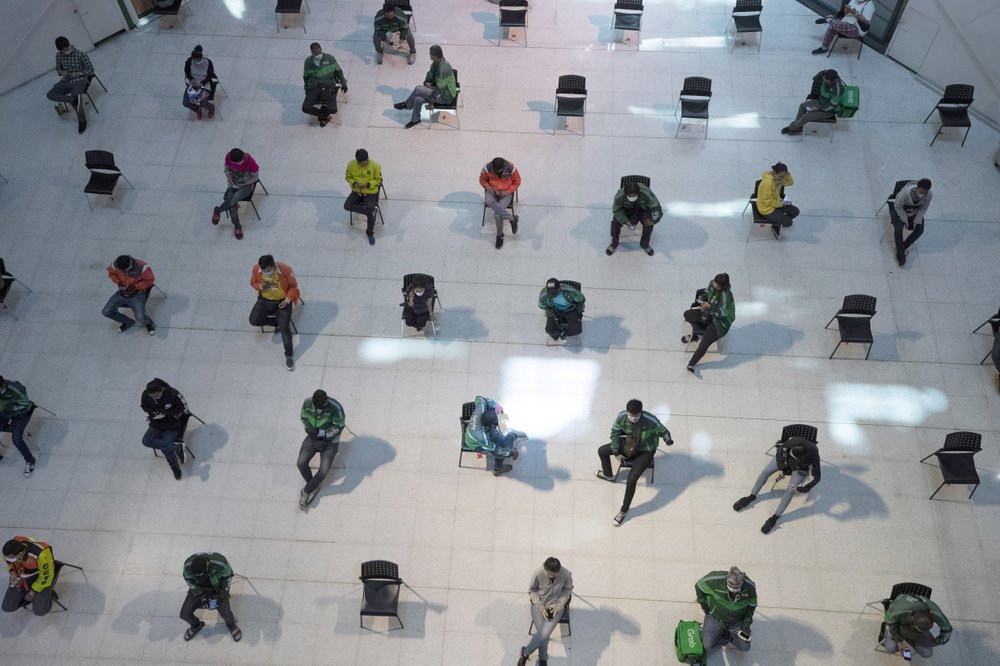 (Photo: People practice social distancing as they sit on chairs spread apart in a waiting area for take-away food orders at a shopping mall in hopes of preventing the spread of the coronavirus in Bangkok, Thailand, Tuesday, March 24, 2020. (AP Photo/Sakchai Lalit))

A Madrid ice rink is now being used as a makeshift morgue as the number of bodies of virus victims in the Spanish capital mounts.

Overwhelmed by a virus hotspot in its eastern city of Mulhouse France was getting help from hospitals in neighbouring Germany and Switzerland.

Confusion rippled through Britain on the first morning after Johnson ordered a three-week halt to all nonessential activity. The government has told most stores to close, banned gatherings of three or more people and said everyone apart from essential workers should leave home only to buy food and medicines or to exercise. But photos showed crowded trains Tuesday on some London subway lines.

Asian stock markets reacted positively Tuesday, markets in Japan and South Korea posting significant gains after the Federal Reserve said it will lend to small and large businesses and local governments to help them through the crisis.

The move toward lockdowns has been influenced by the success of such measures in China, where the virus was first found late last year in the central city of Wuhan.

China barred people from leaving or entering the city on January 23, and soon expanded that to cover most of Hubei province, home to 70 million people.

On Tuesday, after more than a week in which China said the vast majority of new virus cases were imported from abroad, authorities said the restrictions in Hubei would end. People cleared by health authorities would be able to leave the province after midnight. Wuhan itself will remain locked down until April 8.

For most people, the coronavirus causes only mild or moderate symptoms, such as fever or coughing. But for some older adults and people with existing health problems, it can cause more severe illness, including pneumonia. Some 102,000 people have recovered, mostly in China.

In contrast to other European nations, German health authorities offered some hope that the country has flattened the exponential spread of the virus, which has already infected nearly 30,000.

Chancellor Angela Merkel's government approved a massive new aid package to cushion the economic fallout of the outbreak, offering more than 1 trillion euros (USD $1.1 trillion) to tide small companies and entrepreneurs through closures and to pump capital into bigger companies.

But around the world, industries big and small kept shutting down. Boeing announced it was suspending production in the Seattle area, where it has two mammoth aircraft plants employing about 42,000 people.

On the sports front, Japan's prime minister and the head of the International Olympic Committee were to hold talks Tuesday as they consider postponing this summer's games in Tokyo.