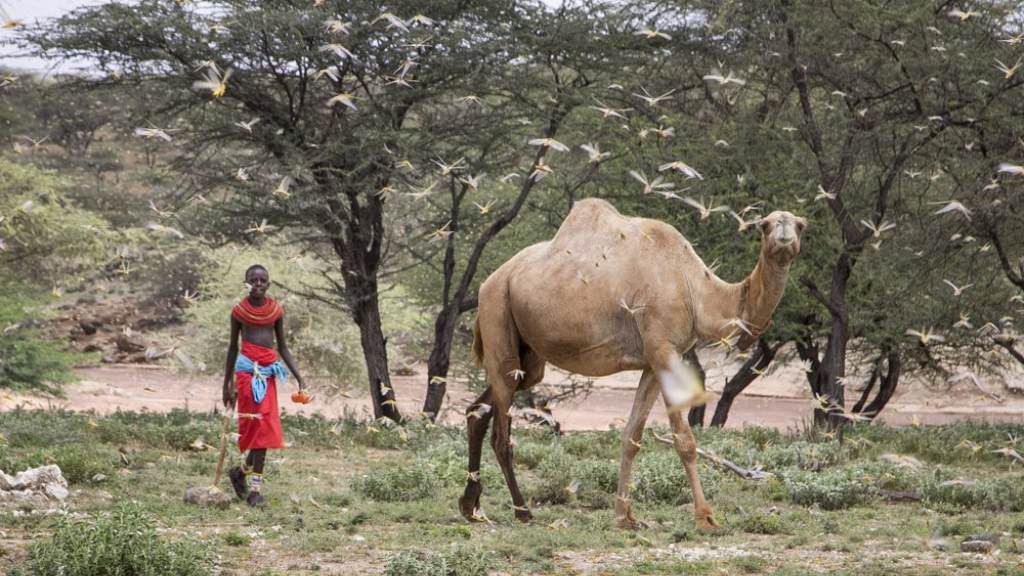 In this photo taken Thursday, Jan. 16, 2020, a Samburu boy walks behind his camel as a swarm of desert locusts fills the air, near the village of Sissia, in Samburu county, Kenya. (AP Photo/Patrick Ngugi)

The worst locust outbreak that parts of East Africa have seen in 70 years needs some $76 million to help control and the money is "required by, actually, now," the United Nations said Thursday.

So far just $15 million has been mobilized to help stop the outbreak that threatens to worsen an already poor hunger situation for millions of people in Kenya, Ethiopia, Somalia and elsewhere, Dominique Bourgeon, emergencies director with the UN Food and Agriculture Organization, told a briefing in Rome.

"You can imagine that a country that has not seen such a thing in 70 years is not well prepared," he said of Kenya, East Africa's economic hub.

The outbreak, blamed in part on a changing climate, now threatens to spread to South Sudan and Uganda and new rains in the weeks to come will fuel fresh vegetation and a new wave of breeding. The outbreak might not be under control until June when drier weather arrives, authorities have said.

But by then the number of locusts, if left unchecked, could grow 500 times, experts have warned.

"If after April the money has come, it's somehow useless," FAO chief Qu Dongyu told the briefing. "So the timing, location, is crucial."

Already the locusts, moving in swarms of hundreds of millions, have stripped some crops bare. An Ethiopian representative at the briefing told the FAO that some farmers in Africa's second-most populous nation have lost 90% of their production.

The locusts have been moving steadily toward Ethiopia's Rift Valley, the country's breadbasket, the UN says.

Authorities have said aerial pesticide spraying is the only effective control in the outbreak, but officials in Kenya and elsewhere have said more planes and more pesticide are needed.

A single swarm can contain up to 150 million locusts per square kilometre of farmland, an area the size of almost 250 football fields, regional authorities say. One especially large swarm in northeastern Kenya measured 60 kilometres long by 40 kilometres wide (37 miles long by 25 miles wide).

"We depend a lot on this season and we worry that the locusts will destroy our harvest and we end up remaining hungry through the rest of the year, waiting for October for the next cropping season," one farmer in Kenya's Kitui county, Esther Kithuka, has told the FAO.

Even before this outbreak, nearly 20 million people faced high levels of food insecurity across the East African region long challenged by periodic droughts and floods.

Mottley says decisions need to be made to halt climate change