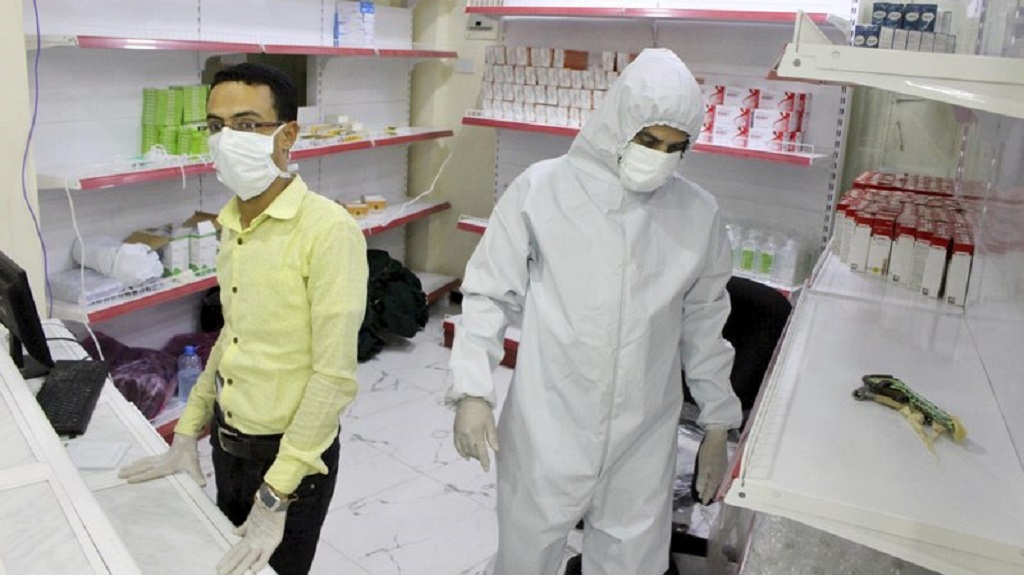 FILE - In this May 12, 2020 file, photo, Yemeni medical workers wearing masks and protective gear stand at the entrance of a hospital in Aden, Yemen. (AP Photo/Wail al-Qubaty, File)

The United Nations warned Wednesday that its programs to fight the coronavirus in war-torn Yemen might have to stop by the end the month unless they get an immediate injection of cash.

The warning comes a day after a UN appeal for countries to fund emergency aid in the Arab world's poorest nation fell a billion dollars short of what aid agencies needed — $2.41 billion — to cover essential activities from June to December.

"This will severely handicap efforts to contain the outbreak, which is already spreading rapidly," said Hayat Abu Saleh, a spokesperson for the UN Officer for the Coordination of Humanitarian Affairs.

At least 31 major UN programs in Yemen, covering essentially every sector, from food to health care and nutrition, were at "serious risk of significant reduction or closure," she said.

Related article :Coronavirus cases in the Caribbean as of June 3 at 9 am: 29,153

The coronavirus is threatening to decimate Yemen's health care system, already ravaged by more than five years of civil war. Abu Saleh predicted the UN would likely start winding down some of its disease outbreak and control programs next month, including efforts to contain cholera, malaria and dengue fever, among other diseases.

These programs help to protect 18 million people, she said. Abu Saleh also voiced concerns about 360,000 children suffering from severe malnutrition that the UN is trying to assist. "Without new funds, these programs will see severe cuts starting in July," she said.

Tuesday's conference raised $1.35 billion — half of what is needed and half of the $2.6 billion that countries pledged at the same conference last year.

Saudi Arabia, which co-hosted this year's UN pledging event, said it would pay half a billion dollars in aid for Yemen, $300 million of which will be funnelled to the UN and related aid agencies. It was the largest amount pledged by any country.

A key factor contributing to the dwindling funds is obstruction by Yemen's Houthi rebels, who control the capital, Sanaa, and most of the country's north.

The United States decreased its aid to Yemen earlier this year, citing interference by the Houthis.

Separately, Jan Egeland, the secretary-general of the Norwegian Refugee Council, also called for the money pledged on Tuesday to be "disbursed immediately" and urged warring parties to stop fighting and focus their efforts to fight the pandemic.

"Donors who failed to put their hands in their pockets must step up," he said.

"But money alone is not enough," Egeland added. "These pledges are worth little if people are still fleeing from bombs and crossfire and their hospitals attacked."

Since April, authorities in areas controlled by Yemen's internationally recognized government have reported around 400 coronavirus cases, including 87 deaths. The Iran-backed rebel Houthis have declared only four cases, including one death.

The World Health Organization believes that there is a significant underestimation of the outbreak, which could further hinder efforts to get supplies into Yemen needed to contain the virus.

Yemen's civil war erupted in 2014, when the Houthi rebels captured Sanaa, forcing the internationally recognized government to flee. In the spring of 2015, a US-backed, Saudi-led coalition began a destructive air campaign to dislodge the Houthis while imposing a land, sea and air embargo on Yemen.

The conflict has killed more than 100,000 people and driven 4 million Yemenis from their homes. Cholera epidemics and severe malnutrition among children have led to thousands of additional deaths.