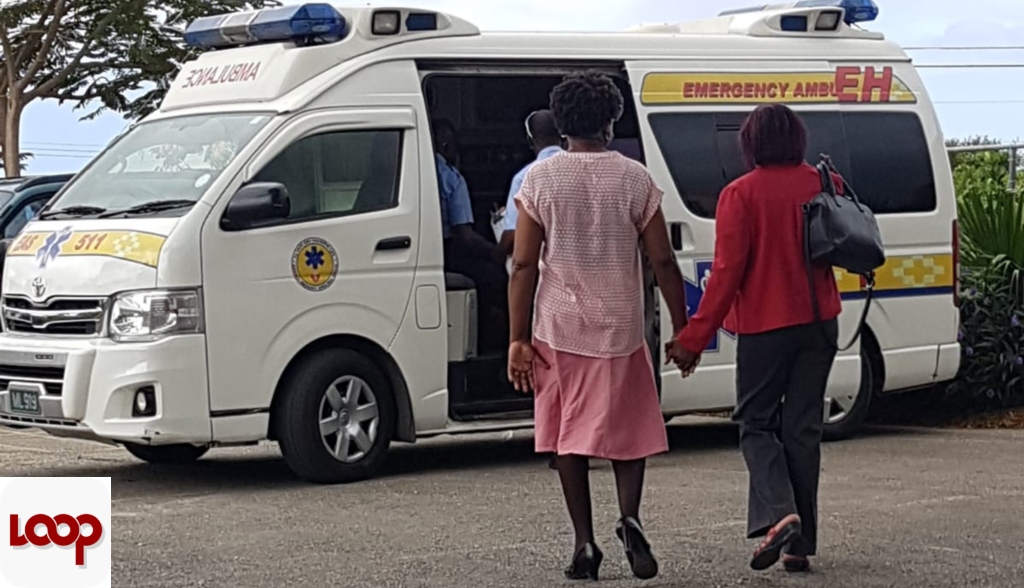 Teachers walking to the ambulance at the Elliott Belgrave School as the EMTs assist the little boy in distress.

Residents in Gays Road near the Elliott Belgrave Primary School, formerly Boscobel Primary, want relief from the constant smoke inhalation for the little children and the staff at the school, as well as for themselves.

This morning the entire school was evacuated. The students went up Gays Road to the Boscobelle pasture in St. Peter and pavilion to try to escape.

When Loop News arrived the sky was clear but one little boy was visibly in distress, having problems breathing, and in less than an hour’s time, an ambulance responded to the school to tend to the student.

A senior member of staff off the record said “The smoke? It is a huge problem!” Another staff member shared that almost 30 percent of her small class of students are asthmatic and it is very concerning. All week some staff members have been administering asthmatic medication. The school has about 92 students.

Loop took to the community to find out more about this problem.

Explaining that her son is 13 years old now, one mother and resident who chose to remain anonymous said that this has been a burning issue for quite some time now.

She said that people from in Gays Road have had to venture above the pavilion over to the other side where the fires are started to try to get the people to stop, or seek residence at other family members until the smoke clears.

“They [the fires] are usually above or in Gays itself and sometimes as early as 5:00 am, and 4:30 on mornings, like this morning, it was honestly lil after 5:00 am when they had the big smoke thing this morning.”

She said, “no consideration at all.”

Asked if there are any nurseries or daycare facilities in the area along with the primary school, she said, “No but for sure there are lots of asthmatics in the gap, in the area itself definitely and then you have a lot of newborn babies. So right behind me here we have three newborn babies and they are usually the ones who have to go over where it is, to have the fire out.”

In the past she said that though she herself has never requested assistance from the Barbados Fire Service, she admitted she has sought help from the Royal Barbados Police Force. “I have called the police before, even if it is some person roasting breadfruits. It’s a fire to me.”

With school staff complaining anonymously to Loop News, the resident who has lived practically across the street from the rural primary school all her life continued stressing that it’s really been a problem all week. And she says it puts out parents and guardians too, as they have to put plans in place in case the school closes suddenly.

“Yesterday,  I was home, I think probably lil after 9:00 am, my sister had to collect my niece and then the day before then she had to collect her and the other day, ‘cause yesterday I even saw the teachers leaving. So I tell myself, you know what, they probably just had it! They probably had it.”

Loop understands that most if not all the teachers left the compound yesterday after three days straight of smoke in the school’s vicinity, leaving the principal on the compound to wait for parents and guardians to collect their children and wards.

Another senior lady who lives further down Gays Road beyond the school said that “sometimes it comes from all up by de church – The St. Philip-the Less in Boscobelle.”

She said that with the school there, “they should be more considerate”.

Sounding most frustrated with the whole situation, shopkeeper and resident near the school Dorothy Hutchinson said that the problem is not going to cool down when school breaks for Christmas Holiday today, December 13, 2018.

“I mean it gonna be worse from tomorrow cause they know that de school gine be closed and they gine keep… Every night, every morning yuh getting de problem all de time.

“They know the children at school and they still lighting up the fire and thing up there. It’s ignorance!

“Every single day this week, Monday, Tuesday, and Wednesday children had to come home from school ‘cause they have a lot of asthmatics so they had to went home, de teachers too.