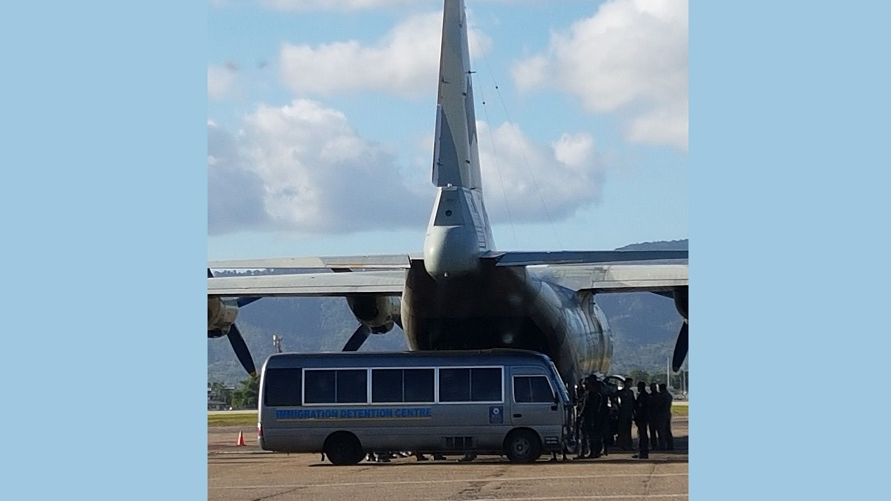 (Photo: A Venezuelan military plane was sent to airlift Venezuelans back to their home country on Saturday, April 21, 2018.)

The Ministry of National Security issued a statement on Saturday in which it revealed that 82 Venezuelan nationals were voluntarily repatriated to Venezuela with the assistance of the Ambassador of Venezuela to Trinidad and Tobago, Coromoto Godoy.

It explained that the Government at a recent meeting held at the Ministry of National Security with the Venezuelan Ambassador discussed arrangements to transport Venezuelan nationals who were being housed at the Immigration Detention Centre in Aripo back to their homeland.

“The United Nations is concerned for the welfare of these people and is in contact with the appropriate authorities in Port of Spain to ensure that any person in need of protection will get it without fail,” the United Nations Resident Coordinator said.

The United Nations claimed many of the persons repatriated were seeking asylum.

“The group, comprising 53 men and 29 women, included several individuals who had been registered as asylum seekers in Trinidad and Tobago as well as others who had initiated asylum requests or had signalled an intention to do so.”

It also questioned the Ministry’s statement that they were voluntarily repatriated.

“Venezuelans have been leaving their country in growing numbers, many in need of international protection and seeking temporary refuge in countries of the Americas region, including in some Caribbean small island states like Trinidad and Tobago.”

It added that United Nations along with its local partners have encouraged the prompt adoption of national legislation to support the government of Trinidad and Tobago in its efforts to develop an efficient and secure asylum system.

At a Joint Select Committee meeting earlier this month, it was revealed that more Venezuelans are entering T&T illegally, with 200 arriving by boat weekly.

It was also revealed that more Venezuelans have been seeking asylum in Trinidad and Tobago, with five people applying in 2016 to about 2000 today.

Edmund Dillon: We will send illegal Venezuelans back