Carlitha Andrews(center) with Leader of the Opposition, Mia Mottley standing in the background.

The deafening silence from the government on their next move for the residents still located in White Hill is the most aggravating part of the whole fiasco.

Since land slippage collapsed the Western access road to White Hill three years ago, residents are fearful of the Eastern road doing the same with each passing day and they are getting no information about the powers that be.

Pointing to cracks in the road and the edges of the road, which is falling away in some stretches, one resident, Sylvester Cumberbatch told Loop News that people can’t live at ease in White Hill, St. Andrew as it stands.

“People can’t walk freely. They are afraid of this road, this side of the road [to the East] breaking down as well and then we trapped in the center. They still fear this you know?” 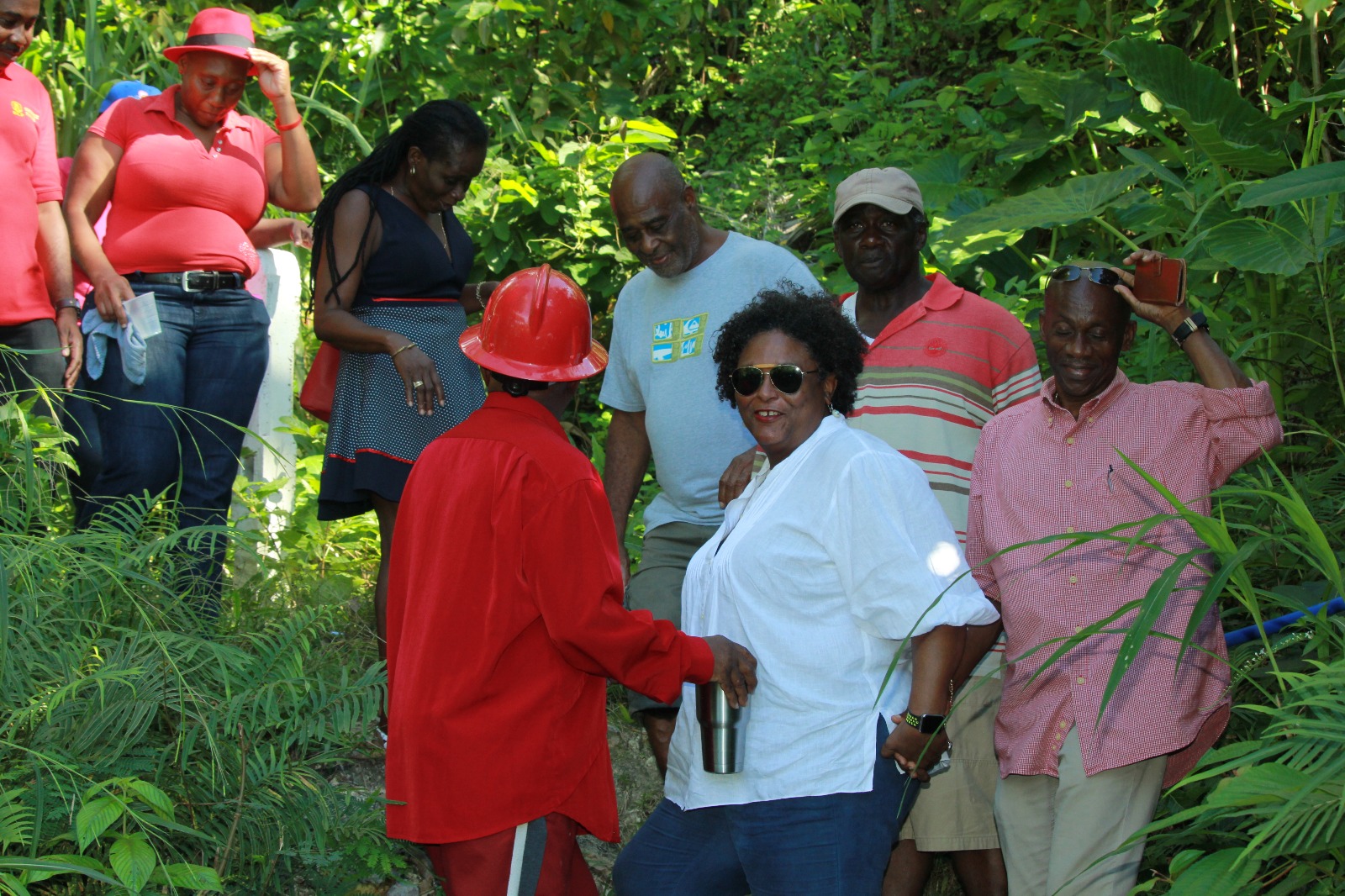 He said the government did a pale job of trying to make the breakaway passable.

Cumberbatch said that people make it seem as though they are awaiting handouts, but the community has been rallying together to make a way.

“It was a community effort even coming together and putting some marl in the road so people can walk because you were walking through there and there was a lot of mud in the road especially when the rain fall, and people sliding and stuff and the moss on the blocks had people sliding off the road.”

Noting that a pregnant resident fell making her way away across the breakaway, he said, “there are pregnant people, little children, and elderly, you have to watch over and look out for them. So it’s a big problem.”

Living in White Hill all his life, Cumberbatch said don’t be confused by the fact that he was speaking calmly and articulating himself well, “just thinking that nothing ain’t happening but seriously it’s a big issue. People are trying not to stress themselves with it, trying not to worry too much because worrying don’t help anything but it’s a very big issue.”

Asked if he thinks that persons should look to relocate themselves, he confessed that it’s a costly and prohibitive venture for most, so with that option not on the table, he said that they really want clarity and direction.

“On their own it’s a lot of money. Let we be reasonable, let we be real, to move a person from down in here by themselves – first, they got to source the land, number two, they gotta source some person to take down the house and move it. That is a lot of work. That takes time. They moved a couple people from down here, they could’ve moved the rest or at least come and tell yuh something and tell de people, notify yuh, no updates, nothing!”

Echoing some of his sentiment, another resident Carlitha Andrews stressed that the biggest concern is indeed the road “and no one to tell us what is going on, whether they are resiting or whether they are putting a road in place… Nobody talks to us. The only body as you can see is who we seeing now is the MP [George Payne], and nobody else. What we learn we learn from the media. So that is our biggest concern.”

Andrews said that using the more rural, Eastern road is impacting them financially too. She said if someone works late and has to take a taxi home now, via the Eastern route, “we have to pay more because the route is longer… It is dipping deep into our pockets.” And she confessed that some people have lost their jobs since the road collapsed as well.

Tired with the situation, she said, “I want it [General Elections] called because we want relief and the only way we gine get relief is if the right people are put into place.”

Loop chatted with residents when the MP George Payne and the Leader of the Opposition, Barbados Labour Party, Mia Mottley visited the community to mark the anniversary of the breakaway. They came the day after the three-year anniversary due to prior commitments but according to Andrews, they came on "the first day into the fourth anniversary" of the White Hill road collapse issue.

Fire officers fed up and frustrated