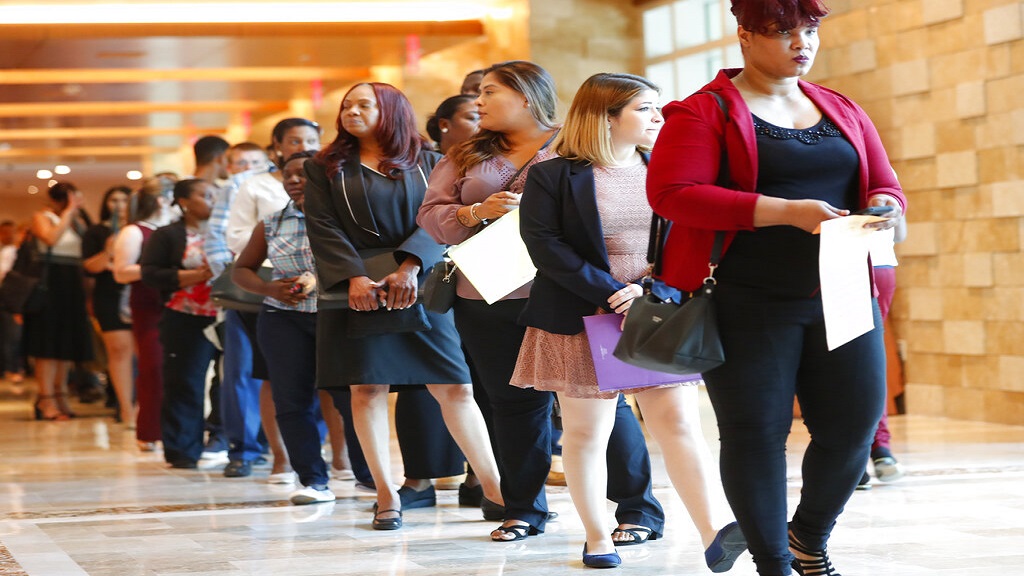 In addition to reporting the September gain, the government on Friday also revised up its estimate of job growth in July and August by a combined 45,000.

The US economy added a modest 136,000 jobs in September, a gain that managed to help lower the unemployment rate to a new five-decade low of 3.5 per cent but also suggested rising caution among employers.

The additional hiring and the drop in the jobless rate will likely ease worries that an economy weakened by the US -China trade war and by slower global growth might be edging toward a potential recession. In addition to reporting the September gain, the government on Friday also revised up its estimate of job growth in July and August by a combined 45,000.

Still, a drop-off in the pace of hiring compared with last year points to rising uncertainty among employers about the job market and the economy in the face of President Donald Trump's numerous trade conflicts. Pay growth has also weakened, reflecting the hesitance of employers to step up wages.

"The September jobs report sent some conflicting signals, but the big picture remains one of a labour market — and an economy — whose growth is downshifting but not collapsing," said Michael Feroli, an economist at JPMorgan Chase.

The comparatively sluggish hiring data makes it likely that the Federal Reserve will cut rates for the third time this year later this month to try to help sustain the expansion.

Excluding government, business hiring in the past three months has slowed to an average of 119,000 a month, the weakest showing in seven years.

And despite ultra-low unemployment, average hourly wages dipped by a penny, the Labor Department said. Hourly pay rose just 2.9 per cent from a year earlier, below the 3.4 per cent year-over-year gain at the start of the year.

Julia Pollak, a labor economist at jobs marketplace ZipRecruiter, said the pay that employers are advertising has declined this year after rising sharply in 2018. And she noted that the number of part-time workers who would prefer full-time work has risen over the past two months.

All those trends "show that employers are increasingly risk-averse as global uncertainty and recession fears rise," Pollak said.

The weakest sector of the economy — manufacturing, which is likely already in recession — cut 2,000 jobs in September. At the same time, retailers shed 11,400 jobs, and employment in mining and logging was unchanged.

The big gains last month were in health care, which added 41,400 jobs, and professional and business services, which includes higher-paying positions such as engineering and accounting. That sector added 34,000 positions.

Friday's jobs data underscored the benefits of a hot job market for lower-paid Americans and traditionally disadvantaged workers. The unemployment rate for workers without high school diplomas fell to 4.8 per cent, the lowest level on records dating to 1992. The rate for Latinos fell to 3.9 per cent, also a record low.

The employment figures carry more weight than usual because worries about the health of the economy are mounting. Manufacturers are struggling as businesses have cut spending on industrial machinery, computers and other factory goods. And overseas demand for US exports has fallen sharply as Trump's trade conflicts with China and Europe have triggered retaliatory tariffs.

A measure of factory activity fell in September to its lowest level in more than a decade. And new orders for manufactured items slipped last month, the government reported.

Persistent uncertainties about the economy are also affecting hotels, restaurants and other service industries. A trade group's measure of growth in the economy's vast services sector slowed sharply in September to its lowest point in three years, suggesting that the trade conflicts and rising uncertainty are weakening the bulk of the economy.

The job market is the economy's main bulwark. As long as hiring is solid enough to keep the unemployment rate from rising, most Americans will likely remain confident enough to spend, offsetting other drags and propelling the economy forward.

But a slump in hiring or a rise in the unemployment rate in coming months could discourage consumers from spending as freely as they otherwise might during the holiday shopping season.

Consumers are still mostly optimistic, and their spending has kept the economy afloat this year. But they may be growing more cautious. Consumer confidence dropped sharply in September, according to the Conference Board, a business research group, although it remains at a high level.

Americans also reined in their spending in August after several months of healthy gains. The 0.1 per cent increase in consumer spending that month was the weakest in six months.

Other parts of the U.S. economy are still holding up well. Home sales, for example, have rebounded as mortgage rates have fallen, helped in part by the Fed's two interest rate cuts this year. Sales of existing homes reached their highest level in nearly 18 months in August. And new home sales soared.

Americans are also buying cars at a still-healthy pace. Consumers would typically be reluctant to make such major purchases if they were fearful of a downturn.

Texas gunman was fired from job, called FBI before shooting

New jobs to be generated from Burger King relocation