US blames brutal attack on Afghan maternity hospital on IS 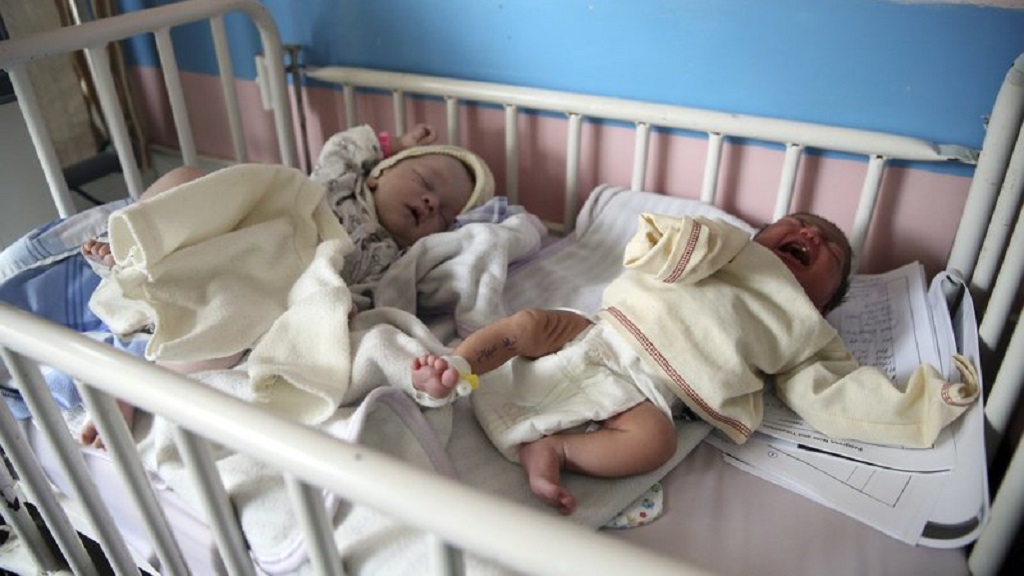 Newborn babies lie in their beds at the Ataturk Children's Hospital a day after they were rescued from a deadly attack on another maternity hospital, in Kabul, Afghanistan, Wednesday, May 13, 2020. (AP Photo/Rahmat Gul)

A US official said Friday the Islamic State (IS) affiliate in Afghanistan carried out this week's horrific attack on a maternity hospital in a majority Shiite Muslim neighbourhood in Kabul, killing 24 people including newborn babies and mothers.

Peace envoy Zalmay Khalilzad said the US government believes the Islamic State affiliate carried out Tuesday's attack on the hospital and an assault earlier the same day in a different province targeting the funeral of a pro-government warlord killing 34 people.

IS "has demonstrated a pattern for favouring these types of heinous attacks against civilians and is a threat to the Afghan people and to the world," Khalilzad tweeted.

IS has not claimed responsibility for the maternity hospital attack.

Also on Friday, Paris-based charity Doctors without Borders (Medecins Sans Frontieres), which operates the hospital, called the attack "pure hell." It said the gunmen moved directly to the maternity wards, ignoring other medical units closer to the entrance of the medical complex.

They were searching out the newborns and the mothers, the group said in a statement Friday.

"They went through the rooms in the maternity, shooting women in their beds. It was methodical. Walls sprayed with bullets, blood on the floors in the rooms, vehicles burnt out and windows shot through," said Frederic Bonnot, MSF's head of programs in Afghanistan. "They came to kill the mothers."

The IS affiliate in Afghanistan, known as Islamic State Khorazan Province, is headquartered in the country's east and has carried out several devastating attacks, mostly targeting the country's minority Shiite Muslims.

In 2018, IS killed dozens of young students taking university entrance exams in the same Dasht-e-Barchi neighbourhood of Kabul.

They have issued warnings to Shiites that they would kill them in their mosques, schools and homes.

The IS took responsibility for the attack on the funeral in eastern Nangarhar province.

The Taliban denied involvement in either attack, calling the maternity hospital assault a "vile, inhumane and an un-Islamic act."

In a statement Friday, the insurgent movement slammed Afghan President Ashraf Ghani for blaming the Taliban in a speech following the attacks.

They accused him of trying to scuttle a US-Taliban peace deal aimed at ending nearly 20 years of war.

Khalilzad, the architect of the deal signed February 29, warned in a series of tweets early Friday that the Islamic State affiliate opposes peace between the Taliban and Afghanistan's leadership in Kabul and "seeks to encourage sectarian war as in Iraq and Syria."

The peace deal provides for the withdrawal of US and NATO troops from Afghanistan but was also touted at its signing as the country's best chance at peace in four decades of war.

But relentless political turmoil in Kabul has dogged the start of the second, critical phase of the deal, which calls for Afghans on both sides of the conflict to negotiate a framework for a post-war Afghanistan.

Both Ghani and his rival in last September's presidential polls, Abdullah Abdullah, have declared themselves winners and have both been sworn in as president.

They have been unable to come up with a power-sharing deal even as Washington has said it will reduce $1 billion in aid if they don't end their squabbling.

Washington's efforts to get the Taliban to reduce their violence have also been unsuccessful, though their attacks have been against military installations and have not targeted US and NATO troops.

The withdrawal of US and NATO troops began after the deal was signed and will continue until all troops are gone by the end of next year — if the Taliban keep their promise to fight against militant groups, most notably the Islamic State.

MSF has suspended its operations in Dasht-e-Barchi, the charity told The Associated Press.

"This was a necessary but difficult decision knowing that women and children in Kabul are now deprived of a fundamental health care service they need, in a context where access to essential care is already limited," said Filipe Ribeiro, MSF's country representative.

The group said it will review its operations following an investigation into the attack.