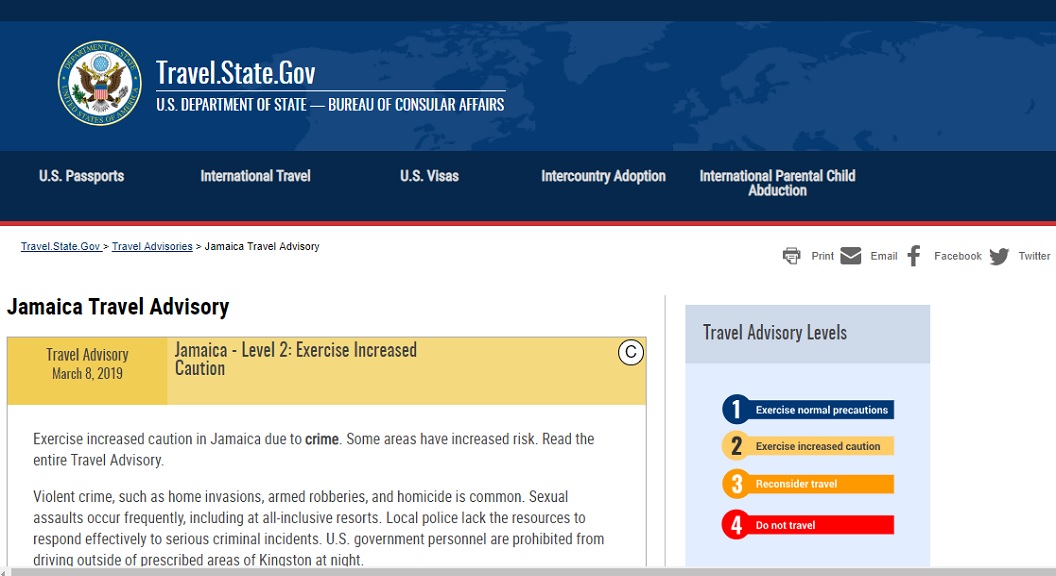 The United States (US) Department of State has issued a travel advisory for its citizens travelling to the Caribbean island.

In the advisory, the Department of State issued a level-two warning calling for visitors to "exercise increased caution" in Jamaica due to crime while adding that, "violent crime, such as home invasions, armed robberies, and homicide is common."

There are four travel advisory warning levels, ranging from "exercise normal precautions" to "do not travel."

The advisory, which was issued on Friday, claimed that "sexual assaults occur frequently, including at all-inclusive resorts."

Jamaica's tourism product was negatively highlighted in October of last year, when a national newspaper in America, USA Today, reported that the island's tourism sector was facing a 'historic' sexual assault problem.

USA Today published that 12 Americans were allegedly raped in Jamaica in 2017, with half of them inside gated resorts by hotel employees.

That USA report followed an incident in September last year, where two female tourists were allegedly raped by an entertainment coordinator at a popular resort in St James.

The Detroit Free Press, another American news media, released an investigation about two US females, who were raped by three employees at a popular hotel resort Jamaica's north coast.

In response to the sexual assault allegations within the tourism sector, tourism minister Edmund Bartlett had ordered an intensive security audit of the sector, including hotels and attractions island-wide. The second phase of the security audit being undertaken by the Tourism Product Development Company Limited (TPDCo), is to be completed in June of this year.

Meanwhile, Friday's travel advisory for Jamaica has warned US citizens not to visit certain neighbourhoods of Kingston and Montego Bay, because "violence and shootings occur regularly" in those areas.

It also noted that US government personnel are barred from driving outside of certain neighbourhoods of Kingston at night.

Kingston, because of violence:

According to the Travel Advisory, "violence and shootings occur regularly in some areas of Montego Bay. Do not travel to the following areas: Canterbury, Clavers Street, Flankers, Hart Street, Norwood (and) Rose Heights."

The advisory said Spanish Town in its entirety should not be visited.

"Local police lack the resources to respond effectively to serious criminal incidents," the US Department of State noted it’s advisory.

However, the US government told it, citizens, that if they decided to travel to Jamaica they should:

"Avoid walking or driving at night, avoid public buses, avoid secluded places or situations, including in resorts, do not physically resist any robbery attempt, be aware of your surroundings and keep a low profile," the advisory stated.

"Enrol in the Smart Traveler Enrollment Program (STEP) to receive Alerts and make it easier to locate you in an emergency, follow the Department of State on Facebook and Twitter and eview the Crime and Safety Report for Jamaica."

Meanwhile, the US State Department has level-two travel advisories in 57 countries, including popular travel destinations such as France, Germany, Spain, and the Netherlands, according to US media reports.

Those advisories mostly stem from an uptick in terrorism concerns in Western Europe.

Antarctica also has a level-two travel advisory because of "environmental hazards posed by extreme and unpredictable weather."

Fourteen level-three advisories are presently issued. There are 12 level-four advisories, including cautions against all travel to Haiti because of "crime and civil unrest."

Those who visit that country are advised by the State Department to ensure they are not being followed upon leaving the airport and to secure medical evacuation insurance before visiting.

Massive search on for Jamaican woman missing in the US

Majority of returning residents’ murders being cleared up – DCP Hay

Domestic disputes behind most murders of returning residents - Chang