With US leaving, rival powers seek to move into Syria's east 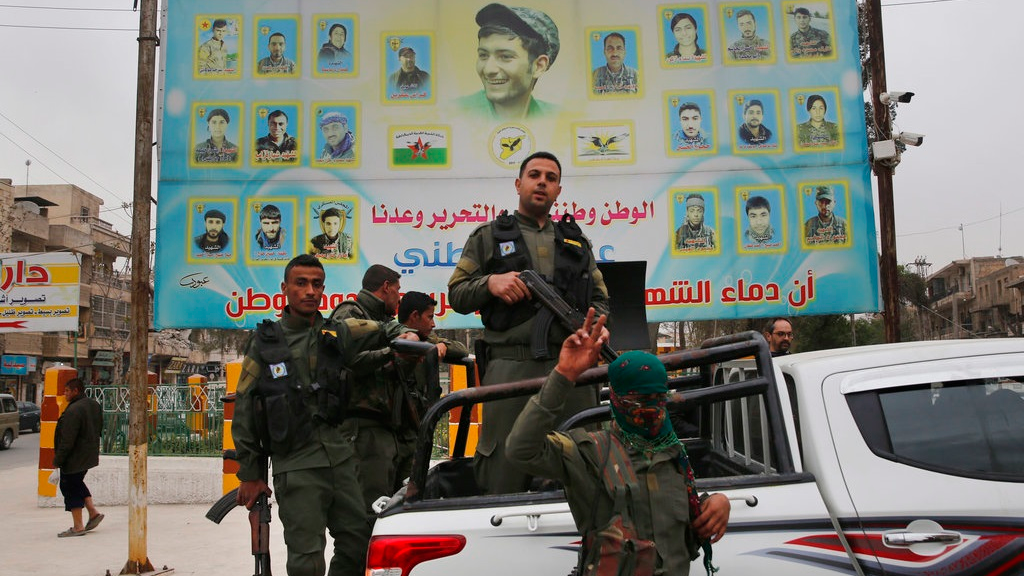 In this photo taken on Wednesday, March 28, 2018, members of the Kurdish internal security forces stand on their vehicle in front of a giant poster showing portraits of fighters killed fighting against the Islamic State group, in Manbij, north Syria. The planned U.S. troop withdrawal opens a void in the north and east of Syria, and the conflicts and rivalries among all the powers in the Middle East are converging to fill it. (AP Photo/Hussein Malla, File)

The planned U.S. troop withdrawal opens up a void in the north and east of Syria, and the conflicts and rivalries among all the powers in the Middle East are converging to fill it.

The sudden American decision to pull out its 2,000 troops has forced a reassessment of old alliances and partnerships. The Syrian government, the Kurds, Russia, Iran, Israel and Turkey have all had a hand in the country's nearly eight-year war — each in a way, fighting its own war for its own reasons within Syria. Now all of those conflicts play out in the territory being abandoned by the Americans, creating new tensions, potential chaos and bloodshed.

To reassure jittery allies, Washington sent national security adviser John Bolton to Israel on Sunday, to be followed by Secretary of State Mike Pompeo who is planning an eight-country tour of Arab allies this coming week.

Here is a look at what's at stake.

The area up for grabs is around a third of Syria, forming a rough triangle. To the north is the border with Turkey, to the east the border with Iraq, and the third side is the Euphrates River. This was the heart of the Islamic State group's foothold in Syria until the United States partnered with a Kurdish militia, creating a force of some 60,000 fighters —including some Syrian Arabs and Christian Assyrians — that wrested it away from the militants.

The territory is strategically important. For the Syrian government of President Bashar Assad and its allies Russia and Iran, regaining it means re-establishing sovereignty. The territory was once the source of Syria's wheat and barley, its dams generated electricity and it holds some of Syria's richest oil resources. Without it, Assad will have a harder time with reconstruction and operating long term. For the same reasons, it's been a source of income for the Kurdish militia.

For the Kurds, their hold gave weight to their long-sought goal of autonomy. For the U.S., the troop presence ensured American influence. Turkey sees Kurdish autonomy on its border as an existential threat and has vowed to prevent this, accusing the U.S. of empowering the militia Ankara says is linked to Kurdish insurgents in Turkey.

Without the Americans, the door opens for Assad and his Russian backers to move in.

"The only obstacle preventing Assad from gaining control of the east was the U.S. presence and the cover that it provided to the (Kurdish militia). With that gone ... there is simply no real challenge that would prevent the regime from re-establishing control over those areas," said Ayham Kamel, of the Eurasia group.

Abandoned by the U.S., the Kurdish fighters are forced to move toward Russia and Assad for protection against their more feared enemy, Turkey. Their force, armed and equipped by the U.S.-led coalition, is unlikely to disappear. Instead, it is seeking an arrangement with Assad to continue operating as the government extends control over the territory.

Syrian officials boast that the withdrawal is a defeat to America. Controlling the east would help seal Assad's victory in the civil war. The American move also accelerates a trend by Arab states to normalize relations with Assad, whom they shunned for years. The United Arab Emirates, a close U.S. and Saudi ally, recently reopened its embassy in Damascus.

TURKEY vs. KURDS, RUSSIA and ASSAD

Turkey's military, along with some 15,000 allied Syrian rebel fighters, is poised to launch an offensive in the east to break Kurdish control over the border.

But an offensive risks creating friction with Russia. In particular, it could wreck a cease-fire agreement the two reached over Idlib, the northwestern province held by rebels and Islamic militants where Turkey has influence — enabling a Syrian government assault on the province. Russian and Turkish officials have been holding talks, trying to avert tensions.

"A massive Turkish operation is not in Russia's interest. It destabilizes the situation, risks undermining Idlib agreements and talks on reconstruction. Plus, if Turkey decides to capture all of the Kurdish areas it will inevitably clash with Russia and Iran," said Yury Barmin, a Russia analyst.

Turkey is equally concerned over the prospect of Syrian government control over the east. In the past, Damascus has used the Kurdish militia as leverage against Ankara and could do so again. For nearly 20 years, Syria hosted the main Kurdish leader until he was captured in 1998, now imprisoned in Turkey.

A Syrian government move east means the spread of Iran as well. It will dramatically widen the land corridor where Iran enjoys free rein for its allied fighters, weapons and supplies across Iraq and Syria to Lebanon. Already, Iranian-backed militias have expanded control over areas near Syria's border with Iraq and freely cross back and forth.

That has alarmed Israel. The likely result will be increased Israeli airstrikes against suspected Iranian-linked targets in Syria.

THE U.S., TURKEY and the ISLAMIC STATE GROUP

President Donald Trump dismissed the idea that the U.S. needs influence in the conflict, saying Syria was nothing but "sand and death." He claims the U.S. mission there — to fight IS — has largely been completed. But IS still holds pockets and U.S.-led coalition officials warn it could surge again.

There has also been growing unrest among Arab tribes in the east, disgruntled by the Kurdish-led administration. They too are likely to be a source of tension and may be leveraged by the different players for their own advantages.

Turkish President Recep Tayyip Erdogan told Trump his forces could take over fighting IS. In two previous offensives, Turkish forces and their Syrian allies retook territory in the northwest from IS and Kurdish fighters. But their track record of abuses, forced displacement of Kurds and lawlessness raises concern over whether they can exercise authority in the east.

"The force that Erdogan has to offer Trump to replace the (Kurdish militia) in eastern Syria is not large enough, locally legitimate enough, and quite frankly not vettable enough, for the standards of the U.S. military," said Nick Heras, a Syria expert with the Center for a New American Security.

Abducted by their father, Trini brothers now trapped in Syria

Blast in northern Syria kills at least 36; cause unclear