Skip to main content
Breaking News |
Sister files missing report for brother who has dementia
Coronavirus cases in the Caribbean as of October 1 at 10am: 201,204
Revenue Authority tests staff after possible COVID-19 exposure
All schools closed today due to weather system
Flood warning in effect for Barbados as tropical wave approaches
Another COVID-19 patient recovers in Barbados
VIDEO: 5 Reasons why children are protesting their CSEC, CAPE grades
Coronavirus cases in the Caribbean as of September 30 at 10am: 198,807
American Airlines to do pre-flight tests for travellers to Caribbean
Fallen tree does not stop school at The St Michael School 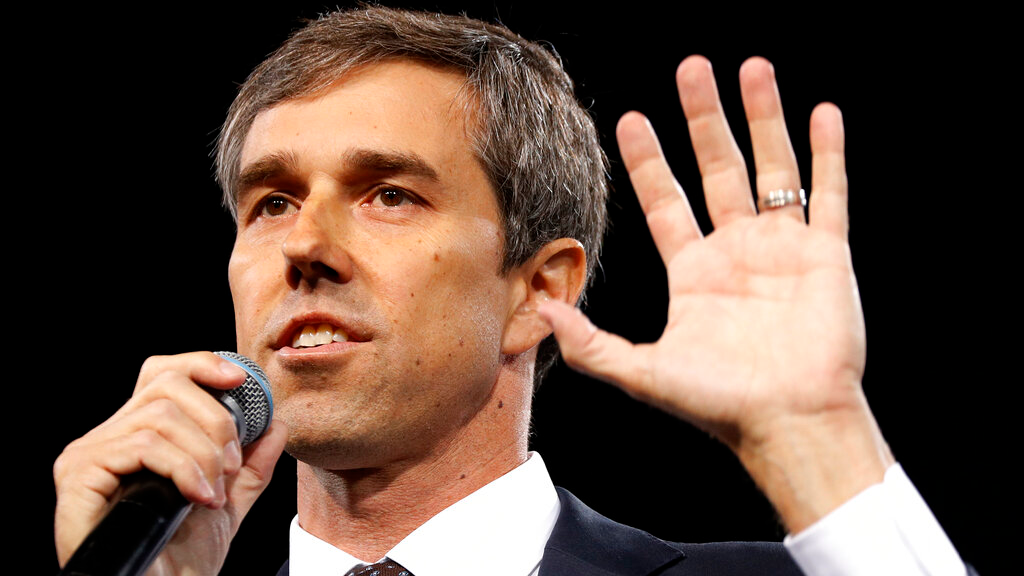 In this April 27, 2019, photo, Democratic presidential candidate and former Texas congressman Beto O'Rourke speaks at a Service Employees International Union forum on labor issues in Las Vegas. O’Rourke has unveiled a sweeping immigration plan to seek a pathway to U.S. citizenship for 11 million people in the country illegally, deploy immigration lawyers to the southern border and earmark $5 billion to bolster the rule of law in Central America. (AP Photo/John Locher)

US Democratic presidential candidate Beto O'Rourke on Wednesday unveiled a sweeping immigration plan to seek a pathway to U.S. citizenship for 11 million people in the country illegally, deploy thousands of immigration lawyers to the southern border to help with asylum cases and earmark $5 billion to bolster the rule of law in Central America.

The former Texas congressman becomes just the second major candidate in the packed field of Democratic presidential hopefuls to offer a comprehensive immigration proposal, even though the U.S.-Mexico border and the thousands of people streaming across it illegally have dominated headlines and U.S. policy discussions for months.

Other policy goals — including plans to slash carbon emissions nationwide to combat climate change and extend universal health care coverage — have overshadowed immigration, despite President Donald Trump fixating on calls for tightening border security and extending a wall along the border, seeing both as winning issues for himself and the Republican Party heading into 2020.

The only other Democratic White House contender to offer a full immigration plan is former Obama administration housing chief Julián Castro, who called in April for ending criminalization of illegal border crossings entirely.

O'Rourke's plan doesn't go that far, but he pledges to use executive orders to mandate that only people with criminal records be detained for crossing the border illegally. He also would end the separation of immigrant families at the border, remove federal immigration courts from their current jurisdiction under the Justice Department, stop all funding for what he calls "private, for-profit prison operators" and send 2,000 lawyers to the border to help those immigrants seeking U.S. asylum, often because they are fleeing drug or gang violence back home in Central America.

O'Rourke said he'd work with Congress to legalize 11 million people in the country illegally during his first 100 days as president, fast-tracking "Dreamers," those people brought to the U.S. illegally as children. And he's promising to invest $5 billion to combat violence and poverty in the three Central American countries that currently send the most immigrants to the U.S. illegally: Guatemala, El Salvador and Honduras.

The plan "overcomes a generation of inaction to finally rewrite our immigration laws in our own image reflecting our values, the reality of the border, the best interests of our communities, and the longstanding traditions of a country comprised of families from the world over," O'Rourke said in a statement.

O'Rourke, a fluent Spanish speaker, served three terms in Congress representing El Paso, across the Rio Grande from Ciudad Juárez, Mexico. While campaigning, he reminds audiences multiple times a day that immigrants comprised more than a quarter of the people in his district and declares that his hometown and Juárez are part of the world's largest "binational community." He's fond of saying that El Paso is among the safest cities per capita in the nation "not because of walls but in spite of walls" along the border.

O'Rourke's plan also seeks to better track and prevent immigrant deaths by creating an independent border oversight office and expanded training and contact with surrounding communities for federal personnel. A nine-page fact sheet O'Rourke released with his proposal accuses the Trump administration of "pursuing cruel and cynical policies that aim to sow needless chaos and confusion at our borders."

"It is manufacturing crises in our communities. And it is seeking to turn us against each other," the fact sheet says. "When this is done in our name, with our tax dollars, and to our neighbours, we not only undermine our laws, hold back our economy, and damage our security — we risk losing ourselves."

Trump has said his immigration policies are meant to keep the country safe.