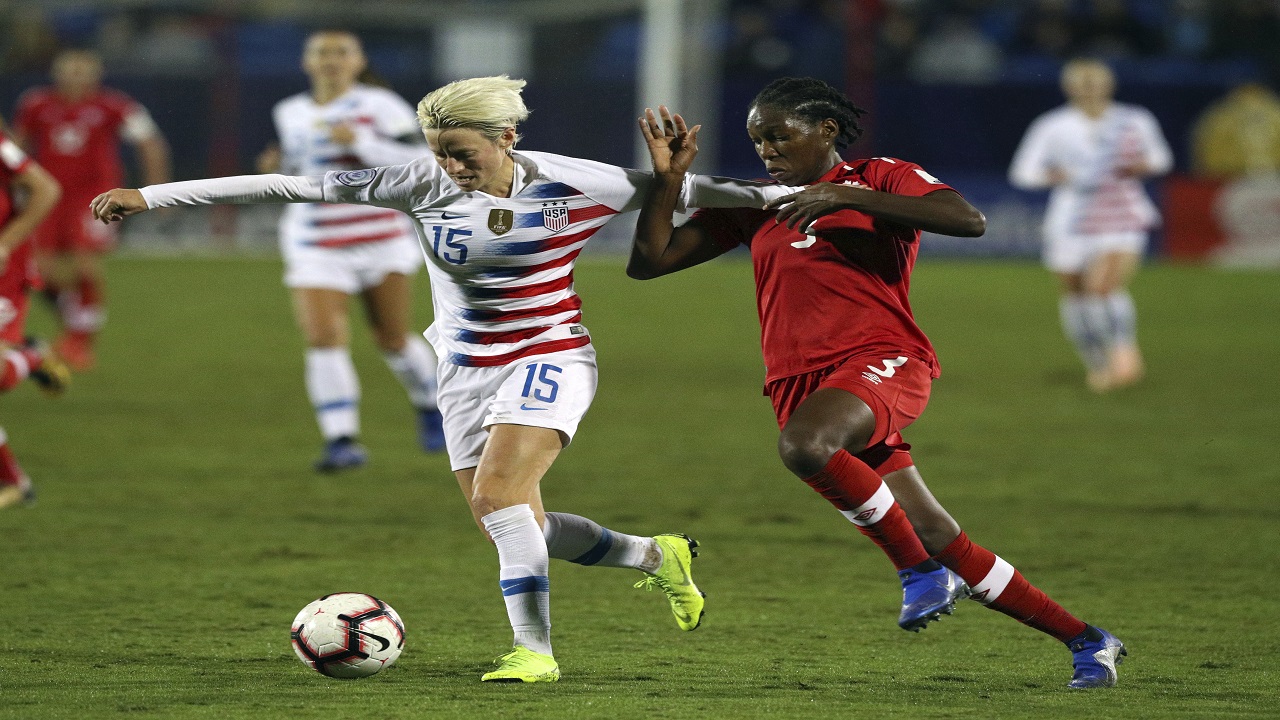 USA forward Megan Rapinoe (15) and Canada Kadeisha Buchanan battle for the ball in the first half of the finals of the concacaf Women's football Championship on Wednesday, Oct. 17, 2018, in Frisco, Texas.

Rose Lavelle is still trying to regain some of the confidence that was shaken when she was injured.

Lavelle has been back to full strength for a while since battling a nagging hamstring injury, but it's the mental part that she's been working hard to overcome.

On Wednesday night she scored within the first two minutes and the U.S. women beat rival Canada 2-0 in the championship match of the concacaf World Cup qualifying tournament.

"It's a little weird because it's been a while since I've been back, I've been back for a couple of months now. I really didn't think it would take that long," said Lavelle, who at 23 is one of the team's young stars. "I think when I'm playing my best I'm not thinking, and things are coming naturally. I'm not quite there yet. I think I'm getting there, and I know I'll get there, but I'm not there yet."

Both had already secured spots in next year's World Cup in France with victories in the semifinals. Concacaf sends the top three finishers in the tournament to the World Cup.

Jamaica earned a trip to France on penalties after a 2-2 draw with Panama in the third-place match at Toyoda Stadium earlier on Wednesday. Panama will still have a chance to qualify for France with a two-legged playoff against Argentina next month.

It will be Jamaica's first trip to the World Cup, and the island nation is the first team from the Caribbean to earn a spot.

The United States, the top-ranked team in the world, are the defending World Cup champion. The Americans beat Japan in the 2015 World Cup final in Canada.

Lavelle's left-footed goal from distance came less than two minutes into the match. It was the sixth of her career, and third of the tournament.

Lavelle, who played at Wisconsin, was the first pick of the National Women's Soccer League draft in 2017. She currently plays for the Washington Spirit. She's made 18 total appearances for the national team.

The game between the two rivals was tense from the start, and Tobin Heath was handed a yellow card after exchanging words and pushes with Canadian defender Allysha Chapman.

Morgan collided with Canadian goalkeeper Stephanie Labbe on a good U.S. chance in the 61st minute. Morgan recovered to take a shot that was diverted away by Shelina Zadorsky.

Morgan was just wide on another effort in the 80th minute, but finally broke through with her goal in the 89th. She has 24 goals in her last 24 games.

Morgan was the top scorer of the tournament with seven total goals. The United States did not concede a goal in the five matches.

"Canada made it hard for us at times tonight," Morgan said. "I just think part of this, when you play your rivals in a tournament like this, it's sometimes very much about heart, and will. So I think to get the late goal was incredible rewarding for the mentality piece. It's something you can take away and lean on later."

The match was played in steady rain and temperatures in the 50s. Attendance was announced a 6,986.

Canada, ranked fifth in the world, have seen their profile raised in recent years with back-to-back bronze medals at the Olympics. The two teams met in an epic semifinal match at the 2012 London Games, with the United States coming out on top 4-3 in overtime.

The two teams most recently met last year. They played to a 1-1 draw in Vancouver before a 3-1 U.S. win in San Jose, California, on the return leg. Overall, Canada and the United States have met 58 times, with the United States holding a 48-3-7 advantage.

Both teams dominated group play, and went into the final with 24 goals apiece, for an average of six goals per game. The teams also had the tournament's top scorers: Canada's Adriana Leon and Morgan each had six goals.

It was the first time Canada coach Kenneth Heiner-Moller faced the United States in his new job. He took over the women's national team in January after coach John Herdman moved to the men's side.

"It was a final and you could see it," Heiner Moller said. "I think we left everything we could out there."

They did it! Reggae Girlz book ticket to World Cup