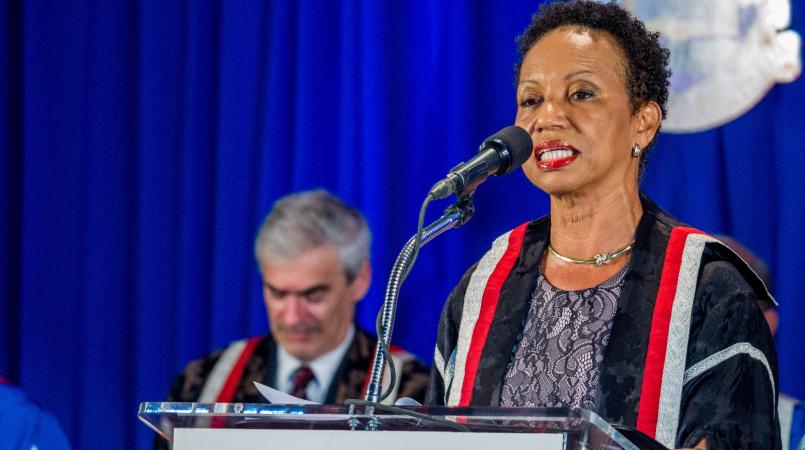 The Pro Vice-Chancellor and Principal of The University of the West Indies, Cave Hill Campus will now be referred to as Professor the Most Hon. Violet Eudine Barriteau.

Grenadian by birth, a mother of one - Cabral Fanon Barriteau Foster, she is a Caribbean feminist, scholar and activist with considerable experience in executive administration and coordination of regional projects and extensive research interests that encompass transformational educational leadership, feminist theorizing and investigations of the Caribbean political economy, and gender and public policy.

In the 2019 Independence National awards, the newest award was conferred upon her.

The accolade of the Order of Freedom of Barbados was presented to her outstanding contribution to tertiary education and pioneering leadership in the development of gender studies and the promotion of gender equality.

Barriteau migrated from Grenada as a child in 1966, attended St. Matthias Girls’ School, Ellerslie Secondary and gained a BSc honours degree from The University of the West Indies, Cave Hill Campus in 1980.  Professor Barriteau holds an MPA in Public Sector Financial Management from New York University, 1984, and a PhD in Political Science from Howard University, 1994.  She has published thirty-seven book chapters and peer-reviewed journal articles, including her first book, The Political Economy of Gender in the Twentieth Century Caribbean (Palgrave, 2001).

Her first job was as a Teacher at St. George Secondary, 1972-1978, a post she describes as her best work experience from the tremendous satisfaction she gained teaching there.

She has been awarded several academic scholarships and awards from universities and organizations.  She was a Latin American Scholarship Program of American Universities LASPAU/Fellowship scholar at New York University 1982-1984, and the first Caribbean woman awarded the Margaret McNamara Memorial Fund Scholarship in 1991.  She was an American Association of University Women scholar, 1992, and was awarded a Howard University Doctoral Fellowship, 1992.  In 1997, she was the Inaugural Fellow of the Dame Nita Barrow Distinguished Women in Development Visitor Programme at the University of Toronto.  She was an inaugural International Research Fellow at the Centre for Excellence in Gender Research, GEXCEL, Orebro, Sweden, April 2008, and was invited to return in November 2010 and March 2013.  In 2018, on its 70th Anniversary, The University of the West Indies recognized Professor Barriteau for Outstanding Academic Achievement and Leadership, as one of 70 outstanding Cave Hill alumni.

Professor Barriteau has received a number of national, regional and international awards and recognitions.  She was President of the International Association for Feminist Economics (IAFFE) 2009/2010.  In July 2011, she was bestowed the Tenth CARICOM Triennial Award for Women at the Thirty-Second Regular Meeting of CARICOM Heads of Government, St. Kitts.  In 2013, during Barbados’ 47th Anniversary Independence celebrations, she was awarded the Gold Crown of Merit, the country’s third highest honour in recognition of her invaluable contribution to gender and development.  In 2015, Professor Barriteau chaired the CARICOM Prime Ministerial 5-member panel appointed to review the Governance of West Indian Cricket.  In February 2016, she was bestowed The Order of Grenada Gold Award for Excellence for 2015, at Grenada’s 42nd Independence Anniversary celebrations.

Professor Barriteau has spearheaded a number of initiatives at the UWI.  In 2016, she recommended creating a Faculty of Sport, which The University of the West Indies established in July 2017, the first new Faculty to be introduced in 47 years.

Professor Barriteau successfully gained recognition for the Cave Hill Campus in meeting comparability of standards for the Faculty of Medical Sciences, Cave Hill from the National Committee on Foreign Medical Education and Accreditation (NCFMEA), October 2016.  In 2017, Professor Barriteau launched The Smart Campus Initiative, designed to reconceptualise the delivery of higher education goods and services in Barbados and the Caribbean by the harnessing ICT technology to support national and regional development.  In October 2019, The UWI approved the proposal developed by Professor Barriteau for the establishment of a Faculty of Culture, Creative and Performing Arts which takes effect on Emancipation Day, August 1, 2020.

Congratulations to Prof. the Most Hon V. Eudine Barriteau!