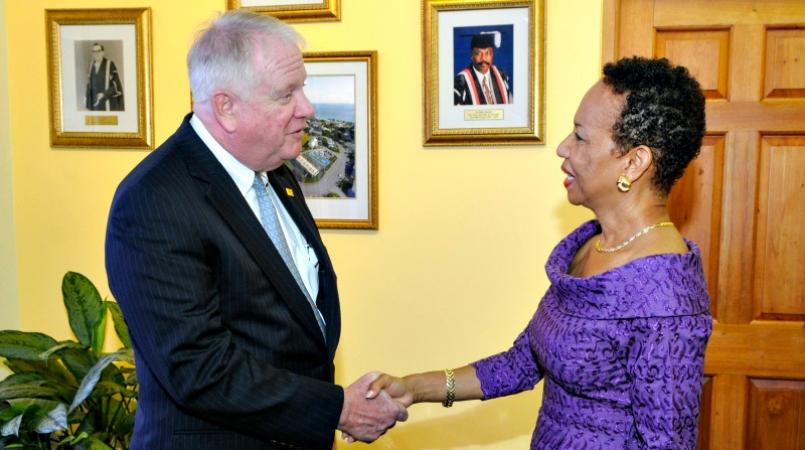 The University of the West Indies, Cave Hill Campus is expected to take a multi-million dollar step to help the Caribbean further develop through science and technology.

The effort will see the establishment of a state-of-the art Faculty of Science and Technology at the campus.

She also said that the campus was aiming to increase its student population to close to its carry capacity of 9,000 by tapping in on non-traditional Caribbean markets as well as international markets.

She said that the campus’ enrolment had declined after the Barbados Government introduced tuition fees for local students, however, she was seeking to market the campus internationally by leveraging its reputation for offering a quality education as well as its location in Barbados highlighted by factors such as good international connections by air, access to digital technology and good social cohesion.

Prior to meeting with the principal, the CEO toured the campus and said he was impressed with the facilities. Professor Barriteau noted that her predecessor, Professor Sir Hilary Beckles, now The UWI’s Vice Chancellor, had worked diligently to modernise it but the Faculty of Science and Technology, originally built in the 1960s, was out of pace with today’s requirements and was the next area for attention.

Barriteau noted that growth in science and technology was integral to the region’s development; therefore it was necessary for faculty and the student population to have access to better facilities. In addition, she said having a modern faculty was important to the long-term transformation of learning, delivery and investment at the campus. She added that the Caribbean Development Bank was carrying out preliminary work that will facilitate design and other fundamentals of the project.

The CIBC FirstCaribbean CEO said the bank was interested in learning more about the project and was willing to help, especially recognising its link to the region’s development.

CIBC FirstCaribbean is a long-time supporter of the university. The parties formalised their relationship in 2003 with the signing of their first three-year memorandum of understanding (MOU). During the courtesy call, Mr. Brown presented Professor Barriteau with the final tranche of sponsorship money under the 2014-2017 MOU.

Noting that the bank was pleased to partner with the university as it developed the human resources of the region, Brown announced that its community relation’s arm, the FirstCaribbean ComTrust Foundation, had given the go-ahead to commence negotiations with The UWI for a new MOU.

The MOU usually targets scholarships for students, research funding as well as the campus’ outreach to the general public through the annual Frank Worrell Memorial Cricket Lecture and the annual International Women’s Day lecture.

Professor Barriteau, who is in her second year as principal, thanked the bank for continuing its relationship with the university, adding that she would ensure the campus carry some visible sign of the bank’s tangible contribution.