UWI lecturer ready to deal with consequences of Gonsalves protest 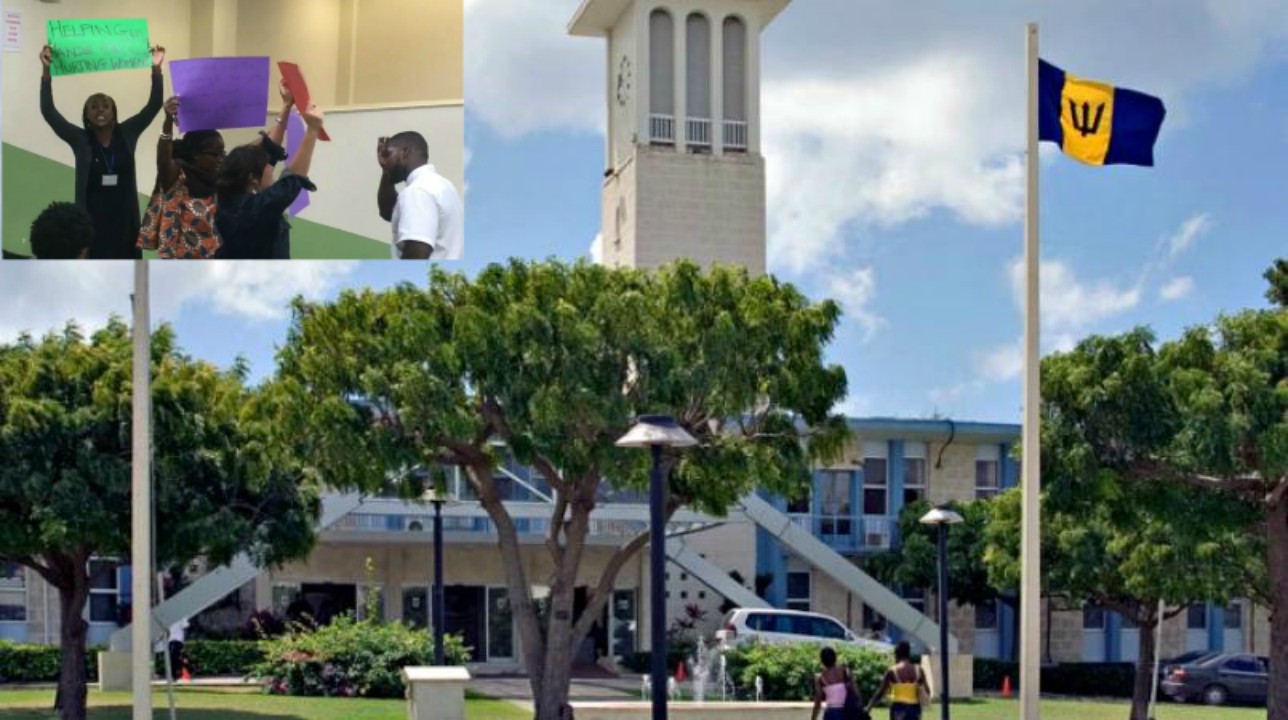 (Inset) Hinds, bearing green placard, demonstrating during a lecture at the University of the West Indies.

Organizer of last night's protest and UWI lecturer, Kristina Hinds, said she is willing to accept any sanctions from her employer for the demonstration staged during the address given by the Prime Minister of St. Vincent and the Grenadines, Ralph Gonsalves.

Hinds is a lecturer at the University of the West Indies (UWI), Cave Hill in Political Science and International Relations where she has taught since 2006. On Thursday night she and two other Barbadian women staged a small protest during Gonsalves lecture, calling for an end to gender injustice and the misuse of political power.

In an interview with Loop News, Hinds said she hopes the management of the campus understands the motive behind the demonstration and thus, there is no severe backlash meted out to her.

"Yes it [protest] is at my place of employment and I enjoy my job ... I believe in what the University stands for. Although it was a little bit risky... being at University means that you ask critical questions. If this is something that will cause me to be sanctioned, I will just have to deal with the consequences of my actions."

Hinds said she was only made aware of the lecture, organized by UWISTAT, on Wednesday and she immediately began reaching out to local women's rights groups seeking support. Hinds was able to secure two additional protesters, Marsha Hinds of the National Organization of Women (NOW) and Luci Hammans, Co-Director of the Life of Leggings Movement.

She explained the demonstration was as a result of outstanding issues surrounding the Gonsalves administration such as alleged misuse of political power as well as allegations of misconduct which have been coming to light over the years and as recently as last month with a young Vincentian woman, Yugge Farrell. Hinds made it clear that silence was not an option when it came to allegations of abuse of women.

"For me this is not just about an isolated incident. It is about the way that some things can happen to women or allegations can be made... and they do not seem to be any consequences or any serious treatment of these issues.
"In other parts of the world these are things that would have to be addressed if you are going to continue to sit in Parliament and hold political office."

Hinds said the level of force used to remove the group off the campus was worrying considering they were not armed and had not threatened Gonsalves or anyone attending the lecture. In addition to the campus security, five officers of the Royal Barbados Police Force (RBPF) were called to quiet the protesters, including two from the Task Force who were armed with rifles. She said they made a decision to leave the campus rather than be arrested.