Valentine's 2020 is more colourful than ever, beyond red and white 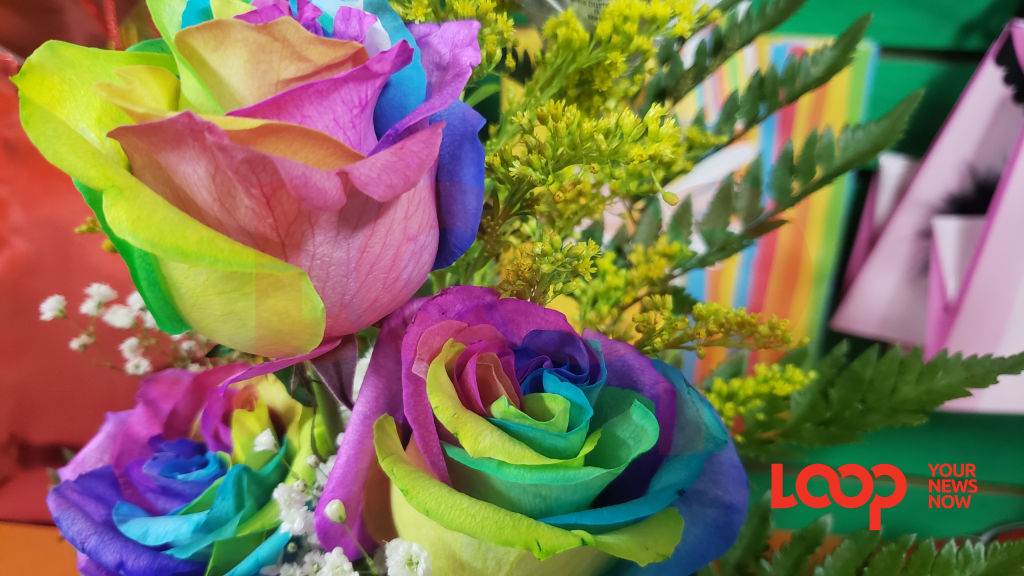 One local floral business threw caution to the wind and is seeing great success as a result of their bold, non-traditional move.

In the florist's world, it may seem easy to get stuck in a rut with the same slew of flowers, but not at Nikko's Creations Flower shop.

Loop dropped by the Wildey-located store and was pleasantly surprised that Valentine's 2020 came with a colourful difference - Rainbow roses!

Working at the shop for just three years, one staff member said that she has been trying for years to get her employer to step out of the red and white for Valentine's Day box, and this year she finally convinced her. Giving the idea a chance, owner Susie Arthur can't be anything but happy because the rainbow roses have been a hit.

Tomorrow, Friday, February 14, 2020, Nikko's will be making deliveries to over 100 persons, and though many are surprises from secret admirers or loved ones trying to be anonymous, the true shocker was that quite a few recipients are also male. It seems that women have stepped up and have ordered goodies for their significant others as well this toss.

That's not to say this trend is new, but it has increased this year, according to the Sales Rep.

However, speaking specifically to the response by persons to the rainbow roses, as the buzz surrounding them is what got us in the store in the first place, staff said: "The response has been wonderful because it's unique."

Many persons came in to place orders for red roses and then the rainbow colours caught their eyes. We heard, "Are those fake?" "That is a paper rose?" "How much fuh de pretty ones there?" Not fazed by the reactions, all week-long staff have been educating persons. "The roses are real. The have been dyed that way." This then evokes a chorus of "Ohhhhh" "You serious?" "Leh me touch it!" And then quite a few customers have actually opted to change their original orders in favour of the newest item on the cards.

Nikko's tried to work with customers considering the economic times as well. The staff member who made the executive decision to push and push until her boss said 'yes' to the rainbow variety, said they have been making personalised combos for people and trying to offer gift ideas to match people's pockets, purses and wallets. She said they even did a rainbow rose vase piece with balloon and all the dressing for around $130.

Asked what is the biggest seller after the rainbow rose, staff said, "Single roses. Roses are ruling at the moment."

So we asked why if the regular varieties of roses sell, why was she so adamant that they step out on a limb with this rainbow option. She said, "Nikko's has been around for over 10 years. I have been here for over three years. I work with flowers but I'm not a florist. But I just wanted to do something different, apart from the red and white and it's pretty.

"Valentines should be something a little different. You can get or give red roses all year, but now this year we have done it, added the rainbow rose just for Valentine's only, and looking at the sales, it's speaking for itself!"

With a full-service website, delivery to all 11 parishes and "cupid elves" busy at work in the Flower shop, it seems many people's Valentine's Day for 2020 may be made special because of Nikko's

Loop asked some customers about their plans, and one husband, who's been married for a year and half said that he came back because he gets "excellent service." He said he used the service before his marriage, and now this is the first time since he said his 'I do' that he would be using them for Valentine's Day "in this form". He is surprising his wife with a personalised combo, so he chose to remain anonymous.

Another gentleman was placing two orders, and Loop playfully asked, "Who are the lucky ladies?' But he quickly clarified that one of his friends had ordered for his girlfriend so he's paying in his money, while placing his own order for his girlfriend. "Nah nah nah not two women, one woman," he stressed. Saying that the staff "was good and friendly", he said that this is his first doing "anything like dis fuh Valentine's". So we asked, "Why this time?" Thinking hard and nearly blushing, he said, "I don't know. I ain't know how to say it. We been together a year and a half. Man she, she, yuh know. She makes me happy. She gets me."

In Bridgetown, there was a lot of the traditional red and white and for many "sales are limited" so far. But the retailers in The City were expecting sales to pick up today, tomorrow and over the weekend. "Lots of people happy Valentine's fall a Friday this year, so they will go dinner this weekend and take the gifts as surprises," is what one vendor shared. So she was not daunted by the slow response up to Thursday, February 13.

8 kinds of love to celebrate on Valentine's Day

10 soca songs to fuel your Valentine's