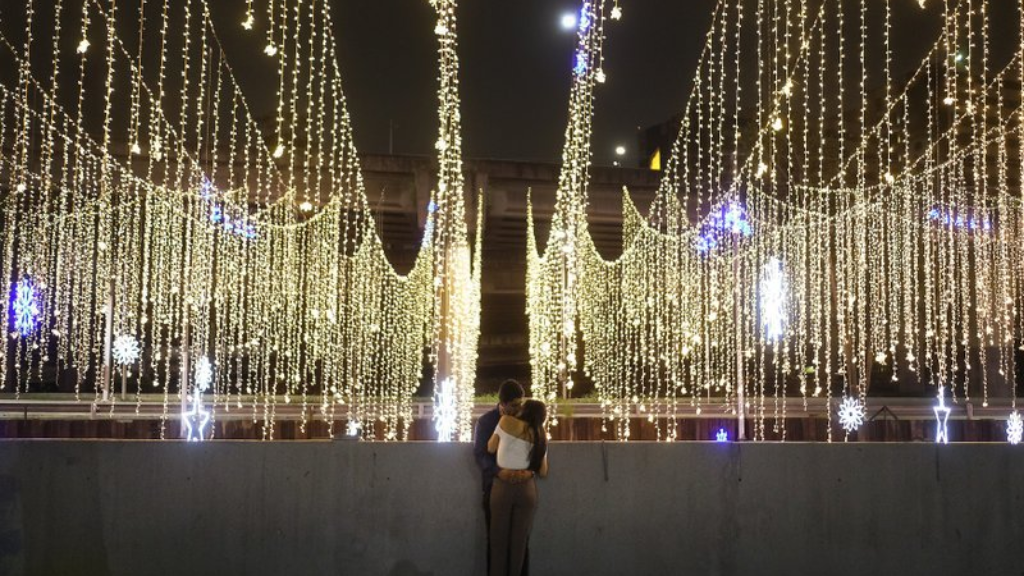 After a tumultuous year in Venezuela with unprecedented blackouts, the country's government has put up brilliant displays of Christmas lights, trying to spread a little holiday cheer.

Cars filled with families have choked a Caracas avenue as Christmas approaches to see one of the displays President Nicolas Maduro's government has strung over the Guaire River.

Not everybody was impressed. Barreling through traffic, one driver shouted sarcastically from his car window: "And people say there's a crisis in Venezuela!"

The lights glow as people still have painful memories from March, when the nation went dark for four days in the nation's worst-ever power failure. Millions outside the capital still go without lights — or any electricity — a good part of each day.

Guadalupe Fares, 36, took her two young children with her to gaze up at the millions of lights. She said she wanted to feel a normal life, at least for a few moments, but acknowledged mixed feelings.

"It's kind of bizarre because you see so many people in need," she said. "But at the same time, people are enjoying themselves."

Maduro's socialist government has staged more than 20 light displays across the capital of Caracas and several others in cities throughout the country.

The most stunning Christmas display is in Las Mercedes district, famous for upscale restaurants and pulsing nightlife. Strings of lights — reportedly 5 million of them — stretch for a city block over the Guaire River, notoriously polluted with Caracas sewage.

Packed cars cruised past with their windows rolled down, while children poked their heads through sunroofs for a better look. Families on foot strolled a walkway, stopping to squeeze in for selfies.

Residents say they don't recall such extravagant light displays previously, especially in the last few years as the once-wealthy oil nation has spiraled into political and economic crisis.

In most Caracas neighborhoods families shun the streets at night for fear of crime, and drivers keep their windows rolled up while carefully navigating around open manholes hidden in darkness.

Most homes don't have reliable water and drivers wait for hours, sometimes days, in most of the country to gas up — despite Venezuela having the world's largest reserves of oil.

Maduro's Culture Minister Ernesto Villegas shot back at critics of the light decorations on Twitter, saying everybody raved in 2006, when then-popular opposition Gov. Henrique Capriles decorated the same stretch of river.

"The unruly right is quick to criticize our Christmas lights on El Guaire in 2019," Villegas tweeted. "But it seemed pleasant enough when @hcapriles lit up Las Mercedes in 2006."

Critics of Maduro blame decades of corrupt socialist rule for failing to maintain the nation's power grid and other crumbling infrastructure.

For his part, Maduro has accused the "imperialist" United States of launching cyberattacks on the nation's power grid as part of a coup attempt to install opposition leader Juan Guaidó as president and exploit the nation's vast oil reserves.

Office worker Williams Chang, 34, walked with his family along a wide boulevard decorated with giant, illuminated candy canes, stars and trees wrapped with strings of lights. Until the lights went in, it was a place people avoid at night.

Chang said that while the politicians battle over control of the nation, they seem to forget that families throughout Venezuela are struggling without basic necessities.

He hoped that the lights aren't just a passing holiday celebration that will be taken down until next year, but rather the first step in reclaiming public space.

"All that Venezuelans want is to have a nice Christmas dinner, to spend quality time with our families and to go out walking without any fear of any danger," Chang said. "That's what Venezuelans really want."