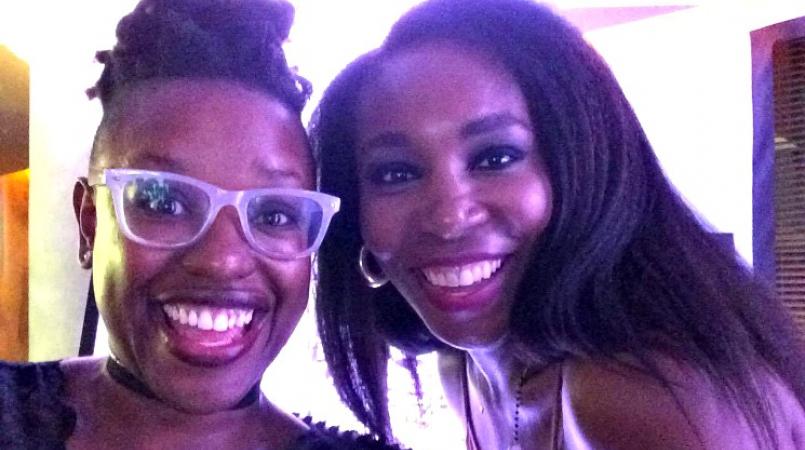 The value and cost of art by Barbadian Sheena Rose has escalated overnight as superstar tennis player, American Venus Williams outbid other collectors for a piece.

On the night of Thursday, December 1, Sheena’s life changed forever.

Invited by the Rush Art Gallery team to Miami to show her work as part of an online auction, Sheena is very grateful to Oshun Layne of the Rush team for suggesting her name to Russell Simmons and Daniel ‘Danny’ Simmons.

Sheena’s piece entitled ‘Under Construction’ is one of her Bridgetown drawings and it is now owned by the highest bidder, Venus Williams.

The money from the auction goes to the Rush Philanthropic Arts Foundation.

In a Skype interview with Loop, Sheena said,

“I got an email from Franklin Sirmans, the Director of PAMM, the Museum Perez Art Museum Miami. I'm very grateful to him. He forwarded me an email from Rush Philanthropic Arts Foundation. Russell Simmons had invited me to take part in the auction called, ‘Art for Life’ and this is where you donate a piece to help raise funds.”

Thinking back to how she felt on learning the good news, she said, “I felt so honoured that Russell Simmons, Danny Simmons when they invited me to be part of this important event.”

Sheena took us back to that day and played it our for us with her voice full of exuberance and enthusiasm. There is no questioning her passion when she talks art.

“I donated my piece and the day of it and the night of it, of the auction, the day time I went to a panel discussion talking about encouraging collectors to buy art to benefit the artists.

“I felt so honoured because this was a big, big deal to be aunctioned amongst these artists and others.” There were like 20 artists in total.

Sheena said when the collectors started to bid on her work, “It was truly surreal, amazing. Some of them said to me, ‘Wow I really want that piece’ or ‘Wow that is really amazing’ or ‘I’m thinking about.’

“For the whole night, you were seeing new bid, new bid.

“So I saw Venus Williams and I approached her and I showed her my work and she was like, ‘Wow, this is your work? I love it! I love it! I love it!’ So I was freaking out and I gave her a business card and she said, ‘Actually, give me two business cards.’ I asked can I take a picture of you and she turned and did the heart, like she really love it and we took a picture together. From there she said, ‘Yea, yea, I really like it.’”

She said that few others approached her that night and said they’re bidding on her work as well; “They are really fighting for it.”

Receiving six bids was really good for someone that is new among these artists, and by the end of the night Sheena amassed eight bids and was like ‘Woahhhh’.

At the end of the night, the auctioneer told her that Venus had won, and she screamed with glee and joy.

“This is a big, big deal because now my work is definitely, definitely going up. I have been in this art scene for eight years and I’ve been telling the Barbadians over and over and over buy the work before the artists get really established. It is an investment. It is business. It is money. So people that have a Sheena Rose already, you know they gone up now, that’s the truth. So collectors are very interested in me, people are watching me now.

“I’m really excited, and a little overwhelmed in a good way because a lot of buyers are interested. There is a list now of people willing to buy a Sheena Rose because it has become a brand.

“Venus Williams owns a piece and one or two other celebs are interested, but I won’t say.

Further North in the United Kingdom, Sheena is making waves as well. Last summer Inivia Museum asked permission for one of Sheena’s pieces called ‘I didn’t call you to insult me’ and it’s out now thanks to Melanie Keen.

“So even in London, my work is in this stack of cards in contemporary art among top artists like Chris Ofili, Sonia Boyce and Yinka Shonibara that’s amazing within my short space of time. So I gotta keep working.”

Next up for Sheena while in Miami next week is a showing at the PRIZM Art Fair for Black Diaspora artists. The Curator and Director, Mikhaile Solomon invited artsits from Caribbean, North America, South Africa and Europe.

Sheena is working now with an Assistant Akilah Watts. Smiling she said, “my life is becoming a business.” Sheena said that Akilah is an artist and she has helped her a lot, arranging studio business and much more as part of her internship. Sheena is excited to travel and take Akilah along for the ride.

At home recently, Sheena had a solo show ‘Baby Pink’ at the Errol Barrow Centre for Creative Imagination through the Institute for Gender Development Studies. In attendance were Naomi Jackson, the author of The Star Side of Bird Hill, which features a picture of Sheena Rose on the cover, and there was a panel discussion with Dr. Tonya Haynes as part of the solo show.