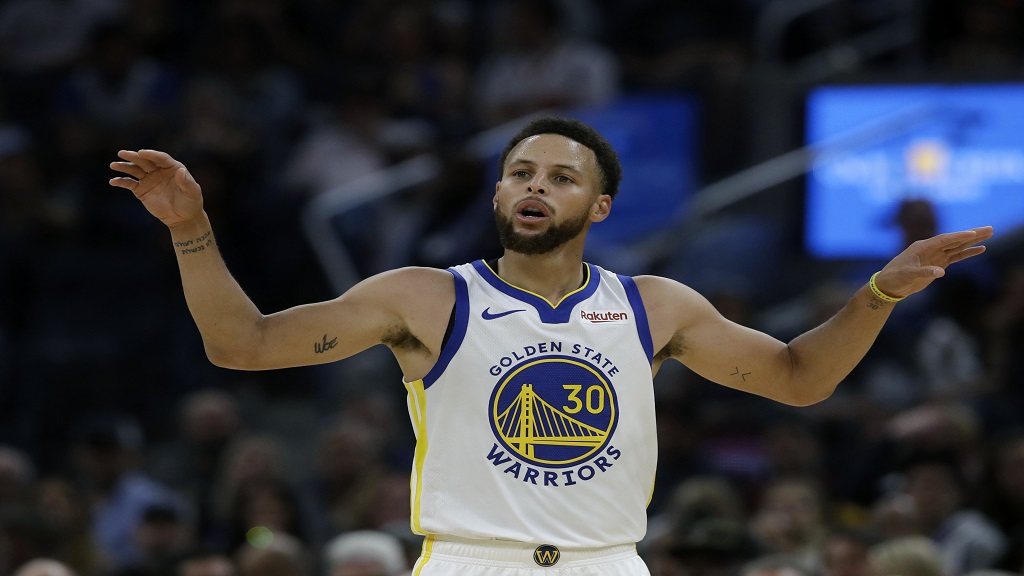 Stephen Curry knows how different this season will be.

He realises many aren't considering the Golden State Warriors a clear contender even following five straight trips to the NBA Finals.

No Kevin Durant. No Andre Iguodala. No Shaun Livingston. And that's just to name a few of the departed players who had made such key contributions to the franchise's recent runs of success.

Klay Thompson is recovering from surgery for a torn ACL in his left knee and likely will be sidelined well into next year.

There's also a new arena. In another city, no less, with the Warriors moving from Oakland across San Francisco Bay to sparkling new Chase Center.

Not that Curry is expending too much energy on these potential distractions. The two-time MVP plans to keep the Warriors a consistent winner even with all the change.

At age 31, Curry is the old guy around Golden State, and new backcourt mate D'Angelo Russell can't wait to learn from the two-time MVP.

"Stop reminding me!" Curry said emphatically of his senior status.

"Just hearing it is weird, but I'm still young. I wake up every day with a smile on my face, with the opportunity I have in front of me, being in my prime, being able to play basketball at the highest level and do it with this team and in front of our fan base, and I know I have a lot, a lot of years left at this level," he said. "It doesn't change anything but just makes me laugh, and for people to notice some gray hairs that might pop out every once in a while. But other than that, it's kind of business as usual."

Still, general manager Bob Myers acknowledges it's not realistic for any team to remain elite all the time.

"It's a new dawn for us, but it's OK," Myers said. "We haven't been in this position for five years. It's going to be fun. It doesn't mean it's going to be easy. Because when you have young players there's a learning curve to their growth, to their NBA experience."

Here are some things to watch for as the Warriors begin a new era of sorts:

Draymond Green, who received a $100 million, four-year extension, said all along he would like to retire with the Warriors, and committing to playing with Curry and Thompson for the immediate future means a lot. Thompson stayed put on a $190 million deal spanning the next five years.

Not having to think about what's next allows Green to focus just on basketball.

"I didn't want to come into this season dealing with all of that stuff. It kind of becomes a headache," he said. "It definitely played a little part in it, and just understanding what was best for myself and my family and for this organization. You know, I think I've said a million times now, I want to be here for my entire career. What makes that possible? What makes that more realistic? I think this did."

Thompson was injured June 13 in the deciding Game 6 of the Warriors' NBA Finals loss to the Toronto Raptors. The Warriors don't expect him back until at least after the All-Star break.

Thompson plans to be smart about his return from a July 2 surgery, even though he is someone who never likes to miss time.

"I've become much more sympathetic to all athletes at all levels who go through a major injury or surgery. It's not fun, and it really tests your patience," Thompson said. "But it's our job to come back even stronger, and the team has faith in me to do that."

Russell is ready to take on a large role, while also learning from Curry, Green and Thompson about how things work with Golden State.

Other new faces include Willie Cauley-Stein and Glenn Robinson III.

Moving to Chase Center will be a big adjustment, too.

"It's still always bittersweet for sure, because I've spent 10 years here," Curry said. "I remember my first training camp with Don Nelson and Kelenna Azubuike and that whole roster and now 10 years later all that we've been able to accomplish. A lot of guys that have come through this organization and help us win championships, a lot of memories. ... It's still kind of down the road where you can't really understand what it's going to look like, what it's going to feel like to go to a different building."