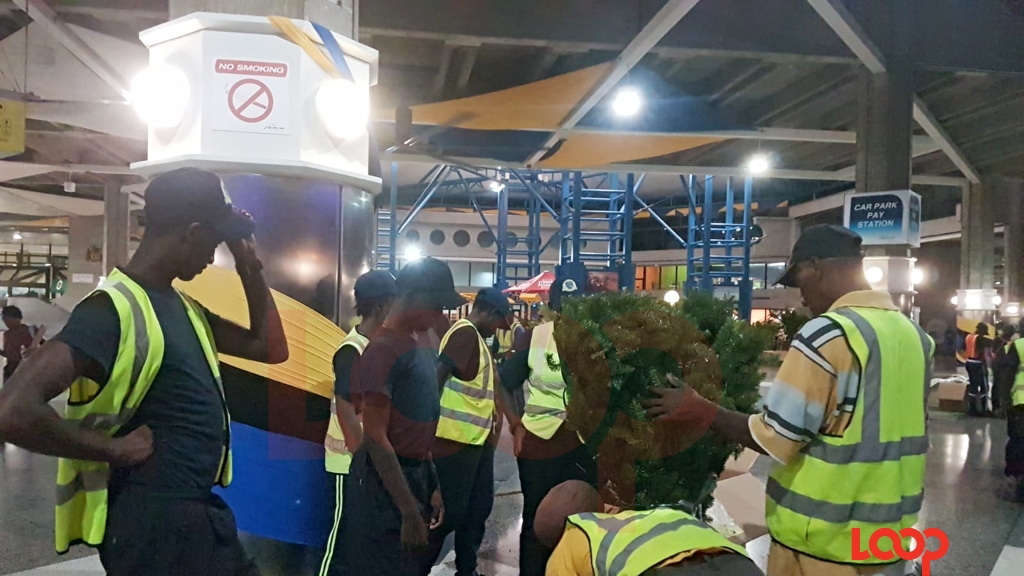 The trees were setup by trainees - cadets and participants of the Barbados Youth Advanced Corps (BYAC).

For the first time, the Grantley Adams International Airport (GAIA) has been included in the Christmas Tree programme hosted by the Royal Commonwealth Society - Barbados Branch.

Usually situated throughout town at locations such as Independence Square, Heroes Square, Jubilee Gardens and the General Post Office in Cheapside, the trees have now expanded to the parish of Christ Church.

Loop News caught the trainees - cadets and participants of the Barbados Youth Advanced Corps (BYAC)- as they walked the length and breadth of the airport with the trees and then we watched as they assembled them on Monday night.

Speaking to us, Instructor with the Barbados Youth Advanced Corps Christopher Padmore said this is the first time being involved in this project for most of the trainees - but he hopes they benefit from it.

Asked how he feels after the setup and launch when the trees are lit and Barbadians and visitors are wowed, with a big smile he confessed:

"It's a sense of pride, it's a joy, cause these kids, a lot of them are like superannuated from schools and stuff and it's always good to see them involving themselves in something that is really great and giving back to the country."

It was 62 young men and women between the ages of 16 and 20 who completed the task along with some adult assistance and supervision. They worked efficiently despite the intermittent showers on the night.

With relation to the decor for the trees, Padmore explained" "Normally what happens is the cadets and the Barbados Youth Advanced Corps, they normally come and do the installation and the pick down, but other schools would send volunteers and stuff to decorate the trees." However, he says he is not sure if that's the plan for the trees at this new location.

The Royal Commonwealth Society - Barbados Branch will launch the Christmas programme in Independence Square with Christmas in the Square on December 12, 2019, at 4.45 pm.

It will be in association with the Barbados Defence Force (BDF) which is celebrating its 40th anniversary. There will also be a parade and performance by the mass band comprising the BDF and the Barbados Cadet Corps.

WATCH: Christmas in the Square 2017 not over