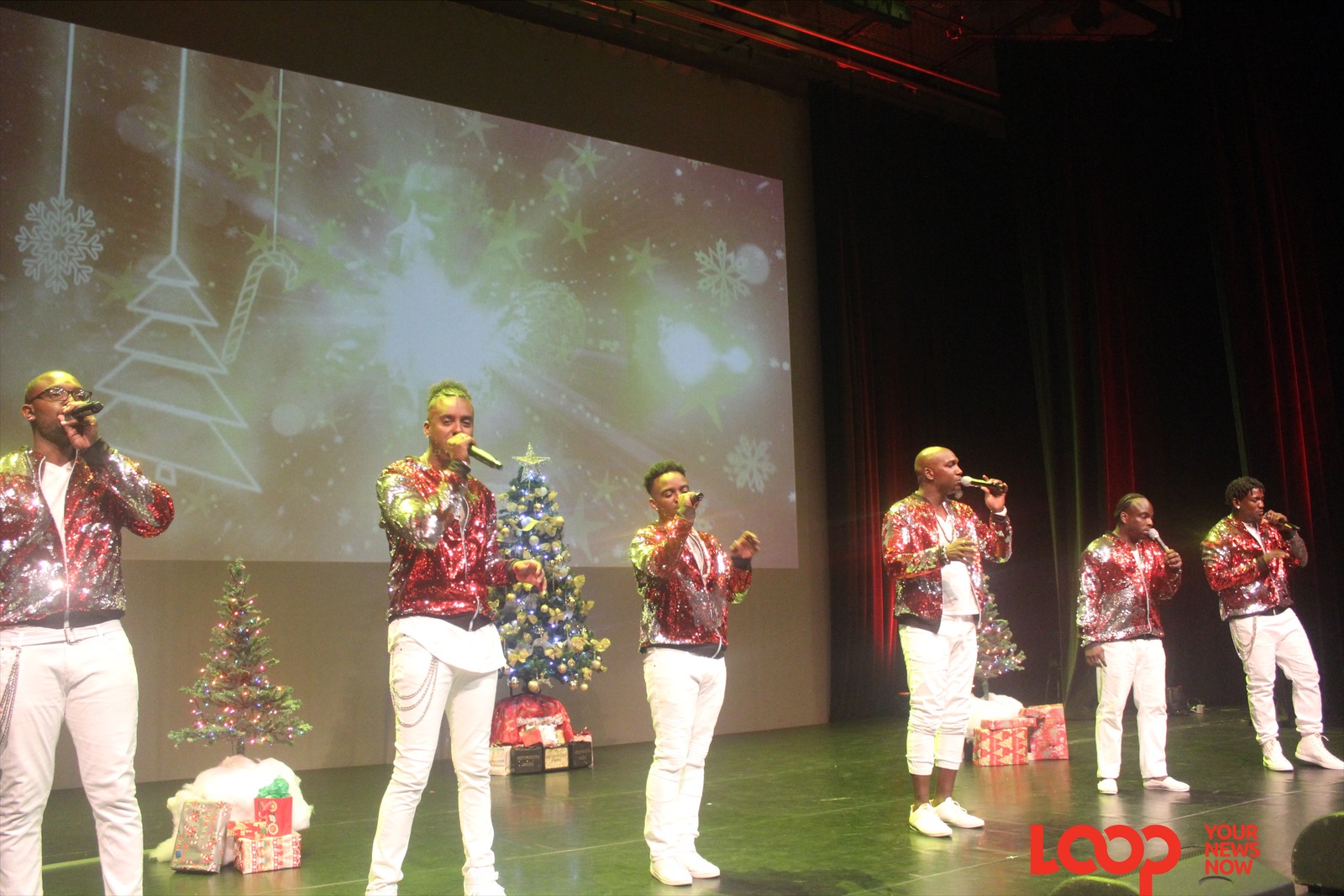 Fans of local vocal band G-Syndicate have grown accustomed to spectacular shows with numerous wow moments and last Saturday night the group did not disappoint.

Although the auditorium of the Errol Barrow Centre for Creative Imagination (EBCCI) was not filled to capacity, those who came out to their signature show - “Christmas with Syndicate” left with absolutely no regrets.

Before the official 7pm start, patrons were entertained in the foyer of the EBCCI by Angel Stringz, a string quartet known for its unique arrangements of contemporary music. They set the tone for the beautiful evening of talent that unfolded.

The mood of the show’s first half was a jazzy, mellow one,enhanced by skillful saxophonist Mylon Clarke. He accompanied G-Syndicate for a few selections including Edwin Yearwood’s “Christmas Without You”. The a cappella group went on to render several traditional Christmas selections including “Angels We have Heard on High”, “The First Noel” and “Hark the Herald Angels Sing” adding their inimitable stamp to these aged classics. At one point in the latter song the harmonizing of their voices seemed almost ethereal. Their cover of Luther Vandross’ “This is Christmas” was especially riveting and if anyone present had not yet felt the Christmas ‘spirit’ then the song’s rendition did just the trick. 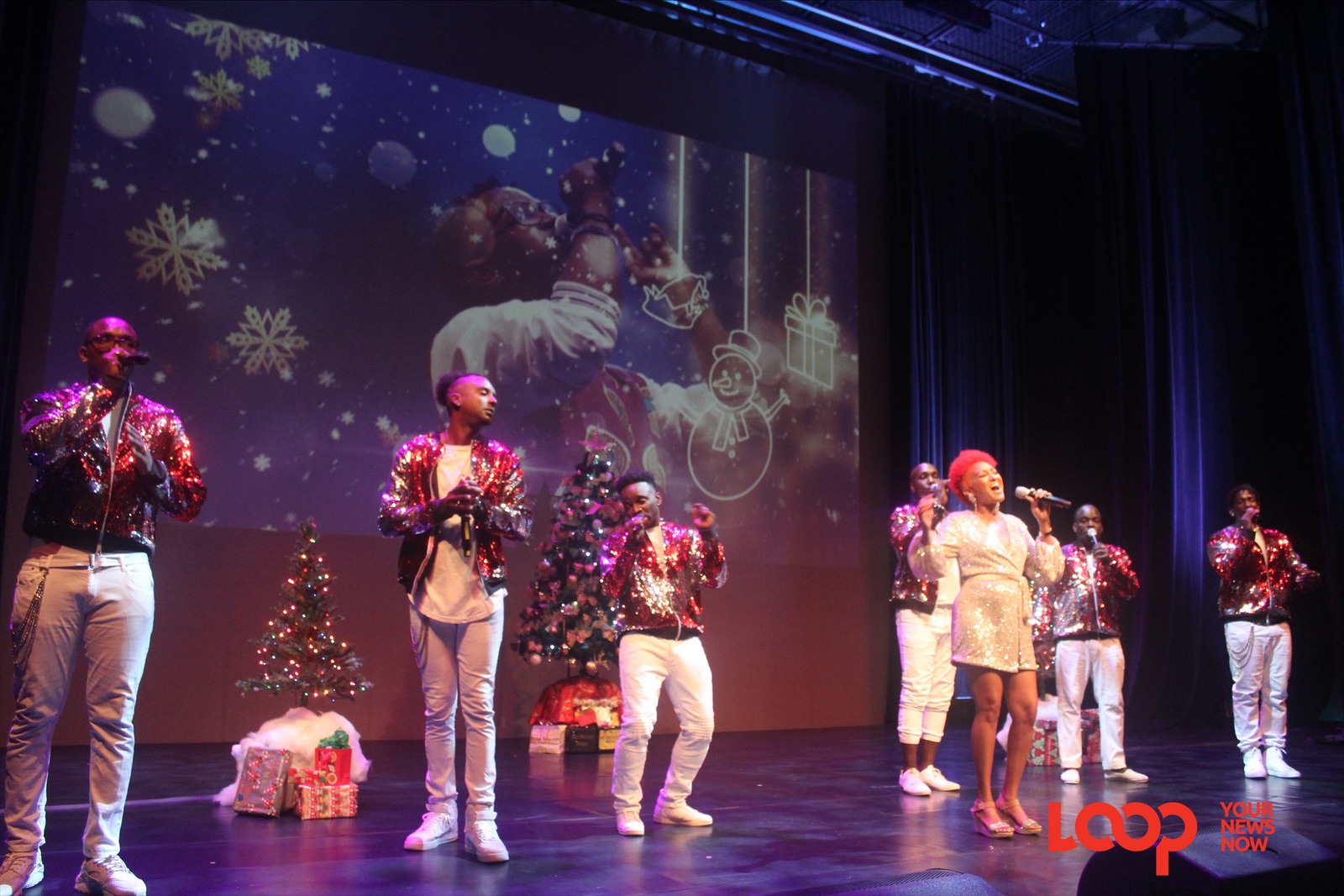 The soulful Betty B was one of the guest performers in the show’s second half. Her crisp vocals blended beautifully with those of the six-member band in both of her renditions. Hashim Durant was especially thrilling on pan and his collaboration with G-Syndicate earned them a thunderous applause. The all-male ensemble delivered a slew of reggae-infused selections such as Sach Moore’s “Wuh Yah Gotta Gimme Fuh Christmas” and Biggie Irie’s “Gather Round the Christmas Tree”.

In true G-Syndicate style, the group succeeded in making the Jackson’s 5 “Up on the House Top” their very own with the inclusion of lines which took a stab at bandmates Derek Marshall and Brett Linton. This was especially humorous as it was led by Khiomal Nurse who was referred to as the group’s “pocket-sized Stevie Wonder” by Marshall earlier in the show. Antonio Edwards’ bass voice was a hit with the ladies while Marc Sealey’s harmonica-impression was on point. Taurean Knight’s transformation into a human trumpeter seems novel each time and Brett ‘the drummer’ Linton is nothing short of impressive.

The talented group treated those present with their own version of “Mary Did You know”, which was released this season. Although they performed this song expertly in the first half, the audience loved it so much that repeated requests saw them delivering it again. The cat-calls and whistles from the audience culminated in a standing ovation at the conclusion of the group’s second-half rendition.

The show ended on a wonderful high as fans refused to allow the sweet-sounding sextet to leave the stage without accommodating their requests for more selections. This led to G-Syndicate adding about three unrehearsed selections, which they delivered with their customary resplendence, even including a hilariously-jumbled version of “The Twelve Days of Christmas” which left the audience in stitches.

G-Syndicate continues to prove that there is something uniquely special about them with their fresh arrangements, always adding their indelible Caribbean flavour and leaving their fans craving more.

By the end of the night a few lucky patrons also walked away happily with some tangible treats as giveaways happened throughout the show. Donations were made to the Precious Touch Foundation as well as the HIV Food Bank also. (KMT)

WATCH: Something for everyone at G-Syndicate Christmas Concert