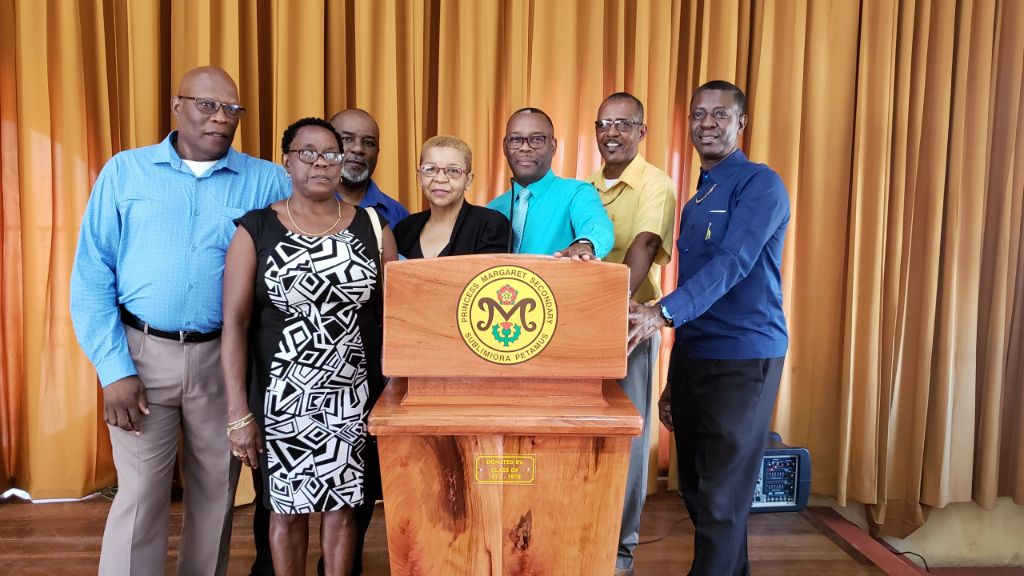 The principal of the Princess Margaret Secondary School had the paint, and old scholars from the Class of 1972-78 had the time and effort to paint and powerwash their old school.

But that's not all the old scholars did. With some funds raised amongst the local members and those in the Diaspora further afield, they were able to purchase some new equipment and resources for the school that’s still dear to them as well.

On behalf of the students from their year at the Six Road, St. Philip educational institution, Willie Blackman, Jeffrey Brathwaite, Orville Hall, Amrel Gooding-Phillips, Stephen Arthur, Myrtle Fields and Andrew Shepherd made the presentation and did the hard work over four consecutive weekends leading up to the start of the third term.

Speaking to the students during full assembly, Secretary-Treasurer Gooding-Phillips told the students that this will not be their last presentation to the school.

“We tried to spruce up the school in your absence… Just remember this is the start of things to come. I think our group is about 80 persons strong with we have a local representation of just about 65 or 70. The others are in the U.S.A but they too have been giving their support.

“I would hope that you will appreciate the work that was done. In addition to the power-washing, and painting around the bathrooms and whatever, you would see that the area where you to refer to as the gazebo had a good spruce up…”

Principal Jonathan Corbin assured the students that the promise of future assistance made by Gooding-Phillips was not empty.

He thanked them for removing the old flaking paint, mildew and dust.

The power-washing resources were donated by Hall.

On the final weekend, before school resumed, the old scholars were joined by some Girl Guides and teachers to put on the finishing touches.

Overall, the roofs at the school, corridors and bathrooms were power-washed; then the bathrooms and the gazebo were repainted. The gazebo is to be used as the new Safe Space for students to express themselves and learn new skills.

The Class of 1972-78 also donated a spanking new podium with the school crest and motto on it and it has a very sensitive gooseneck podium microphone as well. The podium was built by Brathwaite and unveiled by Hall to loud rousing applause, screams and catcalls by the students who greatly appreciated the contribution.

Deighton Griffith Old Scholars give back as alma mater celebrates 25