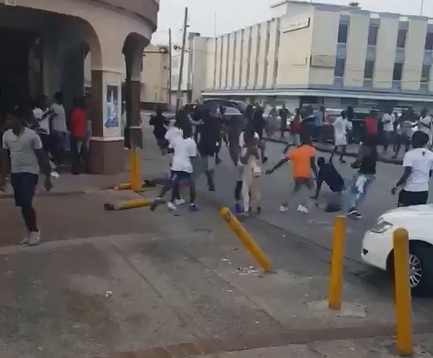 A still from the video of persons involved in a brawl on Wharf Road yesterday.

Police can launch investigations into disturbances without any report of an incident.

Speaking to Loop News about a scuffle which occurred around 5:15 pm yesterday at the Wharf Road in the City, he said that an investigation has been launched into the incident which was recorded and circulated on social media:

"We received the report that there was a fight at Wharf Road and when we responded the fighters or persons involved in the fiasco had already left the scene."

While persons continue to be cautioned about using social media to share content which may not be substantiated or may be considered to be offensive, police can use posts from the various platforms to launch investigations into unreported matters.

Inspector Cobbler noted that police could take action without a report in such situations where persons are causing a disturbance in a public area:

"We still need evidence and the video would show what normally can constitute a breach of law, whether it is causing a disturbance or fear of violence.

"You then need somebody willing to come forward to give evidence as to what would have transpired. So there are a lot of logistics involved."

He however stressed that "a report was eventually made by an individual, so we are carrying out investigations" into the incident at Wharf Road.

Social media can land you in prison