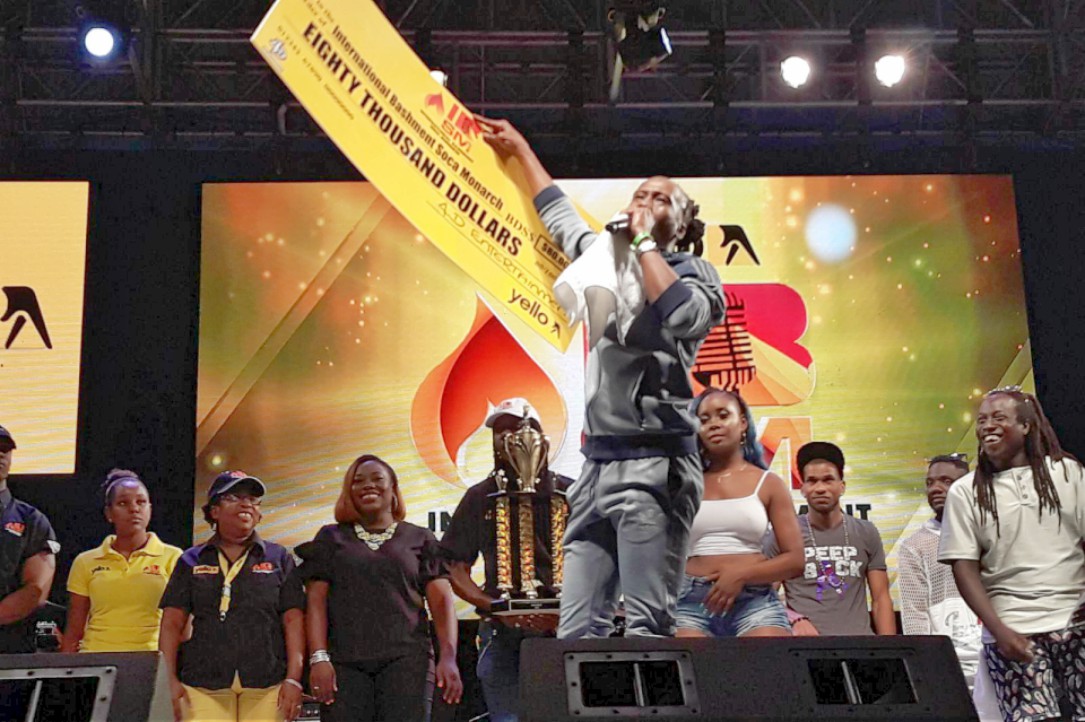 From the moment Lil Rick hit the stage it was clear that he was a force to be reckoned with.

He brought energy and the crowd responded by throwing support wholeheartedly behind the 'Hypa Dawg'.

When MC DJ Ras asked the crowd "who do you have as the winner," throughout the night, the response from patrons remained consistent with Lil Rick winning their vote.

Even when the former Bashment Soca King, Stiffy performed, patrons called it out as a battle between the reigning king and Rick, who was a first timer to the competition. However, judging from the stellar performance Rick put down, there was no doubt about who the winner would be.

Lil Rick's energy and stage presence were undeniable throughout his performance of 'Bend It'. Although the song is not as popular as his 'True Story', no one could dispute that his delivery was A-class.

His dancers matched his energy perfectly, engaging in a variety of contortionist positions in line with the song's theme.

Walking away with the grand prize of a whopping $80,000, the artiste was ecstatic when the results were announced.

2017 Bashment Soca King, Stiffy was hoping for another birthday gift this year with his track 'No Boring Girls Allowed,' however, his performance was not enough to beat out a talented Lil Rick.

Related article :Jus D's Manager is hot in the fetes and in the Bashment Soca Final mix

Jus D's presentation of 'Manager' was impressive, in fact, following his performance many patrons singled him as another contender for the crown.

Marzville brought another exciting performance this year. He went all out with his presentation of Roughness, which finished with an array of colourful paper confetti and fireworks.

Although patrons were not familiar with Sita's "Hammer", the young Vincentian gained the approval of patrons who screamed and threw their hands in the air when she dropped piccong bars at the end of her performance. She was sure to tell Stabby 'Go Stabby Go' as she pointed off the stage.

Unfortunately, Scrilla, who was hoping that his Bashment Anthem would land him the crown this year will have to wait until next year for another shot, but he reminded the crowd and his competitors that he never fears hitting the stage in that number 1 spot.

'Landship Generals' Porgie and Murda's delivery of 'Come Down' could be described as a cultural showcase when dancers, drummers, green monkeys and a Mother Sally hit the stage.

Other finalists Rhea, Jah Reddis and Jagwa The Champ were successful in their deliveries however it just was not enough to take them anywhere close to the crown. Stabby left his fans confused during his presentation when he stopped his track and introduced other elements and speech that had people with looks of 'What is going on?' on their faces. St. Lucia's Freezy was in the mix of 12 too, but he said that he came to represent not compete and showcased his island's culture with his Dennery Segment style, which is kind of the Lucian equivalent to Bajan dialect.

Cancelled Soca Beach event may come off another time, another place