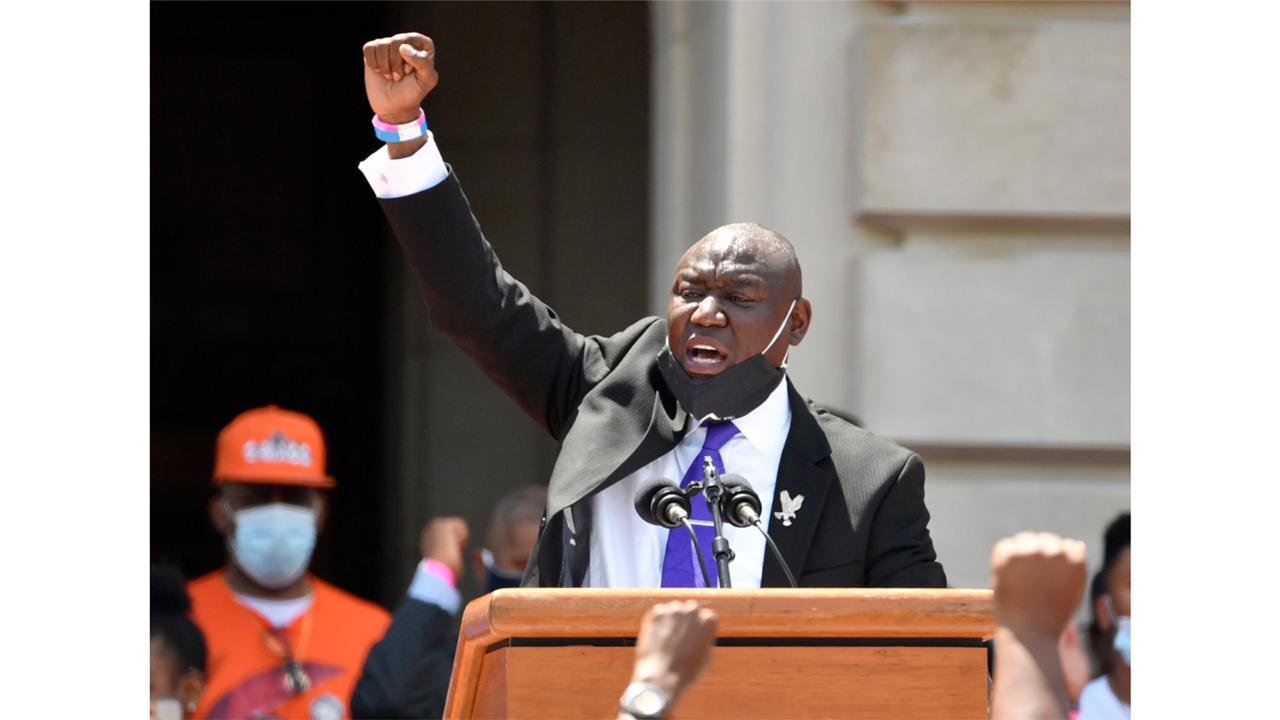 In this June 25, 2020 file photo Attorney Benjamin Crump speaks to a gathering on the steps at the Kentucky State Capitol in Frankfort, Ky. Crump is representing the family of a Black man who was shot and killed Los Angeles County sheriff's deputies after he was stopped for a traffic violation while riding a bicycle and later "made a motion" toward a gun on the ground. (AP Photo/Timothy D. Easley, file)

A grainy video shows a Black man stopped while riding a bicycle struggling with a Los Angeles County sheriff's deputy. But it doesn't confirm whether he reached toward a dropped gun before being shot and killed, as authorities contend.

Monday afternoon's killing of Dijon Kizzee, 29, in South Los Angeles follows several other shootings of Black men that have sparked protests around the nation.

They include the police shooting of Jacob Blake, who was left paralyzed last month in his hometown of Kenosha, Wisconsin.

“When officers shoot first and ask questions later, precious lives are lost and police lose credibility and trust from those they are sworn to protect,” Crump said in a statement.

Kizzee was riding a bicycle when sheriff's deputies tried to stop him for an unspecified traffic violation, according to an account from the Sheriff's Department.

Kizzee dropped the bike and ran before deputies caught up to him. The Sheriff's Department account said he punched a deputy in the face.

A 41-second video obtained by the Los Angeles Times shows a police SUV stop in a street. A deputy gets out, runs around a parked car and appears to try to grab Kizzee as he walks down the sidewalk. They tussle, standing, and move down the street together for several seconds. Kizzee appears to throw a punch, although the view is too unclear to confirm whether he struck the deputy.

The video then shows Kizzee breaking free, stumbling and falling to the ground. A second deputy arrives. Within about 2 seconds, they repeatedly open fire.

Sheriff's officials have said a gun fell out when Kizzee dropped a jacket as he fell to the ground and he “made a motion” for the weapon — prompting the shooting.

But on the video, a fence obstructs the view at that period in the sequence of events.

The Sheriff’s Department provided no new information about the case on Wednesday.

Authorities haven't said how many times Kizzee was shot. The video had no audio.

However, the Times said another video from a front-door camera that didn't show the shooting recorded the sound of 15 gunshots over 10 seconds.

There isn't anybody camera footage because deputies in the nation's largest sheriff's department aren't equipped with them. The county Board of Supervisors on Tuesday approved funding, and the first group of deputies will be equipped with cameras next month.

Kizzee’s relatives have described him as devoted to his late mother and 18-year-old brother. They said he was an energetic man who loved go-karts, cars and music and that he was working toward becoming a plumber.

Sheriff Alex Villanueva offered his condolences to Kizzee’s relatives on Tuesday, who he said includes a cousin who is a Sheriff’s Department member.

Residents on bicycles in communities of colour are regularly stopped for supposed vehicle violations, said Donny Joubert, vice president of the Watts Gang Task Force group in Los Angeles that was created to reduce gang violence and improve community relations with police.

“They’ll pull you over on a skateboard,” Joubert said. “It means our kids can’t even ride a bike in their community without being blamed for something or being accused of something.”

“It is not something with which those who are involved in criminal justice reform and representing clients are unfamiliar,” he said.

Statistics nationwide show that “biking while Black” can result in disproportionate citations for people of colour. A 2015 Tampa Bay Times investigation revealing that eight out of 10 bicyclists ticketed by Tampa police were Black prompted a federal probe.

A Chicago Tribune review in 2017 found that more than twice as many citations were written in African-American communities than in white or Latino areas.

The Los Angeles County Sheriff’s Department did not provide statistics regarding bicycle stops and citations on Wednesday. The Los Angeles Police Department’s figures do not break down vehicle stops by category.

Protests erupt after Wisconsin police shoot man from behind