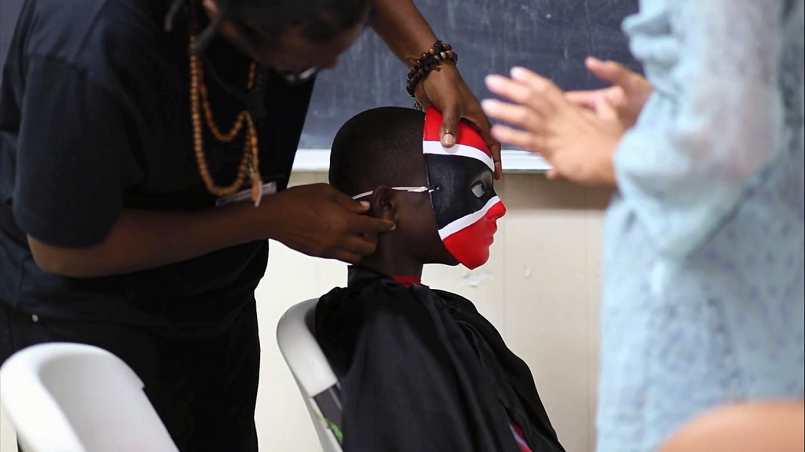 Children from across the country, some with troubled backgrounds, found a common theme in local docudrama ‘Super Me’ by conquering their inner villains and becoming superheroes.

The 45-minute feature, which was created, filmed, directed and produced by artist Jaime Lee Loy, has become a powerful tool in bringing attention to the challenges children face, as well as the use of art therapy and its potential to help their development.

Lee Loy, who is also an artist and writer, said it all began with her wanting to get her daughter involved in doing charity work.

“I started wanting my daughter to become involved in things that promote social responsibility. I have a background in that, I’ve worked with NGOs before and have always been that inclined.”

The film originally started as a small project in 2012, which consisted of a drawing collection made by children who came together from many different backgrounds and from areas throughout both Trinidad and Tobago.

However the project soon took on a life of its own, says Lee Loy, who employs the use of art therapists to instruct and assist in the exercises.

“The concept behind Super Heroes is that you picture yourself as a superhero, and it has to be tied in some way to who you are, and if you could change the world, what would you do?”

“It’s a lot of introspection.  We bring out a lot of issues like self-esteem, confidence, leadership, and that whole idea of wanting to help others.”

The children in the film, whose ages range from six to 12, tackle issues like crime, pollution, the environment, children's rights, as well as how their superpowers will help them to fight these issues.

Their imaginary powers range from shooting lasers from their eyes or hands to physically freezing enemies or even drawing and writing things to life.

But playfulness aside, the film has a dark underbelly - while focusing on the positivity of the exercises, viewers are, at times, reminded that some of these children are battling inner demons.

“It was a very emotional experience, I know some of the stories of these kids, which can’t be told, these are real situations. Some of these persons may have moved from the home because they are too old and might even be homeless, I don’t know. Some of them have HIV, some kids are on the run because of abusive families.”

Lee Loy says it is for these very reasons this project is so important.

“I find that through this role play it does help. In psychology this technique is sometimes used to look at yourself in the third person to help address different issues, like fears.”

“Letting kids talk through things like art or playing is easier than openly telling adults, sometimes it’s easier to do it through creative means.”

“For example we have a concept called a ‘safe box’. So if you’ve been abused or are afraid, we can use this space to help you feel less afraid.”

Lee Loy says the project was inspiring and will help viewers to see this side of society not as something to be hidden but something to focus on.

“I found it was very beneficial for everyone involved. You learn so much from them, you’re so inspired by them.”

“This film has a life of its own now, even if you don’t know their personal stories or if they don’t know how far it has reached, the film is not just a film, it was made to be a message to influence everyone who sees it.”

"I hope it inspires everyone to take action and help create change in their own communities."

The film is great for both adults and children from the ages of seven years and up.

For more information on films at the Trinidad and Tobago Film Festival 2016, go to http://ttfilmfestival.com

Find out more about 'Super Me' on Facebook: https://www.facebook.com/supermefilm