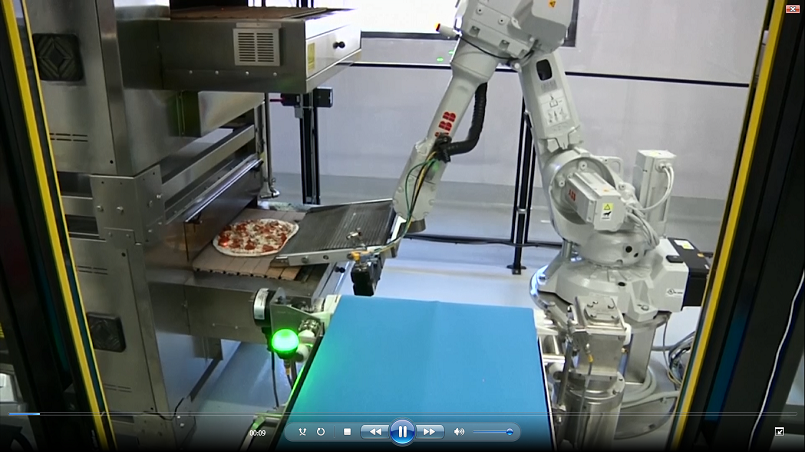 A tasty-looking pizza slides along a conveyor belt.

But this isn't a regular food production line, because waiting to pop the pizza in the oven is not a factory worker, but a robot!

"We spend less money on repetitive labour, so things like slicing pepperoni or applying cheese," explains co-founder Julia Collins. "We automate those repetitive tasks, so that we can spend more money on higher quality ingredients."

Zume pizza is one of a growing number of tech firms seeking to shake up the food industry with software and robots.

Here robots add the sauce, spread it and put pizzas in the oven.

The Mountain View-based start up will soon add robots to prep the dough, add cheese and toppings, take pizza out of the oven, cut them into slices and put them in boxes.

But Zume says its biggest innovation will begin this Autumn with a delivery truck, equipped with 56 ovens to bake pizzas en route to customers - guaranteeing they get them hot.

The company also plans to shorten delivery times using software to anticipate when and what kind of pizzas customers will order.

Customer Charity Suzuki is a fan of the robot-prepared pizzas:

"It's delicious", she says. "It's always hot and fresh when it comes. I mean it's great that they're making it, but I can't tell the difference that it's made by a robot versus a human."

Prefer sandwiches to pizza? Then why not try San Francisco-based Bistrobot.

Customers pick their sandwich fillings using a touch-screen and then watch as a machine puts together their meal.

"It's quicker, it's cheaper, it's more consistent and it's just this really fun experience to share with people", says BistroBot CEO and founder Jay Reppert.

Experts say automation like this looks set to grow in restaurant kitchens, but they insist robots still struggle with tasks that require more refined motor skills.

"The research has been going on for 50 years. We're making progress, but it's still a challenge. So I want to reassure restaurant workers that the skills that they have are still going to be of value."

And one thing robots definitely can't do? Savour the flavour of a good slice of pizza.