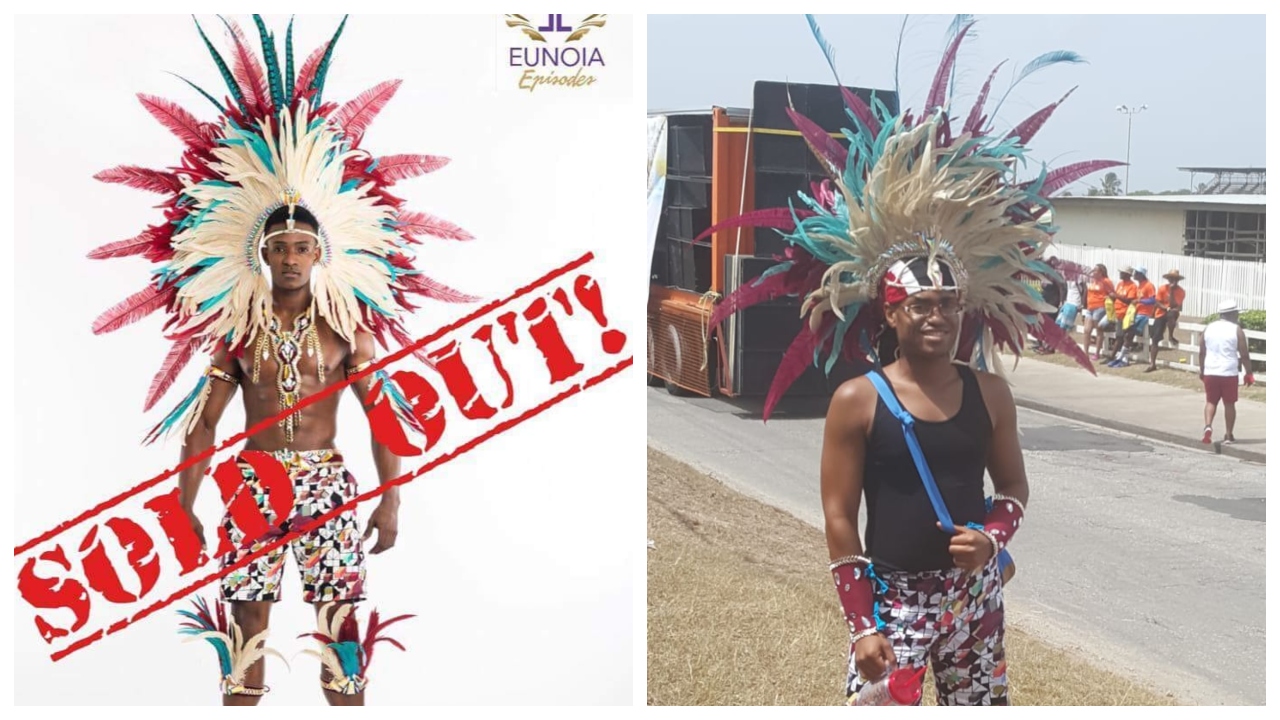 (Left) The expected costume his friends paid for; (right) the version of the same costume he settled for and made with the seamstress. John-Paul made his own arm and leg pieces.

The Fair Trading Commission (FTC) has reported receiving complaints about two Grand Kadooment bands and one overseas customer who paid to jump with Eunoia Band confirmed that he lodged a complaint against them this week.

This news comes after customers who registered with ERUP the Band spoke to Loop News about their experience and confirmed that they too had lodged complaints with the FTC.

John-Paul, who has played mas in Trinidad for more than 10 years, said that his Crop Over experience has left such a bad taste in his mouth that he does not believe he will be giving any other Grand Kadooment band a try in the future.

The Trinidadian who flew in to jump with his friends said, “Ultimately this will be my last Kadooment. This experience has been traumatic. Too many tourists are experiencing this in bands now, such as Erup. It has to stop.”

Speaking to the issues he experienced. He said it all started when he went to collect his costume on the allocated date.

“They put on social media to come on Friday [August] 3rd for my costume. When I got there, the band leader said, ‘Oh I didn’t think to call you yuh know’. He said that the producer missed their flight out of Trinidad and as such they did not have the feathers or gems to finish the costume.

“I said, okay cool. I complained about the lack of a phone call but I said can I have all remaining pieces please.

“He made me sit for 30 minutes. Then a band house worker went to see what was taking so long. Eventually he calls me back to tell me that no pieces are ready. No belt, arm piece - nothing.

“I get very mad at this point and he asks me to come back on Saturday.” 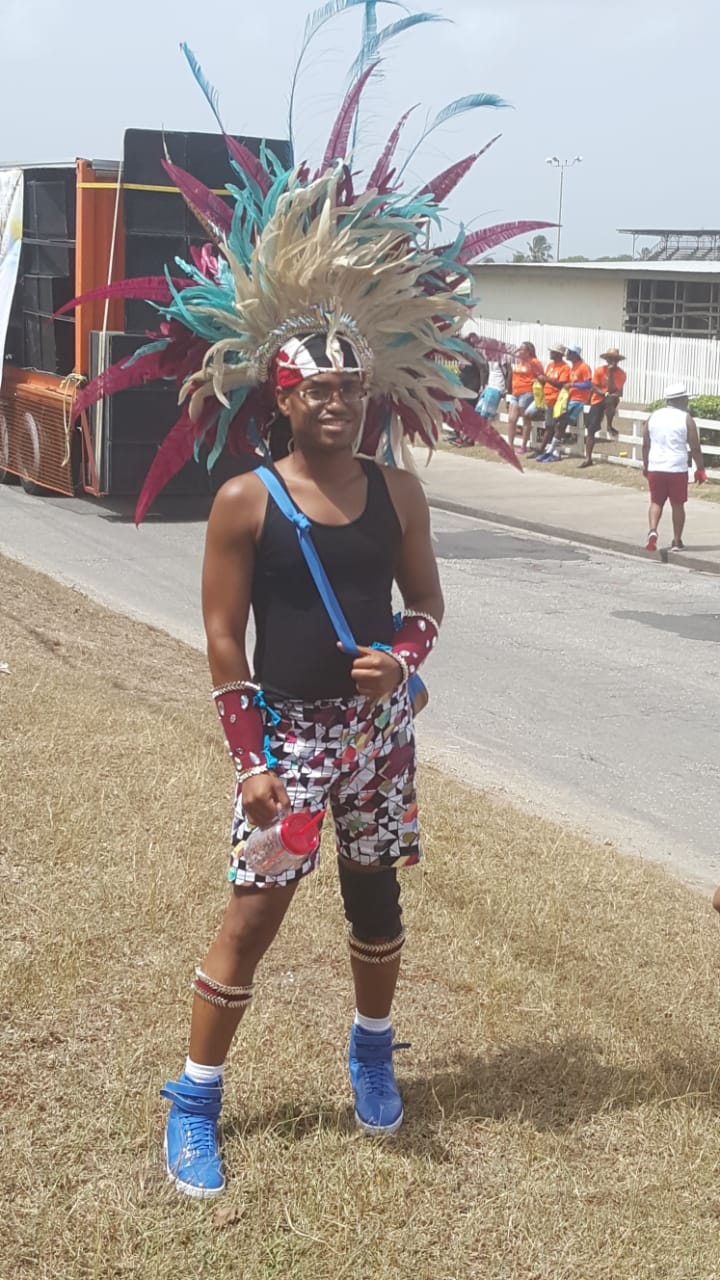 Next day he is set to return to the band house with his friends’ as Saturday is their original collection day. But that did go to plan either.

“At 5:00 pm on Saturday, a lady from the band calls my friend to say that because of flight delays, both their and my costumes are not ready, and to come back on Sunday morning between 7:00 am and 12:00 noon.

“When we get there on Sunday at 9:00 am. The band house is locked save for two men acting as security. No additional staff can be seen. Band leader says he is on his way. Another woman is outside since 7:00 am waiting for her costume.

“When the band leader finally shows up, he lets in people two at a time. He gives me a headpiece but I soon realise that it is the prototype. The fabric is brown from sweat and hair is stuck in it. I said, ‘No, I am not taking this’. He then tells my friends that the band was unable to get the large feathers for the headpieces, so small headpieces were made instead.

“Everyone starts to make a scene. He says that I can switch to my friends’ section and we will all get those costumes at 4:00 pm.”

Related article :ERUP dealing with received complaints to move past 'this upset'

However, according to him, the nightmare does not end at four o’clock as he would have hoped.

“When we come back at 4:00 pm the headpieces are ready but the wire was poorly bent. It cannot stay on anyone's head. Leg and arm pieces are poorly made. We are still waiting for our pants. No pants. He gives us some bullsh** story about the pants being too big and they were sent by a seamstress on Baxter Road to be altered.”

Well if he thought that would dissuade them in any way, he thought wrong.

Reflecting on last Sunday, he said, “We call around to find where the seamstress lives. We had to go and help her make the pants ourselves. Put the hem and buttons and all. We left her place at 11: 00 pm. We missed a party we had already bought tickets for because of this disaster. We got no cups or wristbands.”

He said that the band posted a notice on Instagram to meet by the National Conservation Commission (NCC) on the outskirts of the National Stadium for 8:30 am for breakfast, “we get there at 9:00 am and no band officials are there. Masqueraders started assembling and nothing. The trucks did not show up until 12:45 pm. Our jump started at 1:00 pm. The breakfast that we got at 1:00 pm was cheese paste in a roll or a fish cake in a roll. We did not cross the stadium stage. We got our wristbands at 1:00 pm.”

Asked what was the worse part of this whole saga, without a doubt, he said, “The most hurtful thing was seeing committee members of this band jumping in the prototypes and well-constructed costumes, while we were given junk.”

In addition, unlike disappointed revellers with another band, he said that he was still in the dark as it relates to receiving any kind of communication from Eunoia. “It is now Saturday and I am yet to receive an apology or a partial refund.”

His friends have been making calls to no avail as they have so far gone unanswered. John-Paul said that he emailed the Fair Trading Commission.

In terms of if there were any silver linings throughout the whole debacle, he said, “The pants that the seamstress made was the only great thing about this experience. She was so helpful. Drink staff worked well and the road DJ was good.... It [the jump] was okay once people got drunk. But I was just so exhausted from the whole ordeal.”

FTC To consumers: Be cautious at Crop Over