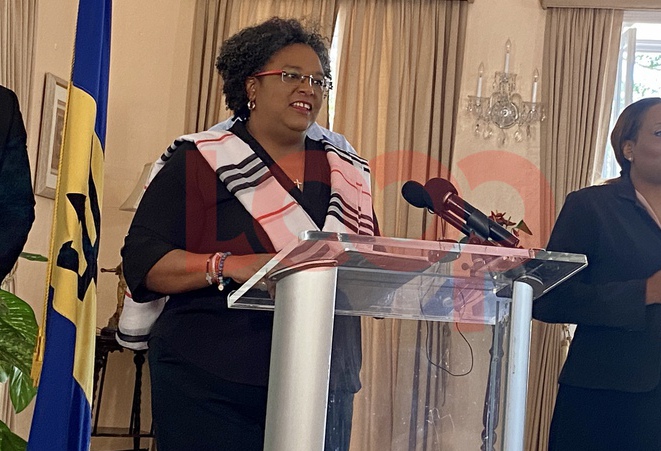 Barbados Prime Minister Mia Mottley has declared that persons arriving in Barbados from the United Kingdom, the United States, and Europe must undergo quarantine for a period of 14 days.

As the PM updated the nation this afternoon at Illaro Court on local developments of the COVID-19 illness, she stated the decision was made in response to the three new cases of the coronavirus, where the virus presented itself in Barbadians coming from New York.

She indicated that from Sunday, March 22, 2020, nationals and non-nationals must either be quarantined or undergo self-quarantine.

Responding to a belief by some that Barbados should close its borders, the Prime Minister anticipates there will be an "overwhelmingly significant reduction" in flights from airlines including WestJet, American Airlines and Air Canada soon.

"We do not anticipate that there will be significant numbers at the airport. Why are we not closing it completely? Because at the end of the day this country still needs to be able to have access to the international world whether it is for emergency supplies, medical, emergency parts ... but we anticipate that the level of flights coming in and out of Grantley Adams International Airport will significantly reduce going forward."

"This morning I gave instructions that there is to be no shore leave and I also gave instructions that we will continue to facilitate the persons disembarking the ships to go to the Grantley Adams International Airport only in order to be able to take their flights out. The last flight for those persons will leave on Sunday and those who remain as crew, there will be no shore leave," explained Mottley.

Despite recent developments, the island's borders will remain open the PM reiterated. She also said the Barbados Port Inc has a responsibility to offer provisions to cruise liners as one of the region's home ports.

"I know this is something difficult for some of you to hear but you can’t have the benefits and not take also the responsibility, and the reality is we have had the benefits of homeporting for 15 years and regrettably this now the obligation that we have to carry out to those respective of provisioning."

Additionally, she disclosed that the decision to not close our borders was not a government decision but it came after discussions had taken place with all stakeholders such as the unions,  private sector, public transport, vendors and commerce, it was agreed that the borders must remain open because its closure meant severe "implications for cargo and has implications ultimately for the movement of people".

COVID-19: Barbados reports a total of 5 confirmed cases as of March 19