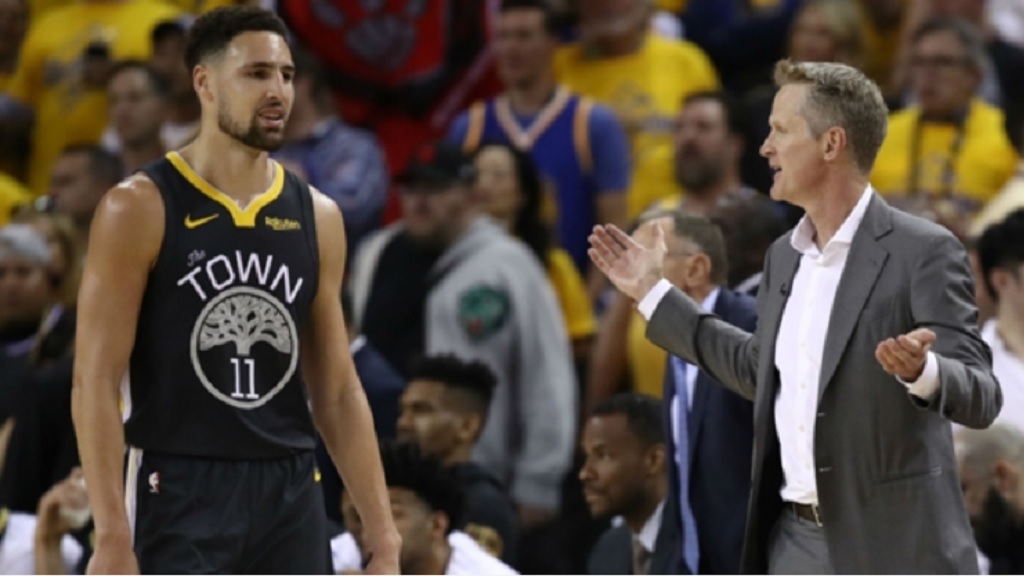 Klay Thompson (left) and Steve Kerr during Game 4 of the NBA Finals.

Steve Kerr insists the Golden State Warriors are going to "fight the whole way" after their hopes of a third successive NBA title suffered a severe blow on Friday.

Even with the return of Klay Thompson from injury, the Warriors fell to a 105-92 defeat in Game 4 of the Finals against the Toronto Raptors, who now require just one more win to secure a first championship in their history.

However, the Warriors know all too well that a 3-1 lead can be overturned, having been on the wrong end of a historic comeback by LeBron James' Cleveland Cavaliers in the 2016 Finals.

Kerr expects his players to show a reaction following back-to-back defeats on home court, with Game 5 taking place in Canada on Monday.

"So we'll go try to get one win and, if we can do that, come back here and see what happens."

The Warriors held a narrow lead at half-time but Toronto produced a stunning third quarter, outscoring their opponents 37-21 to seize control.

Kerr was quick to praise the Raptors, who were led by 36 points from three-time All Star Kawhi Leonard.

"We're playing a really good team that moves the ball. I think we have had our moments defensively, but we haven't been able to string together the stops over the course of a game that we have needed to," he said.

"I give them the credit. They have just played really well offensively, and they got a lot of threats out there, a lot of shooters, a lot of passers.

"So they're playing well, and we have got to do better."

Thompson had 28 points for the Warriors after missing Game 3 with a strained hamstring.