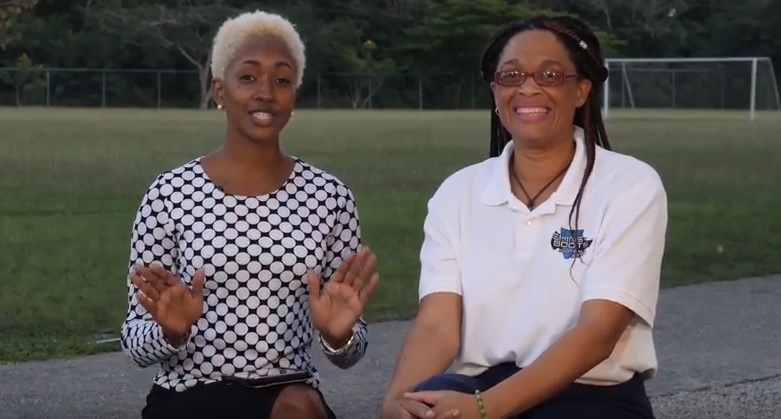 There is no doubt about it - Barbadians love football.

And then they are those whose appreciation for the game may be considered to be a bit more than that.

Should we call it an obsession? I'll let you decide. One thing you can know for sure is that this group's passion for the beautiful game has led them to create a football show for fans like no other.

While they are many shows out there for fans and experts alike to discuss the sport, the blend of knowledge, fanaticism and creative madness which goes into the show makes it truly unique. Loop spoke to two of its hosts who have been with it from the beginning and continue to be as its likes on social media have raised to the thousands.

Kevin Branch, a messenger by profession and football fanatic by passion, coordinates the show. His experience in media through previous jobs and love for the game created a clear path for him to share his passion with the world:

"'Shins N Boots' is a locally produced online football show and it is basically a fan show. We get the fan side of the football experience - the slogan is 'For the Fans, By the Fans'.

"I worked in media before... and watching sports I realised you never really had an avenue where the fans could just be fans, so this idea was knocking around in my head from about 17-years and it only came to light about five years ago."

And persons are loving the show, with likes on their Facebook page climbing to over 5000 and football fans from all over the world praising its content. This was not always the case however, as Kevin explained:

"You know that old cliche that speaks to hard work, dedication and following your dreams and all of that, it's actually true.

"There was a point I was going to give it up, but I stuck with it and that is paying off."

While noting that there are many features of the show which make it unique, Kevin gave examples of some of the quirks in specific episodes which make it appealing:

"I remember one show where Omowole [Omowale Johnson is one of the three original contributors to the show and a regular hosts] taped his mouth shut, because he didn't want to say anything about that particular game. So I told him to blink once for 'yes' and two for 'no' and that episode had everyone cracking up.

"Then there was one where we gave the ten commandments of football and George spoke with that booming voice, while listing them out.. and of course the commandments were so funny that we had great feedback about it."

And not only has the programme grown in viewership, but also in those interested in hosting and being part of it. George Bend, another host who has been with the show from the beginning, spoke about this development:

"We have some persons who became hosts by visiting the programme and deciding they wanted to be a part of it. So now we find that it's moved from the three of us to six of us now, including two females."

The retired teacher also dived into how the show came to be:

"We got to know each other by a common interest - that is supporting the same football club, Chelsea Football Club - and we would see each other regularly when we go to watch games, so a friendship naturally developed.

"We shared a lot of things in common, we had ideas that were similar and so on... we became friends so much to an extent that even when I was working - I am retired now - and from that time until now we called each other every morning to discuss football.

"Even when I was working that was the first thing we did on mornings and anytime we got throughout the day we would talk football generally and about Chelsea more specifically. So it wasn't really difficult deciding to be part of it when he asked me."

And you shouldn't be surprised if you found yourself being part of it randomly someday either. As Kevin explained, one of the newer hosts  Karma Warrington, joined after they did an interview with her at a bar:

"We did an interview with her at Aeon Bar and Grill and George said, why don't you get her to hosts the show. So I asked her, she came on and that was it!"

And she fits perfectly with the concoction of personalities - after all, you can't have a football team without filling each position:

"The crew we have now have different personalities, Mark Walcott who is the diehard Tottenham delusional fan, Renee Gay is the more intellectual Manchester United fan, Omowale Johnson and Dwayne Walker are Liverpool, so it balances itself out a bit. Plus the difference between the males and females bring really unique perspectives on everything."

When asked if the show is only for those who truly love and understand the sport, Kevin ensured that its entertainment value makes it engaging for anyone, even football novices:

"There is a girl named Claudia who knows nothing about football and she follows the show."

George added that by the time you're finished watching "you will learn alot, because there are segments which inform."

So looking to find out more about the sport before the upcoming Football WorldCup or want some Barbadiana in your coverage, check out the show 'For the Fans, By the Fans'.