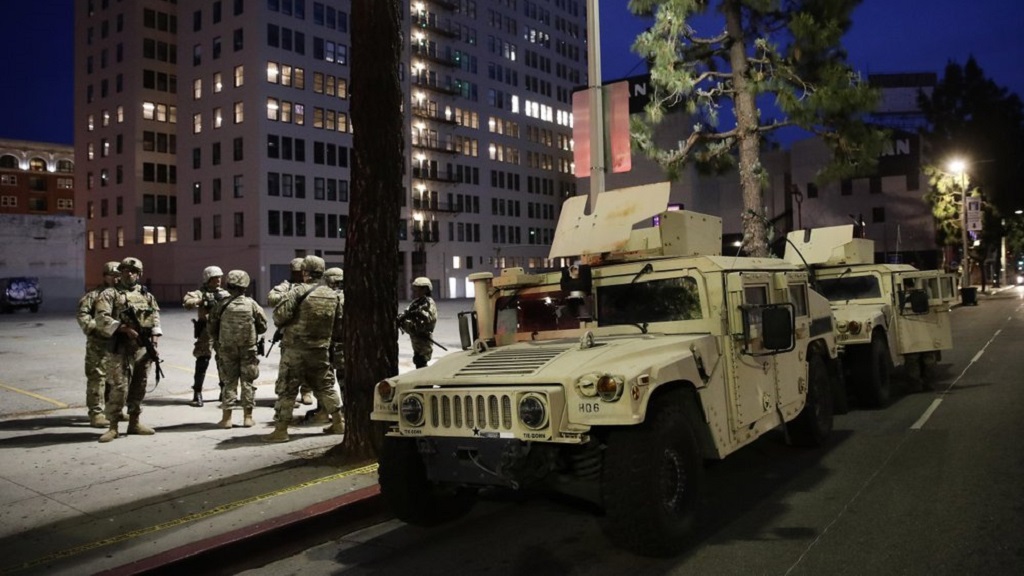 In France, family and friends of a French black man who died shortly after he was arrested by police in 2016 have called for a protest on Tuesday which will also pay homage to George Floyd.

(Video: Officers in Detroit used tear gas to enforce curfew restrictions during protests over the death of George Floyd.)

The circumstances of the death of Adama Traore, a French 24-old-man of Malian origin, are still under investigation by justice authorities.

Calls for Tuesday's protest in front of the Paris court come after some medical experts last week attributed the death to a cardiac problem, the latest in a series of conflicting medical assessments.

French police claimed Traore died of a heart attack due to pre-existing medical condition. His family said he died from asphyxiation from police tactics.

In a video message published on social media, Traore's sister Assa Traore calls for protesters to express their indignation "at a time when the world, when France is outraged by the death of George Floyd."

She denounced the latest medical experts' report as "racist" and "untrue."

(Video: Protesters in London are restrained by the authorities.)

The family wants the officers in charge of Traore's arrest to go on trial.

ALBUQUERQUE, New Mexico — A protest along the historic Route 66 into downtown Albuquerque turned violent early Monday after police reported demonstrators setting small fires and officers say they were fired upon.

Albuquerque police spokesman Gilbert Gallegos says officers reported shots fired at them in front of the historic Kimo Theater early Monday after a mostly peaceful demonstration disbanded. Gallego said there was damage to several properties in the area, including broken windows and some stealing from stores.

No injuries were reported.

Before the chaos, hundreds of people on Sunday marched down historic Route 66, protesting the death of George Floyd.

Activist Arthur Bell told protesters there will be another demonstration Monday evening in front of Albuquerque Police Department headquarters, but that rally will be "different."

When The Associated Press asked Bell what he meant by "different," he said: "A general never gives out his tactics."

SYDNEY — Fearful of conflict, organizers have canceled a peaceful protest planned for Sydney over the death of George Floyd in the United States.

A rally planned at Sydney's downtown Hyde Park for Tuesday was canceled on Monday after people threatened to create "havoc and protest against the event," an organizer said on social media.

The rally was presented as a peaceful protest against the overrepresentation of indigenous Australians in Australia's criminal justice system as well as in solidarity for Floyd who was "brutally and inhumanly murdered."

Organizers posted that "although Australia is far from where the murder took place, we have a voice."

Thousands of protesters are expected at similar rallies planned for the Australian cities of Melbourne, Brisbane and Adelaide on Saturday.

TEHRAN, Iran — In Iran, which has in the recent past violently put down nationwide demonstrations by killing hundreds, arresting thousands and disrupting internet access to the outside world, state television has repeatedly aired images of the US unrest.

Foreign ministry spokesman Abbas Mousavi urged the US government and police to stop the violence against their own people during a press conference in Tehran on Monday.

"To American officials and police! Stop violence against your people and let them breathe," Mousavi said and also sent a message to the American people that "the world is standing with you." He added that Iran is saddened to see "the violence the US police have recently" set off.

BEIJING — Chinese state media has weighed in on the protests in the US, comparing them to last year's violent anti-government demonstrations in Hong Kong that Beijing accuses the US and other foreign forces as encouraging.

In an editorial Sunday, the ruling Communist Party newspaper Global Times said Chinese experts had noted that US politicians might "think twice" before commenting again on issues in Hong Kong, knowing that "their words might backfire on them one day."

That followed a commentary on state broadcaster CCTV Saturday that described the violence between police and protesters in the US as "cup of bitter wine distilled by the US politicians themselves." Racism, the commentary said, is the "darkest shadow on American history and the scar that will not heal."

Chinese foreign ministry spokesman Zhao Lijian said Monday that the protests in various American cities "once again reflect the racial discrimination in the US, the serious problems of police violent enforcement and the urgency of solving these problems." China hopes the US will "safeguard and guarantee the legal rights of ethnic minorities," Zhao said at a daily briefing on Monday

The protests are an opportunity for China to allege double-standards and counter criticism from foreign governments and the Western media over its handling of the Hong Kong protests, its treatment of Muslim minorities in the northwestern region of Xinjiang and other human rights issues.

SAN FRANCISCO — The state Department of Human Resources sent a directive to close all California state buildings "with offices in downtown city areas" on Monday, a sweeping mandate that covers everything from Department of Motor Vehicles offices to those that license workers and provide health care.

"After consultation with the California Highway Patrol and Office of Emergency Services, the decision was made this evening to advise all state departments with offices in downtown city areas to close tomorrow, and to notify staff of the decision," said Amy Palmer, a spokeswoman for the state Government Operations Agency.

The directive was sent Sunday evening and it was left up to officials at individual agencies to determine which buildings should be closed.

A state Department of Justice memo sent to employees said the attorney general's offices in Sacramento, Oakland, San Francisco, Los Angeles and San Diego would be closed, though employees who can work from home should do so.

"Staff assigned to these offices should not report to work for any reason. Staff who are able to telework should continue to do so despite the office closures," the memo said.

Earlier, police said protesters smashed windows at the federal courthouse, and authorities on loudspeakers declared the gathering a civil disturbance.

Thousands of people marched throughout Oregon's largest city on Sunday, the third day of George Floyd protests in Portland. For much of the afternoon and evening protesters were largely peaceful, but there were reports of increased violence directed at police into the night.

BOSTON — A Sunday afternoon of mostly peaceful protests in Boston broke at nightfall when protesters clashed with officers, throwing rocks, breaking into several stores and lighting a police vehicle on fire.

Boston police tweeted that at least 40 people had been arrested as of 3 a.m. Monday. Police said seven police officers had been hospitalized and 21 police cruisers were damaged.

A National Guard unit had been called in to help quell the clashes.

Republican Gov. Charlie Baker called the violence "criminal and cowardly" in a tweet. The nighttime destruction was a stark contrast to the several protests earlier Sunday that featured thousands of demonstrations marching peacefully.

The article, published with photos, said hundreds of protesters gathered in front of the White House chanting "No justice, no peace." It also said there were demonstrations in Minneapolis, New York, Denver, Chicago, Los Angeles and Memphis and that the protests were expected to grow further.

The protesters marched from Aotea Square to the US consulate, where they kneeled. They held banners with slogans such as "I can't breathe" and "The Real Virus is Racism." Hundreds more joined protests and vigils elsewhere in the country, on a day that was a public holiday.

The protests were peaceful. Protesters said they were also standing up against police violence and racism in New Zealand.