Watch: A "Diamond proposal" on the road with Aura 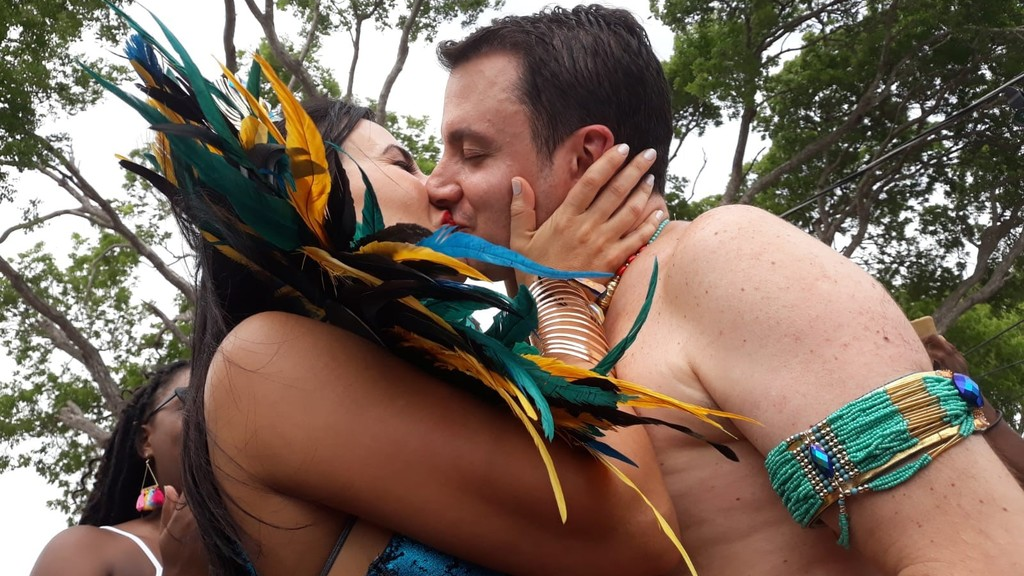 Grand Kadooment got an extra special touch on Monday when Alex Petalas surprised his girlfriend of one year with a marriage proposal on Aura Experience's V.I.P truck.

In the midst of the festivities, Petalas, 44, told the group of onlookers that his girlfriend Ingrid Robinson, 35, was his best friend and since the day they met, she shone like a diamond. He got down on one knee and popped the question.

The tourists met at a members-only club in San Franciso called The Battery Club in July last year when they went out to party with a few friends.

Since then, the two have traveled all over the world to countries such as Colombia, Aruba, South Africa, South Korea, London(twice) Italy, Greece, New York and Barbados to name a few.

Robinson told Loop she had a slight clue that Petalas was going to propose to her on this vacation trip but she thought it was going to be on Tuesday.

"I didn't think he was going to propose to me in a carnival costume. I feel ecstatic..I'm so excited!!!!"

Robinson, who works for a Pharmaceutical company in San Francisco, and Petalas who works in Commercial Real Estate, were just on a "fun trip" but tears started to flow on the Aura Truck when Petalas got down on one knee.

Petalas, who grew up in London, said that he wasn't too afraid to pop the question because he knew "1000 percent she would say yes!"

"She shines bright like a diamond so I decided to ask the DJ to play that song as I proposed," he said, referencing the Rihanna hit single.

Robinson, who grew up in New York, described Barbados as 'the friendliest most beautiful island' they have ever visited.

"We're loving it," she declared.

Robinson's advice for all the single girls is to keep the faith.

"For all the single girls out there, I thought I lost hope but your person is still out there."

"My advice to all the men out there is to never settle. You will always find that diamond."

The couple is scheduled to return home at the end of this week.

Watch: Man proposes to girlfriend of 20 years with shark proposal