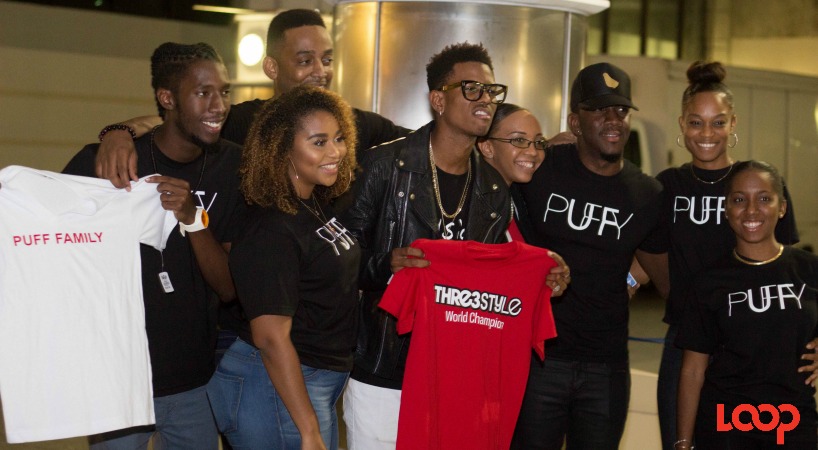 DJ Puffy, who #UpDeTing in Santiago, Chile and received first prize for his efforts, was greeted on the tarmac by Stephen Lashley Minister of Culture Sports and Youth; Neville Boxill, Senior Director and Acting CEO of the Barbados Tourism Marketing Inc, and Carolyn Shepherd, Director of Marketing at Digicel.

Descending the stairs from the Avianca Airlines jet, Puffy was also given a rousing congratulatory welcome by an energetic tuk band, dancers and stilt walkers. One stilt walker presented him with a Barbados flag upon airport entry.

But the congratulations did not stop there on the outside, Puffy was ushered to the Grace Adams suite for more celebrations of a formal nature.

Neville Boxill of the BTMI, in congratulating Puffy, said, "Andre 'DJ Puffy’ Parris walked away with the Red Bull Thre3Style championship, not only placing Barbados on the map, but representing the entire Caribbean region through his musical selection."

“It’s definitely an honour to manage such talent.”

Furthermore, he added that the talent that the world saw in Puffy for the first time last week, “I’ve been seeing it for almost six years and it’s a really good feeling to showcase that on the world stage."

Puffy humbly expressed his thanks and gratitude to the members of his reception party saying, "After being told many things about my career, I just think it's an honour to change people's minds, to change the way people see things like deejaying, and other entertainment and careers in the art."

Speaking about the experience, having met and interacted with other established disc jocks, Puffy said that it was a priceless. In terms of winning the entire competition, he said that was secondary and added, "It was a vibe. I just enjoyed myself. I turned it into a party. It was no longer a competition. I was like, ‘Yo, these people here to have a good time, and that is what #3Style is, a party rocking competition’."

Minister of Tourism, Richard Sealy and the Minister of Culture, Sports and Youth, Stephen Lashley lauded DJ Puffy for his amazing accomplishment and indicated he was an inspiration to youth and entrepreneurs not only in Barbados but across the world, to encourage them to follow their dreams.

Sealy highlighted, "These people don't know our language and we saw the way they reacted to Rupee, King Bubba, Hypasounds, and Rihanna... That's good for Barbados for promoting Barbados."

Lashley pointed out, "When DJ Puffy went onto the international stage in Chile, he would've been taking with him and not even knowing some of the aspirations of many Barbadian people and indeed his acclaim and victory would also hold out tremendous hope for young people all over the world."