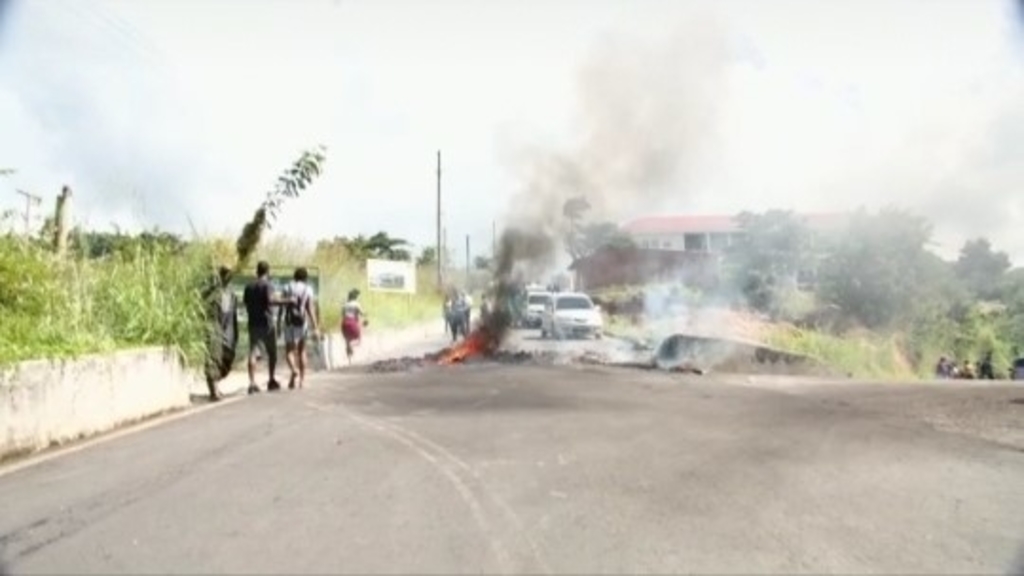 Visitors and returning nationals to Dominica were forced to walk from the airport on Wednesday as residents blocked all access roads with burning debris.

With just two days before the general election emotions are high.

In the Marigot constituency, which is represented by opposition leader Lennox Linton, roadblocks were seen every 50 to 100 meters. Known DLP supporters aren’t welcome, and unfamiliar faces, strangers to the area, are made to answer a barrage of questions before being allowed into the area.

Residents of the UWP stronghold said after years of being victimised and neglected, they have an axe to grind with the Prime Minister. They vowed not to stop until all their concerns are acknowledged and addressed.

One of their major concerns is the absence of a hospital or properly equipped health center in the area. Speaking on condition of anonymity, one resident said: “We have been without a hospital or proper health center for the last five years. The blind can see that Skerrit is all about himself. He already has a mansion but building another one. All this while some people are still struggling to recover from Maria.”

Loop News caught up with UWP leader Lennox Linton who was walking in the company of his constituents. He endorsed their claims, adding that PM Skerrit is the chief lawbreaker in Dominica.

Linton said the current state of affairs on the island is a direct result of the Prime Minister's violation of the constitutional rule of law.

“Where else in the civilised world do you find a situation where it takes more than ten years for an independent electoral management body to put arrangements in place to have a sanitised list of electors and ID cards for voting? I suggest to you, nowhere else. But that’s the responsibility of Roosevelt Skerrit.”

He said the people of Dominica are feeling the weight of oppression meted out by the Skerrit administration, where one man is standing against their desires.

“He is the one responsible for where we are. Everybody is asking for peace but nobody is asking about the justice that is being denied the people of Dominica, by one man, Roosevelt Skerrit,” he told Loop News.

Linton said the nation's youth now feel compelled to resist the oppressive abusive behaviour of the head of government, who he contends, wants to deny them a free and fair election.

He said Skerrit wants to decide for them who their next government should be. He is urging those who genuinely care about Dominica, to speak on the issues.

Despite the deck being stacked against them, Linton said he’s confident of his party’s chances when Dominicans go to the polls on Friday.