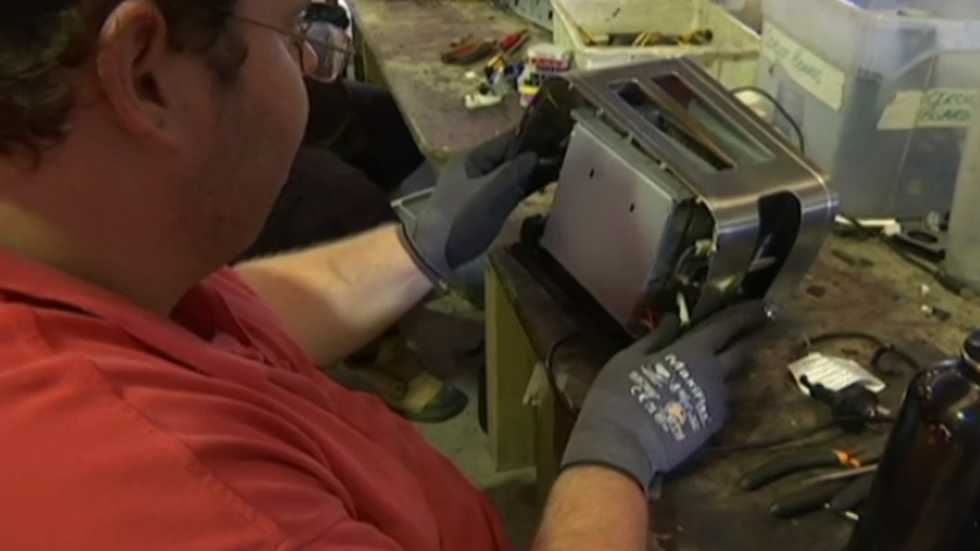 It's hot and sweaty work pulling apart 150,000 kilogrammes of e-waste in a year but no one calls in sick. "It's better than staying at home being lonely," says one participant.

"It's a game changer for them in their lives – that's what we're about," says the founder of the company Substation33 Tony Sharp.

Nathan Shaw is designing 3D printers from dumped parts destined for landfill. "A lot of it comes from TVs and computer monitors," he says.

Tony Sharp's volunteers are all long-term unemployed and desperate for a new start.

"People can grow and change really, really quickly. It's a fast road to success if you get it right," says Tony.

The team has come up with some amazing green inventions: an electric bike powered by old laptop batteries, solar run amplifiers and portable power banks to light up remote villages in Indonesia.

"So these are recycled paint cans recycled laptop batteries inside," says one of the trainers.

Its biggest project is a series of real-time flood warning signs. There are already 35 operating in the Brisbane area of Logan.

In the last year, 50 trainees have found jobs back in the workforce. Ten more jobs have been created in-house for those who didn't want to leave.

"Some of the things I'm doing I never imagined I would have been able to do any of this until I came here," says volunteer Jeniefer Bacorro.

"Understanding how makerspaces can help people from low socio-economic background, people who are marginalised, financially marginalised, do something good in their lives," says Dhaval Vyas from QUT.

It's an innovation hub doing its bit to save the planet and change lives.