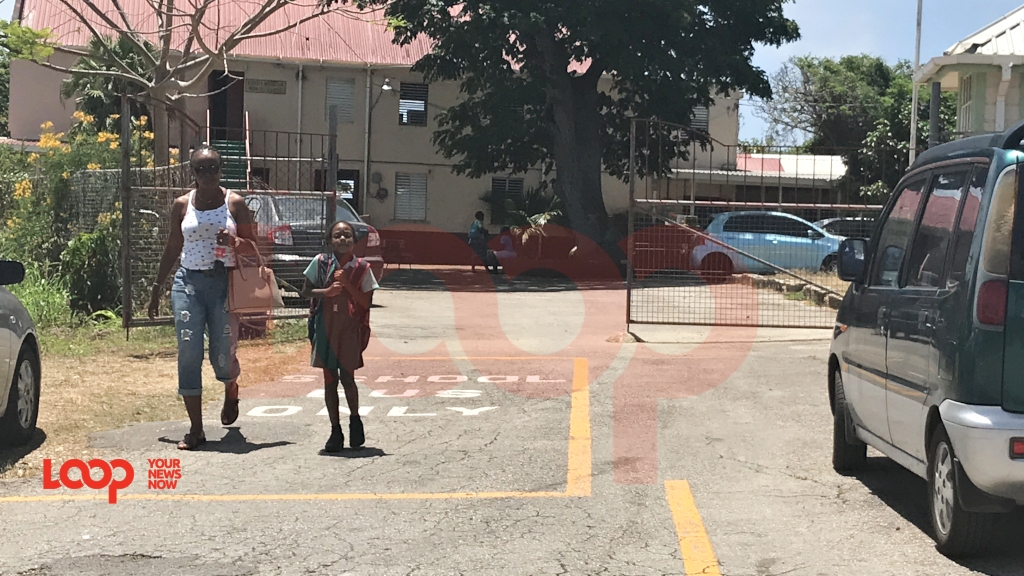 Rosemary Griffith-Worrell leaving the school with her grand-daughter after attending the meeting.

According to the parents and guardians who have children and wards enrolled at the Elliott Belgrave Primary School, formerly Boscobel Primary in St. Peter, the school is officially closed.

This news was revealed as they exited the school's compound with their charges in tow.

Today, some concerned parents gathered at the school from after 8:00 am in the hopes of having a meeting with Principal Norma Worrell, however, after hours of waiting under the big tree in the schoolyard, they were reliably informed by Education Officer Hyacinth Griffith, instead.

The unplanned meeting with the disgruntled parents totalling approximately 15, was held outside the Principal's office and the Education Officer spoke to the staff and parents in unison. The meeting proceeded after the staff and students of the school returned to the premises around 10:45 am. The school was evacuated due to smoke this morning.

Relaying the meting's happenings as she walked out the school gates, Debra-Lee Griffith told the media:

"We are not being advised adequately in my opinion because they closed the school for the rest of the week, that is tomorrow. What is happening on Monday? They don't know. I'm free to call the Ministry myself. It is nonsense!

"If it is that the school was given a clean bill of health on Monday, why is it being closed today?"

"We asked questions and the questions are not being answered. Right now I'm not pleased. [...] And they are saying it's closed for the rest of the week. They are not saying until further notice so we don't know if we should bring the children back on Monday."

The school is to be closed for industrial cleaning.