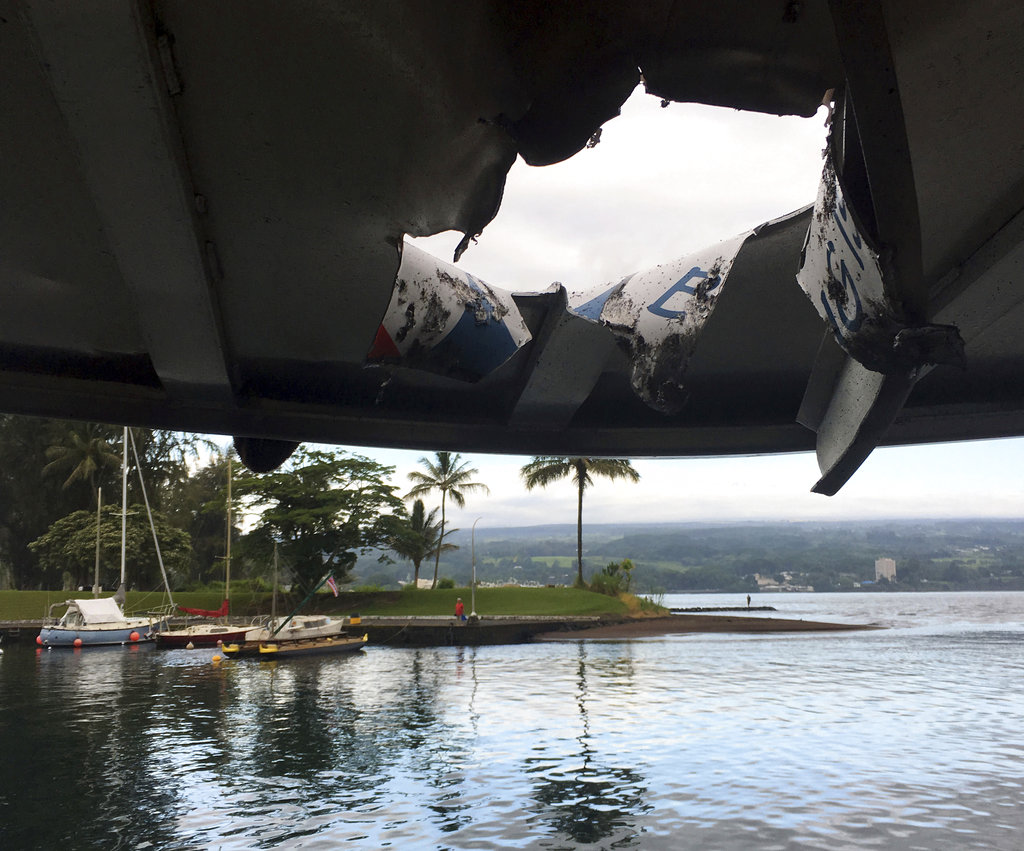 This photo provided by the Hawaii Department of Land and Natural Resources shows damage to the roof of a tour boat after an explosion sent lava flying through the roof off the Big Island of Hawaii Monday, July 16, 2018, injuring at least 23 people. The lava came from the Kilauea volcano, which has been erupting from a rural residential area since early May. (Hawaii Department of Land and Natural Resources via AP)

An explosion caused by lava oozing into the ocean sent molten rock crashing through the roof of a sightseeing boat off Hawaii's Big Island, injuring 23 people Monday, officials said.

They were aboard a tour boat that takes visitors to see lava plunging into the ocean from the long-erupting Kilauea volcano that has been vigorously shooting lava from a new vent in the ground for the past two months.

The U.S. Geological Survey says explosions of varying sizes happen whenever 2,000-degree (1,093-degree Celsius) lava enters much colder seawater. Some of those explosions can be so tiny they are hard to see. But when the conditions are just right, much larger explosions send molten rock and other debris high into the air, according to USGS geologist Janet Babb.

volcano that has been vigorously shooting lava from a new vent in the ground for the past two months.

A woman in her 20s was in serious condition with a broken thigh bone, the Hawaii County Fire Department said. She was transported to Honolulu for further treatment, said Hilo Medical Center spokeswoman Elena Cabatu.

Twenty-two others suffered burns and scrapes, including 12 that were treated at the Hilo hospital and released.

Shane Turpin, the owner and captain of the vessel that was hit, said he never saw the explosion that rained molten rock down on top of his boat.

He and his tour group had been in the area for about 20 minutes making passes of the ocean entry about 500 yards offshore, Turpin said.

He didn't observe "any major explosions," so he navigated his vessel closer, to about 250 yards away from the lava.

"As we were exiting the zone, all of a sudden everything around us exploded," he said. "It was everywhere."

Turpin said he had no idea just how big the blast was until he saw video of the event later on shore.

Monday's large blast may also be related to the undersea landscape and the amount of lava being produced by a fissure miles from the coast.

"How high and how far really depends on the vigor of the steam explosion, and that depends on the amount of lava going into the ocean," Babb said. "Based on a lot of years of observations of ocean entries," USGS estimates these explosions can send debris up to 300 meters in any direction.

In a flow that reached the ocean in 2016, the lava "hit a steep slope and was very quickly carried down to deeper parts of the ocean," Babb said. But the offshore topography of the new ocean entry is shallow, meaning explosions could occur much closer to the surface.

And the volume of lava now entering the ocean is much higher than in previous eruptions, Babb said. The active eruption site is sending as much as 100 cubic meters of lava per second snaking down to the sea. In the 2016-2017 flow to the south, there was only about 4 cubic meters per second being erupted.

Turpin, who has lived on the Big Island since 1983, said that he has been observing and documenting these explosions and that this type of activity is new to him. There were no warning signs before the blast, he said.

He said he had visited one woman who sustained serious injuries in the hospital.

"They're unbelievable people," he said of the woman and her family, who are visiting the island. "Just really good people."

The others in the tour group quickly pulled together helped one another, Turpin said.

"What I saw in humanity this morning was amazing. I mean this was a group of people that never met before, and they were brought together," he said. "In all honesty, we definitely evaded a catastrophic event today."

Officials have warned of the danger of getting close to lava entering the ocean, saying the interaction can create clouds of acid and fine glass. Despite the hazards, several companies operate such tours. The Coast Guard said tour vessels have operated in the area going back at least 20 years.

The U.S. Coast Guard in May instituted a safety zone where lava flows into the ocean off the Big Island. It prohibits vessels from getting closer than 984 feet (300 meters) from ocean-entry points.

The agency allows experienced boat operators to apply for a special license to get up to 164 feet (50 meters) from where lava sizzles into the sea.

Kilauea volcano has destroyed more than 700 homes since it entered a new phase in May. But the only serious injury over the past two months was to a man who was hit by flying lava that broke his leg.

Officials were interviewing injured passengers at a hospital.