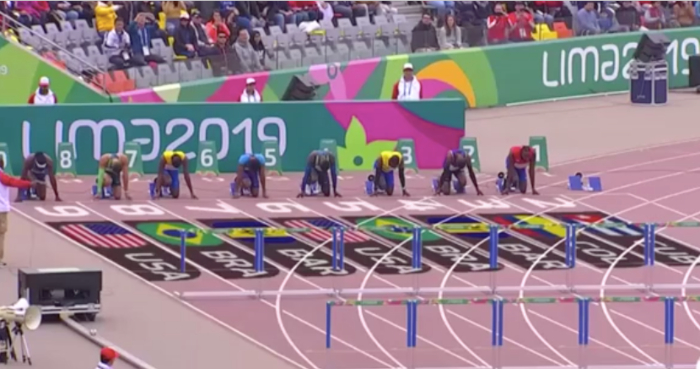 Shane Brathwaite makes history for Barbados with his gold medal at the just concluded 2019 Pan American Games in Lima, Peru.

Barbados has been participating in the competition for the past 56 years, with the first appearance being back in 1963, but it was this year that a hurdler overcame all obstacles except one to write Barbados' name in the Pan Am history books for a gold medal. On Saturday evening, August 10, 2019, before the curtain came down on the games, Brathwaite left it all on the field and his best was enough. He knocked over hurdle number three but that did not throw him off nor did it slow his pace.

Brathwaite won the 110-metre hurdles in 13.31 seconds. This was a season-best for the Bajan athlete who just nipped USA's Freddie Crittenden on the line. Faster on the run, Brathwaite took the gold and put his name in the annals of history.

"ENERGY!!
"To become the first Barbadian to win gold in Pan Am games history is truly an amazing feeling. Thanks to my family, coaches, friends and training partners your continual support. Thank you to all my old and new supporters. All praises to the most high 🙏🏾🙌🏾
"#hurdles #barbados #panamgames#sacrificetraining #TGElite #blessed#thankful"

Third place in the 110-metre hurdles went to Brazil.

Trinidad and Tobago to host the 2021 Commonwealth Youth Games