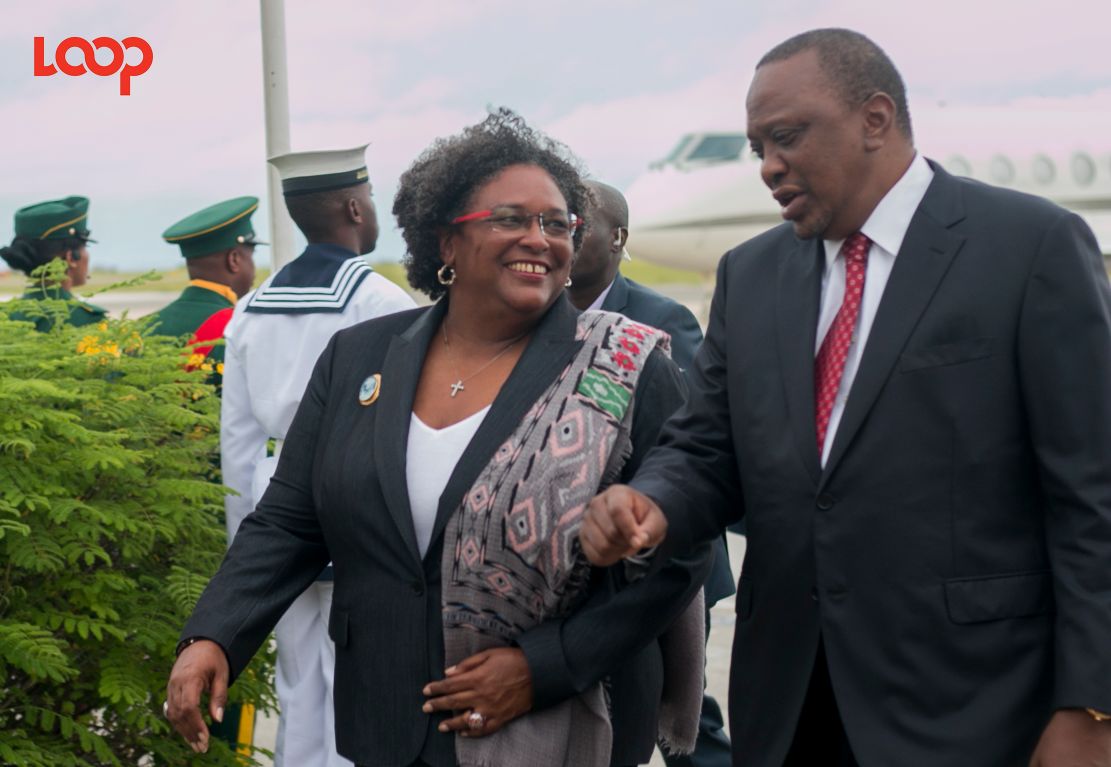 Prime Minister of Barbados Mia Mottley and President Uhuru Kenyatta have a tête-à-tête.

The President of Kenya, Uhuru Kenyatta is in Barbados.

On his first trip to the Caribbean, President Kenyatta is spending six days. His first stop was in Jamaica and then he flew directly to Barbados for the second half of his tour. Prior to this Caribbean trip, the President had visited Cuba in 2018.

Today he arrived in Barbados three hours after planned originally, due to flight delays from Kingston, however, his reception once on Barbados soil was still filled with pomp and fanfare from the Grantley Adams International Airport to Government House.

On the tarmac the President was met with a 21-gun salute and the Barbados Defence Force band - the Zouave Band, played the anthems of both Barbados and Kenya. President Kenyatta was greeted by Prime Minister Mia Amor Mottley and after inspecting the guard he met the Minister of Foreign Affairs and Foreign Trade, Senator Dr. Jerome Walcott, Minister of Information, Broadcasting and Public Affairs, Senator Lucille Moe and other government officials.

Then, President Kenyatta introduced Barbados' Prime Minister to his Cabinet Secretaries including Monica Juma who is responsible for Foreign Affairs in Kenya.

Prime Minister Mottley and President Kenyatta were very jovial holding hands and sharing laughs as they chatted and moved from the plane to the dais, through the guard and while departing the tarmac to head to the Grace Adams Suite.

President of Kenya arrives in Barbados

According to reports, the purpose of the official visit is to strengthen bilateral relations between both countries in areas of mutual interest.

Following the airport welcome ceremony, the President and First Lady went on to pay a courtesy call on Governor-General Dame Sandra Mason before attending a reception at Government House.

In Jamaica for three days as well, prior to flying to Barbados, media reports indicate that President Kenyatta is also working on deepening bilaterals with Jamaica, however, one Kenyan journalist in Barbados for the presidential visit shared that in Barbados there is to be a focus on bilateral relations, tourism and sports.