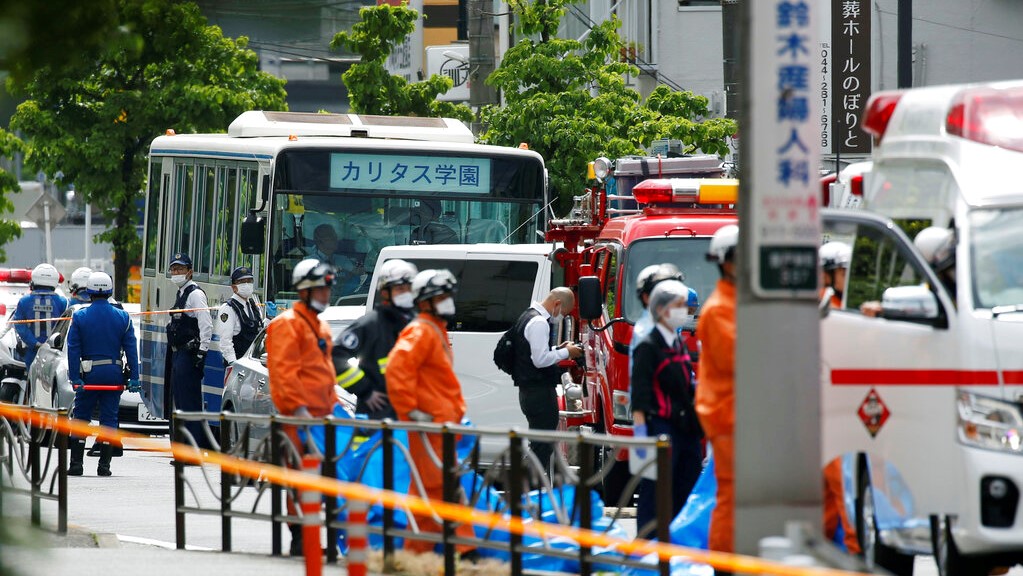 A school bus, centre, is parked at the scene of an attack in Kawasaki, near Tokyo Tuesday, May 28, 2019. A man wielding a knife attacked commuters waiting at a bus stop just outside Tokyo during Tuesday morning's rush hour, Japanese authorities and media said. (Kyodo News via AP)

The Latest on a stabbing attack at a school bus stop in a city outside Tokyo (all times local):

The head of a Japanese school has condemned a "savage" knife attack on students waiting for a school bus in which a 6th-grade student and a parent were killed, and said he is struggling to contain his anger.

Tetsuro Saito, the head of Caritas Gakuen, told a news conference that "My heart is broken with pain when I think of the innocent children and their parents who send their children to our school with love who were victimised by this savage act. I'm struggling to fight back my anger."

Authorities say an 11-year-old girl and a parent of another student were killed and 17 others were injured Tuesday by an attacker carrying a knife in each hand. Most of the injured were students at the Catholic school.

Police seized the attacker but he had slashed his own neck and was pronounced dead at a hospital. His motive wasn't immediately known.

Local resident 1 (name not given): "No criminal case happened before near Noborito Station. It's quite peaceful here. I'm so upset to see such a vicious incident."

Local resident 2 (name not given): "It's too cruel in terms of humanity. It's shocking."

Japan's Prime Minister Shinzo Abe has described a fatal stabbing spree near Tokyo as harrowing, adding that he is outraged and will take all necessary measures for children's safety.

Authorities say a man carrying a knife in each hand attacked schoolgirls waiting at a bus stop in Kawasaki, just outside Tokyo on Tuesday, wounding 16 people and leaving three dead, including himself. Most of the injured were schoolgirls at a Catholic school.

Abe said: "It was an extremely harrowing incident in which many small children were victimized, and I feel strong resentment... I will take all possible measures to protect the safety of children."

U.S. President Donald Trump has offered his sympathy to the victims of a mass stabbing attack just outside Japan's capital.

Trump is finishing a state visit to Japan and was on stage with Prime Minister Shinzo Abe when he made the comments about Tuesday's attack.

He said: "I want to take a moment to send our prayers and sympathy to the victims of the stabbing attack this morning in Tokyo. All Americans stand with the people of Japan and grieves for the victims and their families."

An official at the Kawasaki city office told the AP that 16 people, most of them schoolgirls, were wounded and three others were believed killed, including the attacker.

NHK TV in Japan is quoting police as saying the suspect in a knife attack that wounded at least 19 people at a bus stop just outside Tokyo has died.

Police wouldn't publicly confirm the reports and it wasn't clear how many had died in Tuesday's attack.

The local fire department told The Associated Press that one person had died.

Some Japanese media outlets are reporting at least three deaths, while some are saying two, including the attacker.

Reports said the attacker approached a group of children at the bus stop with a knife in each hand screaming "I will kill you!"

Authorities say at least 16 people, including elementary school children, have been stabbed in an attack in Kawasaki, outside of Tokyo. One adult and one child have died.

Fire officials tell the Kyodo news agency that a man has been detained in the attack.

It wasn't immediately clear how serious the other injuries are.