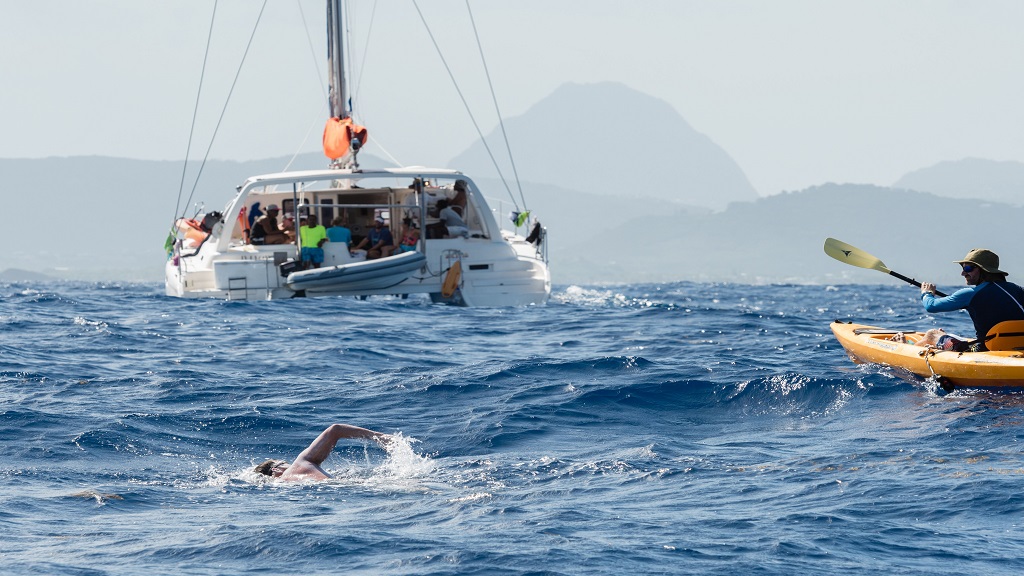 Bellamy began the 151 km swim across the channel on September 13, 2019, at 8.20 am from St Peter’s Bay, Barbados.   Accompanying him on this journey was a support crew, backed by a team from Swim Barbados, headed by Kristina Evelyn, along with St Lucia Channel Swim organizers.

The swim began with calm seas which lasted throughout the day and was assisted by the full moonlight at night.  Bellamy entered Saint Lucian waters overnight and at dawn on Sunday, September 15, the team could see the coast of Saint Lucia about 30 miles out, which gave Bellamy the push he needed to get to the coast.

Due to the swift current, the expected “touch” time advanced from anywhere between 6 pm and 8pm,  to somewhere from 4 pm to 5 pm.  The strong current however, meant that the intended landing spot of Sandy Beach had to be moved and at 4:43 pm, after 56 hours and 26 minutes (unofficial) of swimming, Cameron touched a rock at Moule-a-Chique in Vieux Fort, Saint Lucia, marking the completion of his swim journey.

Scores of Saint Lucians gathered to witness history in the making, standing on jetties and the dock at the Vieux Fort Fisheries Complex, as the Marine Police vessel escorted Bellamy onto dry land.  Included in the arrival party was Cameron’s mother, Janita Bellamy, who was joined by Prime Minister of Saint Lucia - Allen Chastanet. Representatives from the Saint Lucia Tourism Authority and the Saint Lucia Hotel and Tourism Association, Bay Gardens Resorts’ Managing Director- Sanovnik Destang and members of the St Lucia Aquatics Federation, also formed part of the delegation that welcomed Team Bellamy into Saint Lucia.

In preparation for the challenge, Bellamy trained for weeks in Barbados, by completing three 24-hour swim challenges.  The swim from Barbados to Saint Lucia - a 94 mile expanse of open sea - was not the original swim feat that Bellamy had been planning, as his intention was to swim from Havana, Cuba to Key West, Florida when just 3 weeks ago, it was officially called-off due to permit regulation changes for the support boat.

Bellamy and his team were ecstatic at being the first group to complete the journey and thanked all those who were responsible for making this achievement possible.