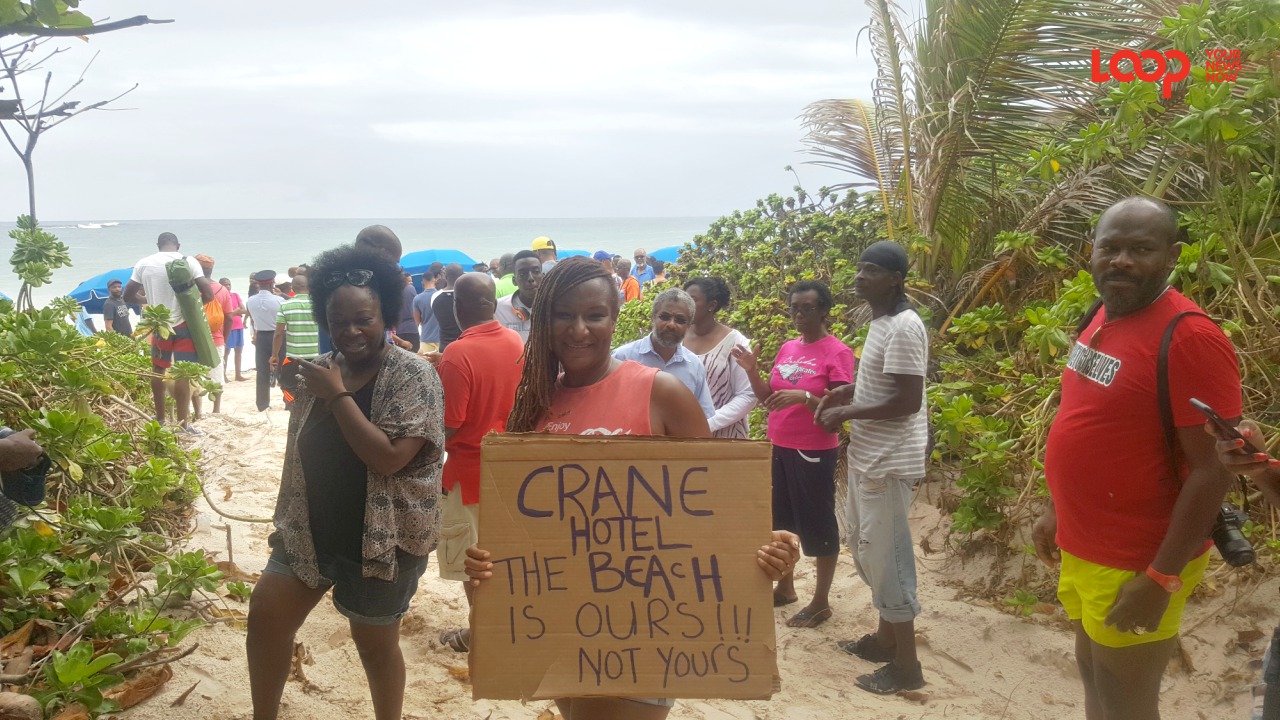 Supporters came out in their numbers.

Pleased with the number of persons who turned up at the Crane Beach today to protest despite the impending showers and overcast skies, Cultural Ambassador Dr. Anthony ‘The Mighty Gabby’ Carter says that it’s not over yet.

In an interview with Loop News, Gabby who turned 70 years old yesterday said that he never thought he would have to be singing ‘Jack don’t want me to bathe on my beach…’ and ‘Dah beach is mine!’ again in this manner decades after he first produced that record.

Related article :Birthday Big Up: The Mighty Gabby marks a milestone with protest

However, he asserted this is not the time to drop the ball.

“I will be on the ball until there is no doubt in anyone’s mind that we have total access to our beaches in Barbados forever!”

In terms of the crowd who gathered, some even carrying placards, Gabby said, “Wow it was bigger than I expected.” He said given the weather conditions he imagined “maybe 10, 20, 30 people” but he got a big crowd and he hopes that the owners and managers of the Crane Resort “get the message. We cannot afford to have any attempt at all to violate the rights of our people on any of our beaches.”

The protest was the brainchild of Activist Chynna Glasgow.

Going forward Gabby said as it relates to Crane’s issue with the beach vendors, “I believe that there will be dialogue,” and he placed the blame for the entire unfortunate situation on the shoulders of Crane Resort’s owner Paul Doyle and the National Conservation Commission (NCC). He said those two parties had every right to nip this in the bud in the early, instead of using antiquated laws to push agendas.

But despite the progress made today in the East, Gabby said the war is not over.

“This is the beginning. We don’t want to see this nonsense happening at Dover. We will go to Browne’s Beach in time to come because we have a situation where in front of that Boatyard they are bringing the chairs all the way down to the sea and telling people they can’t pass…

“We are on the ball; we will not let that happen!

“You’re going to soon hear about the protest by the Boatyard on Browne’s Beach.”

Then he went on to say that over the years there have been very subtle attempts to privatise beaches along the West Coast, and noting 11 windows to the sea, he asserted, “we want them opened again, we want access to the beach, easy access to the beaches.”

At the end of the day, The Might Gabby stressed that all persons need to “respect the fact, that the beach belong to we.”

PHOTOS: Bring laws to protect our beaches for the general public