Watch: The moment this guy proposed during Kes The Band pop up show 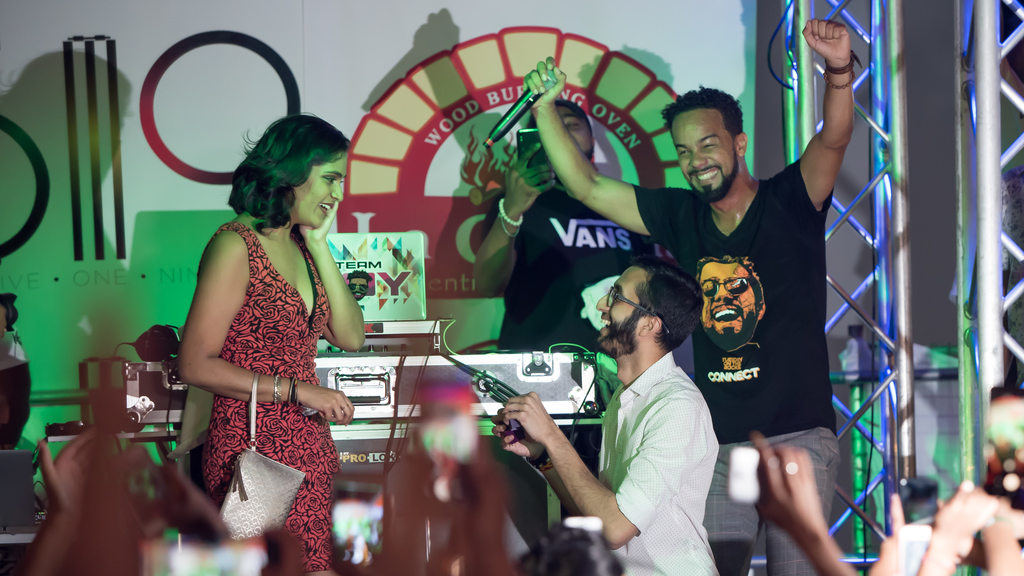 Years from now, one couple can look back and reminisce over the moment when one of soca's biggest stars was present during one of the most important moments of their lives.

Ishan Gosine gave his girlfriend, Keshala Mahabir, the surprise of a lifetime when he proposed to her during a Tuesday on the Rocks Pop Up Lime.

The event, which was hosted at 519 Restaurant in C3 Mall, San Fernando on Tuesday, took a special turn when frontman Kees Dieffenthaller called Ishan and his girlfriend, Keshala up on stage where he popped the question.

Loop contacted the newly engaged couple--who have been together for three years—and Ishan revealed that the onstage proposal was actually a last-minute move. He was initially supposed to propose in VIP in a more intimate setting, however, logistically it couldn't happen.

This led to Kees himself suggesting it be done on stage. The impromptu onstage proposal only added to the special moment and everyone, including Kees was thrilled as it all unfolded.

"If I knew it was going to be in front of the crowd onstage I would have been a bit more nervous. But in the moment it was just us, I didn't take on anything else. I remember hearing noise but I was just focused.”

"I kind of suspected something was going on because my friends were being kind of weird,” Keshala said with a laugh. “But I didn't expect any of what happened. When Kees called us up, I figured it was something huge...I was absolutely blown away."

Although a date hasn't been officially confirmed, the couple is looking to tie the knot sometime this year.

Kees on Road March: the people will decide

Watch: A "Diamond proposal" on the road with Aura

Watch: Man proposes to girlfriend of 20 years with shark proposal