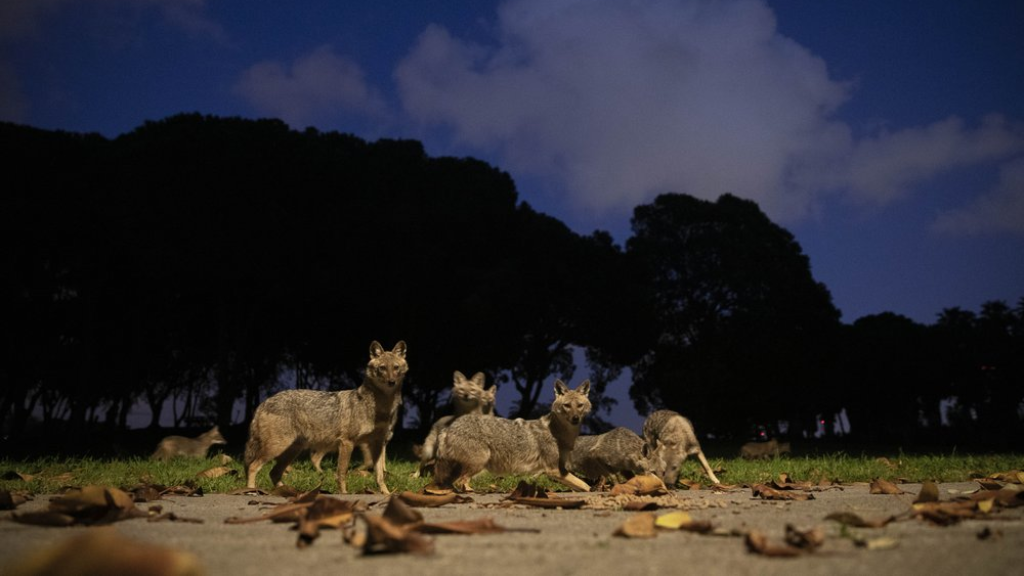 These maps made available by NASA show nitrogen dioxide levels over California during March 2-6, 2020, pre-shutdown against the COVID-19 coronavirus; March 9-13 during soft shutdown measures, March 16-20 when "shelter in place" orders were announced, and March 23-27 during a full period of "shelter in place" orders. NO2 is a noxious gas emitted by motor vehicles, power plants, and industrial facilities. (NASA/European Space Agency via AP)

As people across the globe stay home to stop the spread of the new coronavirus, the air has cleaned up, albeit temporarily.

Smog stopped choking New Delhi, one of the most polluted cities in the world, and India's getting views of sights not visible in decades.

Nitrogen dioxide pollution in the northeastern United States is down 30 percent. 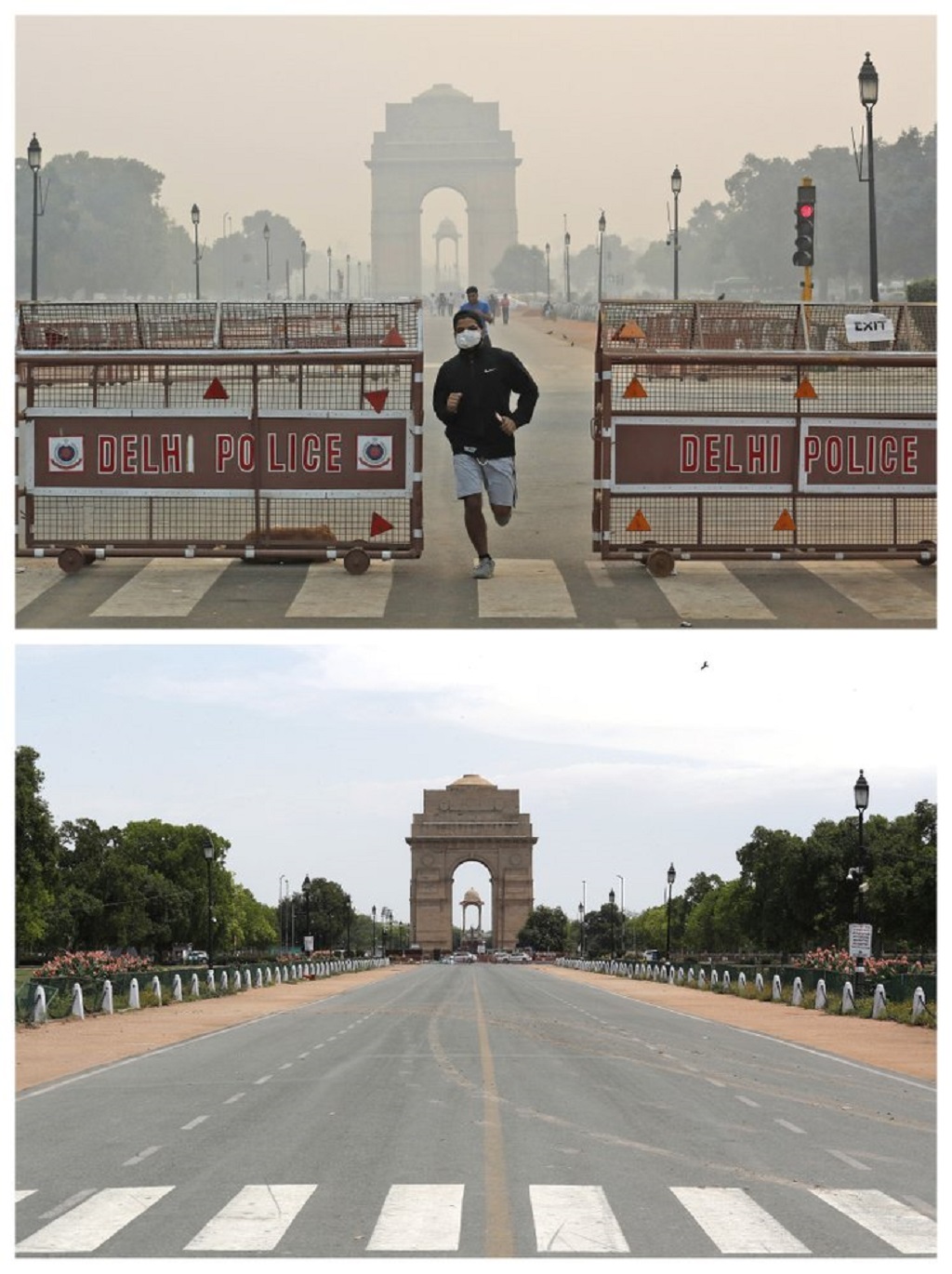 Rome air pollution levels from mid-March to mid-April were down 49 percent from a year ago.

People are also noticing animals in places and at times they don't usually. Coyotes have meandered along downtown Chicago's Michigan Avenue and near San Francisco's Golden Gate Bridge. A puma roamed the streets of Santiago, Chile. Goats took over a town in Wales.

In India, already daring wildlife has become bolder with hungry monkeys entering homes and opening refrigerators to look for food.

"It is giving us this quite extraordinary insight into just how much of a mess we humans are making of our beautiful planet," says conservation scientist Stuart Pimm of Duke University. "This is giving us an opportunity to magically see how much better it can be."

Chris Field, director of the Stanford Woods Institute for the Environment, assembled scientists to assess the ecological changes happening with so much of humanity housebound.

Scientists, stuck at home like the rest of us, say they are eager to explore unexpected changes in weeds, insects, weather patterns, noise and light pollution. Italy's government is working on an ocean expedition to explore sea changes from the lack of people. 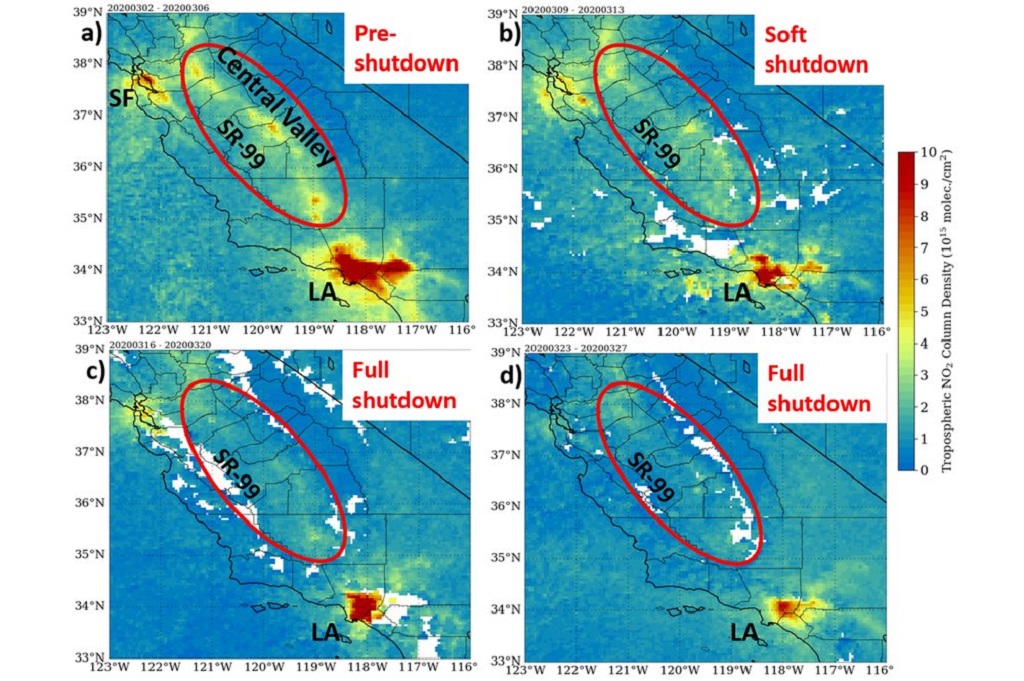 (Photo: These maps made available by NASA show nitrogen dioxide levels over California during March 2-6, 2020, pre-shutdown against the COVID-19 coronavirus; March 9-13 during soft shutdown measures, March 16-20 when "shelter in place" orders were announced, and March 23-27 during a full period of "shelter in place" orders. NO2 is a noxious gas emitted by motor vehicles, power plants, and industrial facilities. (NASA/European Space Agency via AP)

"In many ways we kind of whacked the Earth system with a sledgehammer and now we see what Earth's response is," Field says.

These types of pollution kill up to 7 million people a year worldwide, according to Health Effects Institute president Dan Greenbaum.

The air from Boston to Washington is its cleanest since a NASA satellite started measuring nitrogen dioxide in 2005, says NASA atmospheric scientist Barry Lefer.

Largely caused by burning of fossil fuels, this pollution is short-lived, so the air gets cleaner quickly.

"We're getting a glimpse of what might happen if we start switching to non-polluting cars," Lefer says.

Cleaner air has been most noticeable in India and China. On April 3, residents of Jalandhar, a city in north India's Punjab, woke up to a view not seen for decades: snow-capped Himalayan peaks more than 100 miles away.

And she notes early studies also link coronavirus severity to people with bad lungs and those in more polluted areas, though it's too early to tell which factor is stronger.

The greenhouse gases that trap heat and cause climate change stay in the atmosphere for 100 years or more, so the pandemic shutdown is unlikely to affect global warming, says Breakthrough Institute climate scientist Zeke Hausfather. Carbon dioxide levels are still rising, but not as fast as last year.

Aerosol pollution, which doesn't stay airborne long, is also dropping. But aerosols cool the planet so NASA climate scientist Gavin Schmidt is investigating whether their falling levels may be warming local temperatures for now.

Stanford's Field says he's most intrigued by increased urban sightings of coyotes, pumas and other wildlife that are becoming video social media staples.

In Adelaide, Australia, police shared a video of a kangaroo hoping around a mostly empty downtown, and a pack of jackals occupied an urban park in Tel Aviv, Israel.

We're not being invaded. The wildlife has always been there, but many animals are shy, Duke's Pimm says. They come out when humans stay home.

For sea turtles across the globe, humans have made it difficult to nest on sandy beaches. The turtles need to be undisturbed and emerging hatchlings get confused by beachfront lights, says David Godfrey, executive director of the Sea Turtle Conservancy.

But with lights and people away, this year's sea turtle nesting so far seems much better from India to Costa Rica to Florida, Godfrey says.

"There's some silver lining for wildlife in what otherwise is a fairly catastrophic time for humans," he says.

Reports suggest many have had coronavirus with no symptoms